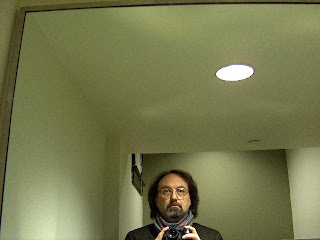 Bio: I was born near Metz, France in 1956. An air force brat, my family moved around a lot between postings throughout Canada and in the United States. I attended McMaster and Queen's universities, studying English literature. I worked for many years as a stagehand doing lighting for concerts and theatre. I've also worked for many years as an independent curator for galleries in Ontario and the Maritimes, as well as a freelance art critic writing for magazines in Canada, the United States, Europe and Australia. I've been publishing poetry in magazines since the late 1970s as well as self-publishing chapbooks, pamphlets and broadsheets of my work. My first trade publication, Dream Pool Essays was published by Talonbooks in 2001, followed by NonZero Definitions in 2004 and Last Scattering Surfaces in 2007. A collection of my writings on visual art - Gravity and Grace: Selected Writings on Art - was published by Gaspereau Press in 2001, the same year in which Heather and I married.


I'd waited so long for it that by the time it happened it was somewhat anti-climactic. I'd been through many years of disappointment and self-doubt (I was 41 when my first book was published) and had finally reached a place where I was a bit more at peace about it all. That beingsaid, I was (and still am) enormously grateful that Talon risked to take it on on the recommendation of an Ottawa-based poet now spending the year in Edmonton.


I moved to Colborne in June of 2000; my (now) wife, Heather, had moved here a few months previous to care for her aging mother. While it's the smallest community in which I've lived pop. 2000) since I was a kid, andwhile I've adjusted to and come to love the rhythms of the agricultural world that surrounds us (apple orchards, dairy and cattle farms, and the growing of feed corn, potatoes and soy), the physical landscape doesn't figure in my writing in any overt way. What does fit, however, are the cyclic, seasonal qualities of life, which matter to me a great deal. And the dark skies. I'm a very early riser (3:30 a.m.), so watching the seasonal changes in the constellations, the planets along the ecliptic (Venus is in the morning skies now), and the waxing and waning of the Moon are all vitally important to me in my everyday life and in mywriting as well.


I begin with a line, maybe an image, and poem grows from that. I don't (or extremely rarely) come to write with some sort of preconceived idea in mind, and when I do the poem usually turns out quite badly - a distortion of what a poem could have been if I'd let it take its own course. The work dictates where it will go. Sometimes that ends with a single poem, sometimes it leads to serial poems and poem sequences.


Neither, really, though Heather tells me that my work means more to her when she hears it me read it aloud. I enjoy doing readings, but I don't do that many so I've never discerned any impact on my writing.

I'm quite interested in meaning and metaphor, in the non-referential text that isn't just a template placed against something experiential that is then reported on to the reader.


Depends entirely on the editor. Some have been exceptional. I was very badly edited in a poetry magazine years ago that shall remain nameless,where the editor essentially rewrote my work. That was the worst experience. Most others have been extremely positive, both in terms of my poetry and my writings in the visual arts.


Nothing has changed at all. It remains extremely difficult.


Back in May. It was terrible.


Do the right thing.


10 - How easy has it been for you to move between genres (poetry to art writing)? What do you see as the appeal?


I can switch back and forth quite easily - between working on a poem sequence and working, say, on an essay for an exhibition I curated, or exhibition review. The latter are interpretive activities - which I quite enjoy - while the former is not.


I write everyday, though not necessarily poetry. I don't have a particular routine I follow. My day begins very early, and it usually (though not always) involves writing.


I simply step back and involve myself with other things. With any poem I write, I step away from the text as much as I can, try to forget it, distract myself, and come back to it later with hopefully fresh eyes and try to see it again for the very first time.


The internal structure of my books are much the same in that they comprise complete poem sequences, extracts from an open-ended poem sequence (The Julian Days), and a long poem.


The early minimalist music of Steve Reich and Philip Glass had a profound effect on my writing in the late 70s that coincided with my discovery of the L=A=N=G=U=A=G=E poets at the same time. My passion for science - particularly cosmology - has been tremendously influential, as well as the visual arts. I'm an artist as well as a curator and visual arts critic, so visual art and theory have had their way with me.


William Blake, absolutely at the top of the list. Too the French surrealists, Black Mountain, L=A=N=G=U=A=G=E. And I love the writing of critic George Steiner if only for the sheer joy of reading how he puts together a sentence that feels good in the mouth and mind. Beyond my work, the writing of the late German theologian Dietrich Bonhoeffer is pretty damn important (he was executed by the Nazis just before the end of WWII for his resistance to Hitler), Thomas Merton, Kathleen Norris... bpNichol had a huge impact as both a writer and a person because of the fact he afforded me respect and took me seriously when most others didn't. He treated me like an equal, and I will always be immensely grateful for that - his example kept me going during what were very dark times. I hope I'm able to do the same for others.


Do a retreat at a monastery.


Film editor (to answer the first question). I worked as a volunteer at a community accessss cable channel in the mid-1980s, and found that editing together shows was something I like a lot and was pretty good at. Giving or creating structure and rhythm out of a mass of material was very satisfying. Dunno what I would have done if writing hadn't become primary (see below)


I'm not sure I had much say in the matter. It was something necessary - essential, even.


Ron Silliman's The Age of Huts (compleat). I primarily read non-fiction (and primarily writing on cosmology), so I was very taken by Seth Lloyd's Programming the Universe: A Quantum Computer ScientistTakes on the Cosmos as well as Endless Universe: Beyond the Big Bang by Paul J. Steinhardt and Neil Turok, which lays out a new theory for a cyclic universe. I rarely see new films these days. I'm a big fan of old romantic comedies.


A book of poetry with the working title of "The Three Body Problem," and a bunch of essays on visual art.