Moez Surani, Are the Rivers in Your Poems Real


When poets write admiringly
of this life, this earth,

I sometimes think
they must have missed
these governments, these leaning institutions, the vectors of power.

And I think, Ah, they are writing a poem
that will go observation, elaboration,
turn a corner, and continue its passage
to a homily.

Canadian poet Moez Surani’s fourth full-length poetry title is Are the Rivers in Your Poems Real (Toronto ON: Book*hug, 2019), a poetry collection constructed as a suite of lyric meditations and criticisms on a wide range of political, social and cultural moments, movements and collisions. Surani speaks of globalism and its effects, and who we might, and even have, become. Through thirty extended poems that play with a variety of structures and styles, Surani writes on, around and through fading empires, rivers, western art, days he was in love, John and Yoko, multiple geographies, ballads, discoveries, visions, museums and cigarettes, and even a sequence titled “POEMS TO BE PERFORMED BY KEVIN / MCPHERSON ECKHOFF, WITH OR WITHOUT / A GREEN ELFIN MASK,” that includes:

He says, one by one, each of the words that he has avoided using in his published work. This catalogue of vulgarity is his notion of bad taste and defines his art. having employed each of these words aloud in a performance, he has committed artistic suicide, destroying that previous self and its division of good and bad taste. 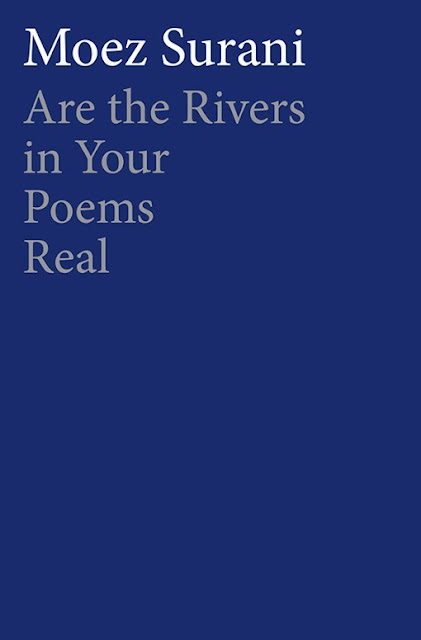 I like the expansiveness of these poems, each composed, in their individual ways, as poetic lectures, and his poems make me curious to see what Surani might be capable of through pieces that lean even further into lyric prose essays or lectures, as he writes, as part of the opening, title poem: “Then I am the river, and the stones and twists / are those I have loved, decisions I have made. // These categorical things are useless. Nothing is.” Published on the heels of his three prior collections—Reticent Bodies (Hamilton ON: Wolsak and Wynn, 2009), Floating Life (Wolsak and Wynn, 2012) and حملة Operación Opération Operation 行动 Oперация (Book*hug, 2016)—Are the Rivers in Your Poems Real is a book of thoughtful, serious play, one that carries a meditative weight but isn’t overwhelmed by it. As he writes in the second of the quintet of sections in “LULLABY FOR A WANING EMPIRE”:

Character is a waning thing.
I admire with age. And though
Temptations surround me, no tasty fling
is worth a thing I decide upon. Besides,
the events enhance us—birthdays, seasons, holiday meals—
if not for the calendar, I would be though
with time. It sweeps and clicks. I don’t
want to leave. Though my life, at times,
is quite plain. There are ideas
that interest me and dreams I have and songs
that seem to find me and, though stoic, breed their spirit
so thoroughly through my veins that with some sign of my body
I betray to others that all is not
fine with me. It must be
in the way I glance at things.

Posted by rob mclennan at 8:31 AM
Labels: BookThug, Moez Surani