This book is intentionally structured as a series of filaments. I cast a thought, leave it to begin another fray, and then return. And while I wove the fragments and photographs in a way that can be read linearly, I invite you to lift these poems in any order, consider the roving edge of a nest, and, then, weave them into concordance, into any arrangement that, for you, holds. (“NOTE TO READER”)

And so begins New England cross-genre artist and visual artist Danielle Vogel’s latest, Edges & Fray: On Language,Presence, and (Invisible) Animal Architectures (Middletown CT: Wesleyan University Press, 2020), a remarkable book-length essay-poem constructed as a collage of lyric fragments, filaments and photography. Vogel writes her poem as a study on and around the homes birds build for themselves, wrapping a two-thread narrative around the structures birds build against the ways in which language itself also builds both structures and space: “I begin to create these vessels // foraged for and pressed / into function /// a book , of string and filament   --   / / a vibrational object upon contact [.]” In a note to introduce her “BIRD RESOURCES” at the back of the collection, she writes:

I started researching how animals build with the hope that I might come to more fully understand my intentions as a “builder” of books. What are the responsibilities and motivations embedded in the acts of writing and publishing? What is a sustainable and embodied writing practice? After some years, I turned my attention entirely toward the birds. Their architectural instincts and intuitions seemed to most closely reflect how I wrote: as an architect of debris.
Writing this book has helped me to do the things I love most: slow down and revel in microcosms. Focusing my attention and care on the birds who live near me has been entirely altering and orienting. Maybe it will be for you too. 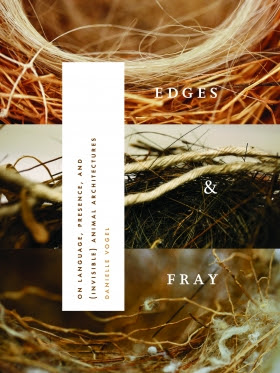 Vogel is the author of Between Grammars (Noemi Press, 2015), the artist book Narrative & Nest (Abecedarian, 2012) and the forthcoming The Way a Line Hallucinates its Own Linearity (Red Hen Press 2020); even her previous book titles suggest a combination of blended genres and “between-ness,” working a subject or idea from and through multiple structural directions simultaneously. I like her use of the word “filaments” in her opening, perhaps the most perfect word for how she puts books together; the word suggests an accumulation of multiple, small details, but something very physical as well, and her work is very much physical. There is something reminiscent of how American poet Susan Howe structures he own books in Vogel’s work, how Vogel composes a singular unit from multiple directions and structures: from the linearity of her poem-fragments and her longer prose-sections, as well as in the additional selection of photos, writing “that strange entangled expanse of one’s own interiority [.]”

This book began as I walked, as I stood. It began during a late autumn snow. On a rough tract of land as I watched over a pit kiln built of red earth and cow dung. Below the dung roof, small hand-built pots turned black and copper as they fired over the hours. As they fired, I stood thinking about my own form—its heritage, its present moment, how I had come to be there.