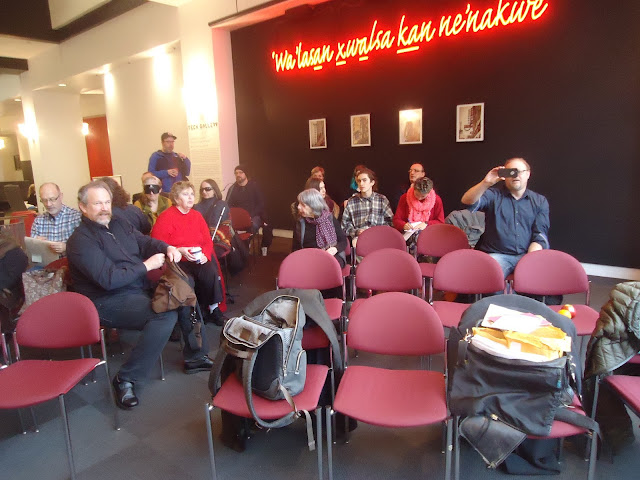 Last week, Stephen Brockwell (with recent Mansfield Press title in-hand) and I spent less than thirty hours in Vancouver for the sake of a reading as part of the Lunch Poems at SFU series, lovingly hosted by series co-curator, poet (and above/ground press author) Renée Sarojini Saklikar. On Wednesday morning, my alarm went off at 5:30am for a 7:15am flight, and we went directly from landing in Vancouver (10am local time) to our reading downtown. Madness! 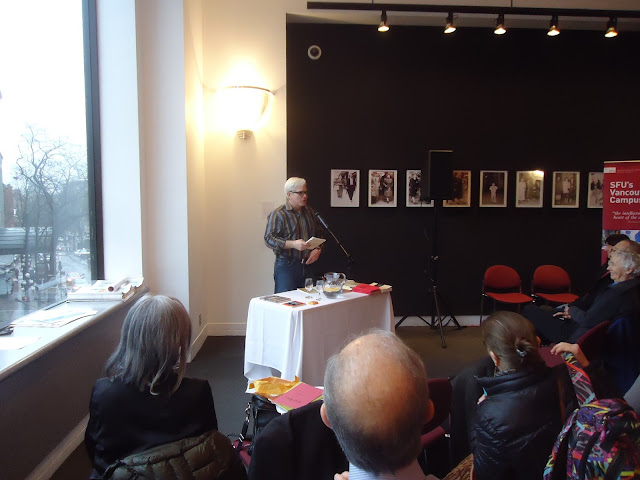 I was quite taken with both venue and crowd, and was finally able to meet lary bremner, a Vancouver poet and former Tsunami Editions editor/publisher (as well as above/ground press author) that has returned to Canada (after twenty-plus years in Japan) since I was last out west. Other luminaries at our reading included Renee Rodin, Fred Wah and Pauline Butling, Michael Barnholden, Nathaniel G. Moore, Carol Reid, Stephen Collis (who has a second above/ground press title announcing in March, following this one from last year), Kevin Spenst, Elee Kraljii Gardiner, Warren Fulton and Rolf Maurer. What an event! And we even sold books! And I gained a new above/ground press subscriber! It was nice to be able to launch my new poetry title, A perimeter (New Star) with editor/publisher Rolf in the crowd as well, so I could attempt to properly thank him. I read the entirety of the title poem, which apparently was recorded, so at some point you might even be able to hear the reading, as well as subsequent post-reading questions-and-answers. 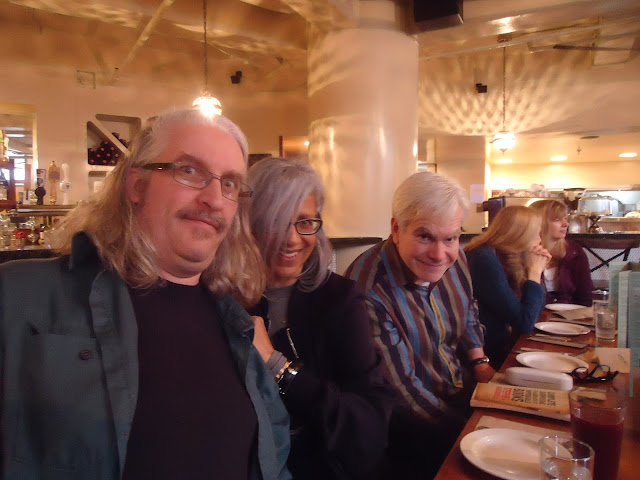 Renée was even good enough to take us for lunch, immediately following the reading. Apparently this is a tradition for their series. After that, Rolf and Renée insisted we be introduced to a bookstore that has opened since I've been in town, The Paper Hound (which I would highly recommend, for both new and used titles). I picked up a couple items, including Maggie Nelson's Bluets (Wave, 2009). 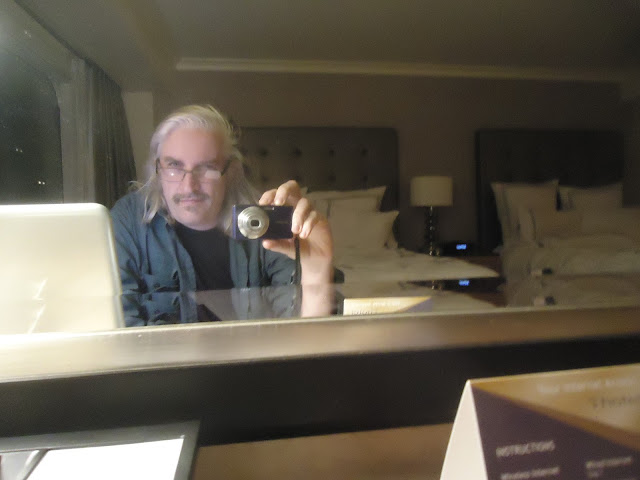 Given ours was a noon reading, and we were in town so briefly, we met up for drinks with a few folk later that evening. I attempted a later-afternoon nap, but just couldn't manage it, instead hanging quietly around the hotel room with notebook and books for a rare period of quiet reading and scribbling. [the photo might give a sense of the sleep-deprived haze I was in the midst of] Given the babies, that is quite a rarity these days. lary was incredibly generous in gifting us small handfuls of older publications, which we joyfully scooped up, including one of George Bowering's old Beaver Kosmos titles, Warren Tallman's THREE ESSAYS ON CREELEY (1973), something I've long wished to get my hands upon.

We couldn't believe: January, and there were people milling about in the outdoor pool of the hotel, directly below our window. Oh Vancouver, we enjoyed not having to wear all of our heavy gear and sweaters. But the rain. 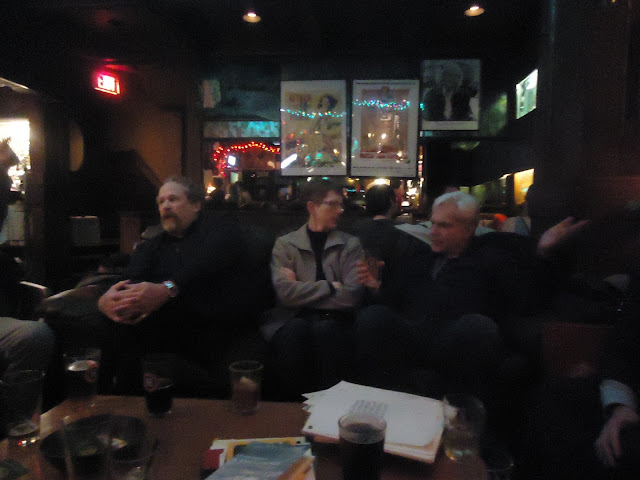 Meeting up for drinks, we were able to interact with Donato Mancini, Mercedes Eng (I was able to pick up a copy of the new edition of her book! note that she is giving away a pdf of the new edition on her website), Peter and Meredith Quartermain, Diane Tucker, lary bremner, Heather Haley and Rolf Maurer. A grand time! And, apparently Donato and Mercy both have forthcoming titles with Talonbooks? By the time Donato and I ended the evening and I made my way back to the hotel, I think I'd actually been twenty-three hours awake. 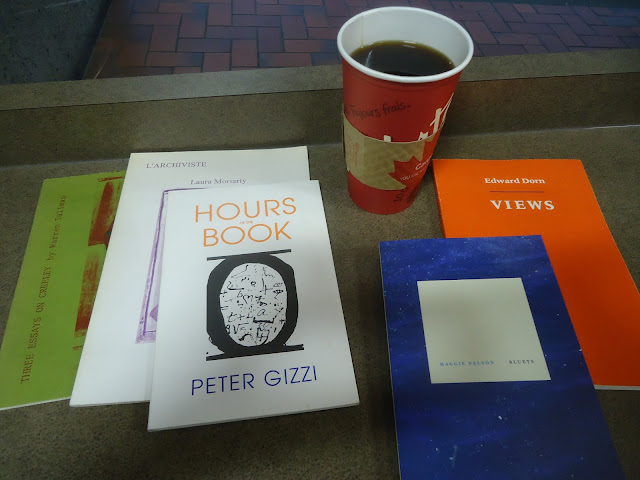 The following morning, Stephen had meetings, so I quietly made my way to Macleod Books after an hour or so scratching out poem-drafts amid breakfast and books and newspaper. And postcards sent home to the children. In the bookstore, I met a young staff person who recognized me, and offered regret at missing our event (I handed him chapbooks, naturally). I told him it could be another five years! 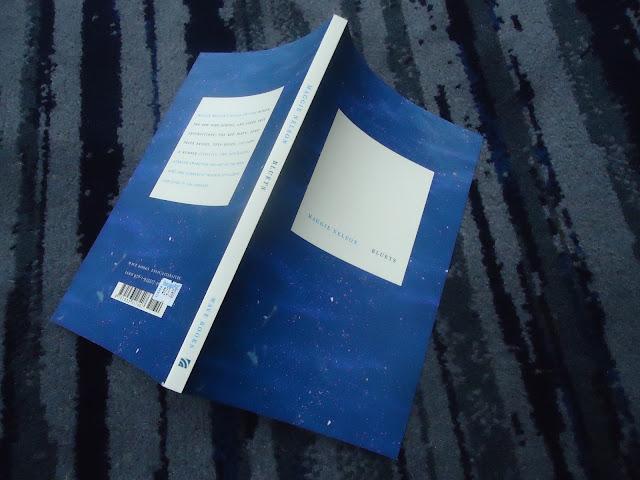 Awaiting Stephen post-meeting (given check-out was at noon), I spent some three hours in the hotel lobby reading Maggie Nelson (a book I'll discuss in a day or two). Oh, the glory of solitude and extended silence. Reading. 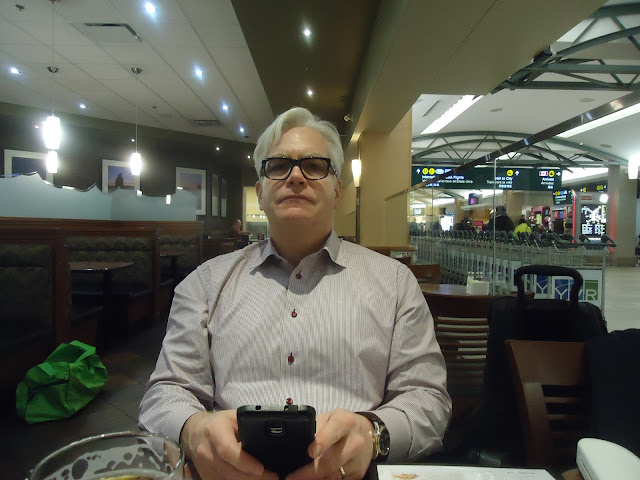 Before leaving the next day, we had a quick dinner at the airport, where I made Stephen pose with his best "Henry Rollins" look (he has a poem in his new collection referencing being mistaken for a variety of people, including Rollins). We were meant to fly out around 5:20pm (Vancouver time), but of course, we were delayed on the ground some forty minutes or so due to mechanical issues. Without checked bags, we went straight from landed airplane to cabs, and I was in bed by 3am, exhausted.