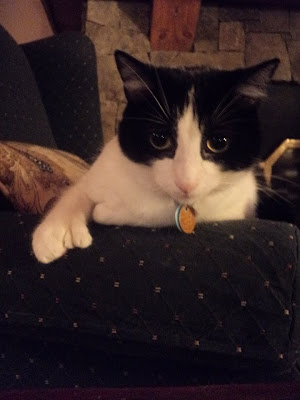 [Lemonade, lounging on a chair in Sainte-Adele, September 1, 2013] Have you seen the events coming up soon through The Factory Reading Series? HoaNguyen, Dale Smith and Mari-Lou Rowley read on September 21, and Kate Greenstreet, Paige Ackerson-Kiely and D. J. Dolack read in October 21, with the 19th anniversary edition of the ottawa small press book fair pre-reading on October 11 (readers tba), and the fair itself during the day on the 12th. Might we see you there?

And my report on the 20th anniversary above/ground press event is now online as well.

Fredericton NB: There is something that endures in the work of Fredericton poet, editor, publisher, radio host and visual artist Joe Blades, producing work now for a couple of decades. His newest chapbook, produced through the BS Poetry Society is CAUTION: paper (Fredericton NB: BS Poetry Society, 2013), a small collection of poems and artworks, a number of which have appeared previously as various mail-art projects, ads in New Muse of Contempt and other venues. The “Danger Be Alert!” (2007) warning, for example, that announces that “Every Season is Poet Mating Season” has appeared previously in a couple of places. There is an element of travel and transit to this small collection, with poems such as “roadkill tribute,” “forest? what forest?” and “capital” (on visiting Ottawa a few months ago) suggest an ongoing journal-keeping through the space of the poem, composing an ongoing lyric much in the same way Gerry Gilbert record-kept Vancouver through his decades of writing.

Calgary AB: I’ve been enjoying some of the small items that Paul William Zits has been producing through his 100 têtes Press, all produced very much in the vein of derek beaulieu’s work through the late, lamented housepress and current NO Press. The seventh 100 têtes Press item is the hand-sewn chapbook Silent Suite by Eugene Stickland (June, 2013), a small collection of poems on silence, printed with faded text. Between the strike-outs and the faded text, these poems are almost entirely built on a premise of erasure, taking away even before anything is presented.

You fall so far into silence some times
So deep it feels liquid
Like the temperature of darkness
Like the texture of the night
Like the taste of the stars
Like the smell of God.

Sometimes, thus
Up so falling
You land on the surface of the moon
And howl down on the un- and other-
Worldliness of the broken planet
You once called home.

And if you didn’t know before
Your silent scream reminds you
There is nothing left to say.

The ideas are somewhat interesting, but on the whole the poems aren’t strong enough to allow for the full force of what Stickland is attempting to present. I am hoping that this is simply the first in what will develop to be many more works by the author. On the other hand, I’ve become more and more intrigued by the works of Paul William Zits himself, from the chapbook of visual poems, Bullets (Calgary AB: 100 têtes Press, March 2013) and LEAP-SECONDS (Calgary AB: NO Press, May 2013). After going through his first trade collection recently [see my review of such here], and these two small items, I’m fascinated by Zits’ willingness to explore, experiment and stretch out his skills. The pieces in Bullets strike and fragment, quite literally, in the shape of a bullet that has been fired from a gun. The second small chapbook, on the other hand, LEAP-SECONDS, is a mass of text that very nearly overwhelms, opening almost immediately with both beginning and end before continuing on.

I am in one of the innumerable rooms, and the outstanding characteristic of these rooms is that the doors are always open, or nearly always. From, at least, this, I recall that at one time, work was done by collaboration, by exchange of ideas. Someone was once as likely to be working here at six in the morning as at midnight, if the spirit so moved him elsewhere. At times there would have been feverish physical activity, with experimental testees following schedules from one room to another as if they were trotting in a maze, calculating machines ticking away upstairs, and hidden cameras and microphones recording responses. However the spirit moves, and perhaps to facilitate this movement, the doors are always open, while the calculating machines tick away upstairs and the cameras and microphones recording responses are no longer hidden. The spirit moved them elsewhere. Experimental testees do not follow schedules nor move from room to room as if trotting in a maze. The spirit no longer moves them, or moves them about in places further than can be observed. The spirit moves the feverish physical activity in the calculating machines ticking away upstairs and the cameras and microphones recording, still, in places that can.