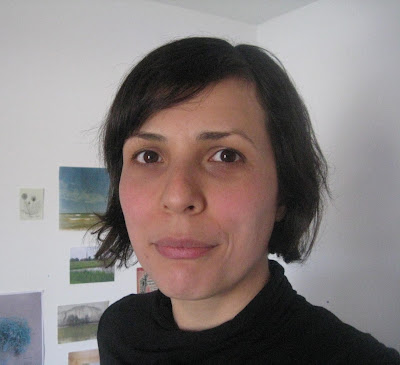 Sadiqa de Meijer's writing can be found in The Fiddlehead, Geist, Poetry Magazine, and other journals. Her poem "Night" appeared as an above/ground press broadside. A series of her poems won the CBC Poetry Prize in 2012. Her collection Leaving Howe Island appears this fall (Oolichan Books).

1 - How did your first book change your life? How does your most recent work compare to your previous? How does it feel different?
I'm not sure how it will change my life: it comes out in late September.

What I’ve tried for in recent work is clarity, lack of predictability, and also certain kinds of risk.

There’s an inclination I have – it’s like in that musical exercise when students are asked to ‘finish’ a melody or rhythm that the instructor starts – when I write, the words fall into line to meet a kind of aural expectation. Part of what I’ve wanted is to let that impulse be open to disruption. Phil Hall said to me that in jazz it’s called dirt – intended elements of dissonance. Probably what it takes first of all is a closer listening to the world.

The other kind of risk I’ve been interested in has to do with the speaker: risking the dignity or composure of the speaker.

2 - How did you come to poetry first, as opposed to, say, fiction or non-fiction?
I think it's the effect that poetry has on me as a reader.

3 - How long does it take to start any particular writing project? Does your writing initially come quickly, or is it a slow process? Do first drafts appear looking close to their final shape, or does your work come out of copious notes?
My first drafts do not much resemble the final poems. I write them in sketchbooks on large, unlined paper – I like the possibilities of writing between and around the initial text. Then I revise on the computer. And I work slowly.

4 - Where does a poem usually begin for you? Are you an author of short pieces that end up combining into a larger project, or are you working on a "book" from the very beginning?
Poems usually start with phrases for me – a few words that seem to have a force-field to them. Some overheard or read, others arising internally.

Leaving Howe Island wasn’t a book from the beginning – it’s an accumulation of poems from the last half-decade. But the first section of the book is a series united by subject – I’d written three or four poems and felt I could dwell on that material longer. At this stage I see internal resonances to the manuscript that I wasn't really aware of while working. I guess that’s inevitable when the writing is compiled.

5 - Are public readings part of or counter to your creative process? Are you the sort of writer who enjoys readings?
I do enjoy readings. They don’t factor into the writing process for me.

Or it makes me think of a figure like Harry Mulisch, the late and brilliant Dutch writer who would say amazing things like: “At a fairly early age, fifteen or sixteen, I knew for certain that I was a great genius. Only I didn’t yet know in what.”  He was conscious of creating a writerly persona – he even argued there was a cultural need for remythologization, after the holocaust and war.

As much as I like to listen to his interviews, I guess what I’m getting at is that being ‘the writer’ strikes me as a performance. Some people are really good at that. But it should be optional. The work should be enough.

8 - Do you find the process of working with an outside editor difficult or essential (or both)?
It's essential to me. I have the good luck of close editing relationships with a few writer friends.

9 - What is the best piece of advice you've heard (not necessarily given to you directly)?
It's tough to give advice a ranking, when the relevance depends so much on circumstance. Currently on the wall at my desk – it's not advice, but I feel it’s worth holding on to: Whatever is misanthropic is false (the French philosopher Alaine, in a letter to Simone Weil).

10 - What kind of writing routine do you tend to keep, or do you even have one? How does a typical day (for you) begin?
I schedule writing hours into my weeks – ideally daily – but the specifics shift all the time.

11 - When your writing gets stalled, where do you turn or return for (for lack of a better word) inspiration?
Sometimes it’s enough to pause and let some less striving part of the mind work it out. I tend to fill the gaps with domestic chores.

12 - What fragrance reminds you of home?
Cumin frying in garlic and ginger.

13 - David W. McFadden once said that books come from books, but are there any other forms that influence your work, whether nature, music, science or visual art?
Sure, all of those elements influence my work. To name a few of the influences on Leaving Howe Island: the work of artists Jamelie Hassan (http://www.gallery.ca/en/see/collections/artist.php?iartistid=2340) and Theo Jansen (www.strandbeest.com), a treatise on squid, Leonard Cohen’s Suzanne, and a newspaper report on plastic pellets washing up on Lake Huron beaches (http://www.theglobeandmail.com/technology/science/shores-of-lake-huron-awash-in-plastic-pellets/article1214900/).

There was one poem, a pantoum, that wasn’t working for a very long time. Then I saw the Jack Chambers exhibition at the AGO (http://www.ago.net/jack-chambers-light-spirit-time-place-and-life). Some of his paintings are of his family at home, and he was incredible at converying—and heightening—the sense of natural light in the room; I found that merger of light and domesticity very moving. I revised the poem with the spirit of those works in mind. Which I guess is also an alternate answer to question 11.

14 - What other writers or writings are important for your work, or simply your life outside of your work?
Maybe I’ll narrow it down to writers whose work surrounded me while I was writing Leaving Howe Island: Elizabeth Bishop, M. Vasalis, Allen Ginsberg, Ken Babstock, Paul Celan, Ida Gerhardt, Gwendolyn Brooks, Michael S. Harper, Anne-Marie Turza, Jason Heroux, Amanda Jernigan. I’m sure there were others, too.

15 - What would you like to do that you haven't yet done?
Visit Cracow, and Istanbul, and Newfoundland.

16 - If you could pick any other occupation to attempt, what would it be? Or, alternately, what do you think you would have ended up doing had you not been a writer?
I probably would have been a doctor: I studied medicine before changing my mind.

17 - What made you write, as opposed to doing something else?
Writing gives me a particular kind of experience that nothing else does: I don’t love it in the sense that it’s predictably enjoyable, but I do love it.

Like most writers, though, I’m generally doing something else as well.

19 - What are you currently working on?
Some early drafts of poems, a series of short essays on the experience of learning English from Dutch as a child, and a novel.