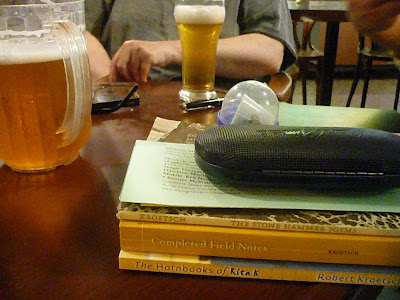 It was awful to turn on the computer to the news yesterday that Alberta writer Robert Kroetsch had died in a car accident on Tuesday night, returning home to Leduc from a reading, mere days before his 84th birthday.
A mentor and friend to more than a few generations of Canadian writers, Kroetsch's influence was wide-reaching, not only through his writing, but through the generous attention he consistently paid to younger writers, a generosity he seemingly extended to almost every writer he met.
I first met him through Winnipeg poet and editor Dennis Cooley, during those Friday afternoon gatherings among writers and thoughtful readers at Boston Pizza, sometime during the last century. Boston Pizza, of all places, just down the Pembina Highway, not far from the University. Quiet Bob, sitting at the corner of the table, taking all of it in, commenting when required.
Later, as I toured through Winnipeg, reading with Laurie Fuhr, Kroetsch coming out to be part of our small audience. Robert Kroetsch came to hear us, I beamed. Who's that? Fuhr's blush in a subsequent email, discovering library shelves of his name.
Over the years, we would see each other in Winnipeg, and even Ottawa a couple of times, whether for a reading he was doing as part of the ottawa international writers festival, or later, when he returned for the postmodernism conference at the University of Ottawa. His reading as part of the conference had not one but two standing ovations: one before, and one after. He was there to be loved, and looked slightly embarrassed.
Sitting between Robert Kroetsch and Dennis Cooley, the admirers that slipped Kroetsch a pint or two he'd quietly slip over to me. A nod, and a smile.
His was a constant influence. In poetry, fiction and non-fiction, he worked in genres carved out for himself, that he'd managed to create, so the rest of us could explore the same, in our own works. A novelist who came into poetry, showing us just how it could be done.
In his decades of publishing, specifically poetry, he managed to remain active, and fresh, well beyond many of his contemporaries. He enjoyed, and engaged, wholeheartedly. With his whole heart. He was always asking for names of young writers that he should be reading.
It seemed he was constantly publishing, whether the occasional book, or odd little missives he somehow kept quiet about, until one would appear in your mailbox. Even now, he has a chapbook forthcoming with Jason Dewinetz's Greenboathouse, and another, through my own above/ground press, the small chapbook Further to Our Conversation, that includes:

Dear John Lent,
We wash ashore from our mothers wearing nothing but a few hairs. Our first cry is a poem that contains everything.
Strictly speaking, peanuts are not nuts. It was a wet night, so you rowed home. I suppose you could claim we have learned to walk without legs. That would be the short answer. Never mention the moon in a poem, that’s what I always say.
Cantilevers can cross a chasm from cliff to cliff. The converse is also correct. The Beowulf poet was onto something. Figs and apricots, set in the sun, could be said to be soaking in sunlight. Given that, then, the thought becomes a thong.
On bad days we are little more than road kill.
You were riding shotgun on your motor home when the thunder rolled. Coconut cream pie is just about the best thing going. If I had my way, giraffes would have shorter necks and longer legs, errant snakes would be hanged by the neck, Dewey Decimal would organize our highways once and for all.
You knelt too close to the fire. You might be a ruse, a reconnoitering. Icarus in a car, disguise the limits, pain.
Capitalists and other high rollers wear expensive shoes. Certainties are short-lived, and fallacies are, by and large, true, or somewhat true, or briefly true, or not untrue, with exceptions as noted. Poets might not have wings, but they have toenails. Your poems are catapults. Please unfasten your seat belts now.
A license plate has an odd destiny. It is not allowed to make words out of the ABCs.

There are probably, possibly others. There are hopefully others, including the book-length version of what I wrote about online at the Globe & Mail, possibly including this other as well.
During my Edmonton year, rereading a number of his books, including Alberta (1968), including A Likely Story: The Writing Life (1995), including The Crow Journals (1980). I reread The Studhorse Man (1967) and looked over that bridge, the High Level Bridge. During my Edmonton year, told by Cathie Crooks and Jeff Carpenter of the University of Alberta Press that I'd become “friend of the press,” meaning any books they'd published I could purchase at author discounts. I immediately picked up a few extras of The Completed Field Notes (2000), to hand out to others. Another copy, to keep my other copies from wearing down, completely. Repeated sessions of weeks, even months, I would carry around, dipping in.
Whole projects of mine over the years hold an echo of Robert Kroetsch, somewhere. A trace of a lemon, or the inevitable delay, delay, delay, the tantric hold of the long poem. The length of the line, or a sweet and lusty tribute to a beautiful woman, all the way back to beginnings. 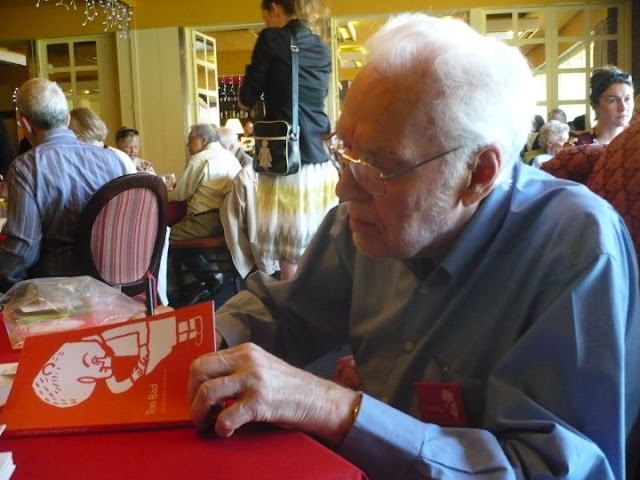 Last spring in Edmonton, I was fortunate enough to be part of a trio of authors launching books published by the University of Alberta Press – myself, Alice Major and Robert Kroetsch [the photo comes from such, Kroetsch signing my copy of his newest, Too Bad]. In the two readings we did, able to watch a crowd show up to admire the man and his work, from George Bowering, Kimmy Beach and Lori Neilsen Glenn in Edmonton, to Aritha Van Herk, Nathan Dueck and Dennis Cooley in Calgary.
From the podium at the University of Alberta's Faculty Club, mentioning the woman he had to break a date with in 1948, just after his final year of university. Breaking their date to head north to learn, as he'd said many times, to become a writer. The woman there in the audience, the first time they'd seen each other since he'd broken the date, and his sly suggestion, perhaps, that he should make up for the loss.
And here too, we, wishing we could make up for such loss.
Those long threads of prairie roads that created him, and the last that he knew.
Last night, a small group of writers converged at the Carleton Tavern in tribute to Kroetsch, each lifting a glass.
Here, a new poem (draft) as tribute to Robert Kroetsch, taken far too soon.

Dear Robert Kroetsch,
Like one speaks to the stone, like
you,
-- Paul Celan, Selections (trans. Pierre Joris)
The afterward constantly updates. Our stories have yet to begin.
Your home took you everywhere. So far, in fact, you had even returned. Home, addressing the mouth, and the eye.
Leduc, to your sister. There was always that part that remained, that had never taught Birmingham, never fathered, never taught Winnipeg, never retired. Had never walked beaches in New Zealand, or flown snowbird across the South Seas.
We revisit our own pasts to meet up with ourselves. We call this the future. We call the emptiness, wisdom.
I am heartbroken, sad. The words, before they even begin.
In Alberta, before you'd gone north, you grew into the name that was yours. We rewrite ourselves constantly.
Through your poems, you constantly warned me. Of what, neither of us were entirely sure. Perhaps you kept writing to learn, what you'd already discovered.
Steep your hands in the cosmos. Kroetsch, what can I tell you. Advice I would never presume. We get stuck on the word.
Your poems composed as conversations I didn't realize we'd had, immediately familiar once reading.
The day that I heard, raising a tavern-glass. Looking west, for the near future, and the most recent past. Why do we expect our teachers to never die.
Your handwritten updates. Your story has yet to begin.

Thank you for writing and posting this, Rob. Very moving, and goes right to the heart, the bone, the known and the unknown.

Hello rob, allison calvern, in Thunder Bay at the moment. Thank you for your lovely tribute to Robert Kroetsch. Thank you.

A wonderful tribute to one of my favourite poets. Thanks for doing this.

Thanks for posting this Rob. What a beautiful tribute. He was such an important early influence. My Frankfurt flughafenn after his hautbahnhof...

Thanks, Rob. Kroetsch wrote so well. Poetry, novels, and criticism/poetics. And he was such a beautiful soul.

:: Many thanks. A belated introduction to someone whose I'd never encountered.