VOICE
When I was a bumptious (creative) writing student and part way through the year, I suddenly got a great mark on an assignment, after a line of so-so okay grades. My (creative) writing professor wrote on my last page that I had at last found my voice. It was a story that included in its cast of characters, or its images, a one-legged seagull at Stanley Park, and I was pretty pleased with it at the same time myself, slow learner as I was. I never published this story, though I did get around to publishing some of my “creative” writing assignments, even a play that got anthologized and produced on stage and television. For a few years early in my “career,” I taught “creative” writing part time, but I never said anything about young writers finding their voices. I have heard, though, that that’s what they say in “creative” writing classes. Does this mean that you lose your voice, maybe because of your education, and then you go looking for it? Or does it mean that your voice is hiding from you, or waiting for you out there, like Mr. Right, and you have to try a lot of voices until you get the one that is meant for you. Voice, you see, is an easy thing to mention, and a hard thing to define or describe. It is something you just “hear” and “know.” People who never heard Donald Barthelme talk will tell you that they recognize his voice when they read it. I don’t know – when youngsters ask my advice, or seem to, I tell them to shut up about their voice, and open their ears, find out whether the language they are hearing at the moment has anything to say to them. 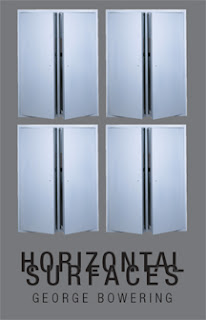 Vancouver writer George Bowering’s collection of short essays on writing, Horizontal Surfaces (Toronto ON: BookThug, 2010), can be considered alongside previous of his prose-explorations, short essays on writing and writers, collected alphabetically in small collections, including Craft Slices(Ottawa ON: Oberon Press, 1985) and Errata (Red Deer AB: Red Deer College Press, 1988), both worthy, compelling and highly entertaining works a number of current readers would love to get their hands on, if they only knew (apparently a scheme to reissue these works has been in the works for some time). Horizontal Surfaces, much like many of his other works of poetry, fiction, history and literary criticism, contains references to jazz, William Carlos Williams, poetry, Robert Kroetsch, Montreal, Laurence, baseball and Vancouver, and perhaps even a passing reference to that old newsletter, Tish, but there’s always some new element he manages to bring in, some new lesson to impart, if you’re paying attention. These pieces are much too sly to give anything away too easily. For years, George Bowering has been writing these short books on composition and perhaps more readers and writers aught to be engaging with them; why aren’t his writings on writing better known, wider read? Just as worthy as anything else by any of the “famous” writers that other countries seem to produce, the writers and thinkers from outside these geographic lines.
Posted by rob mclennan at 12:53 PM
Labels: BookThug, George Bowering