Said to be the third-longest-running-continuing reading series in the country (after Harbourfront in Toronto and The Yellow Door in Montreal), The TREE Reading Series happens twice a month at the Royal Oak on Laurier Avenue East (at the University of Ottawa) at 8pm on the second and fourth Tuesday of every month with an open set and featured reader. Constantly evolving, the current directors, Rhonda Douglas [see my note on her here; see Amanda Earl's note on Rhonda's recent reading with Kate Greenstreet] and Dean Steadman are moving the series from the basement of the Royal Oak II to the Ottawa Public Library an hour earlier. Upcoming readers include poets Suzanne Buffam, Max Middle, Sue Elmslie and Monty Reid, and an evening of up-and-coming Ottawa writers; you can find out more about their current and upcoming readers here.

At the reading series' twenty-fifth anniversary, outgoing directors James Moran and Jennifer Mulligan even edited a celebratory anthology, Twenty-Five Years of Tree (Ottawa ON: BuschekBooks, 2005), highlighting some past readers, and giving a listing of all events over the years (I even ran the series for a while, from June 1994 to January 1999). 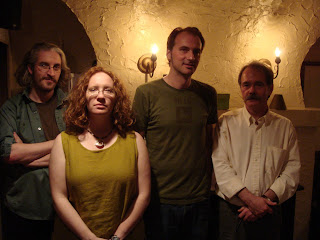