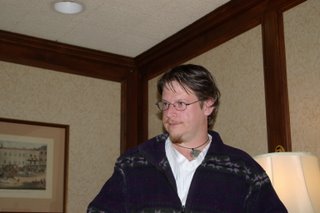 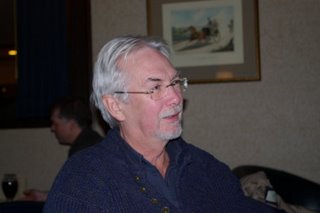 Tour notes, day one; November 1, Ottawa ON to Vancouver to Prince George BC

In the Vancouver Airport checking email and trying all the soups in the lounge; the benefits of traveling with Stephen, to be bumped up to first class every so often (as we were for England in August/September, and Ireland in 2003). I ate as much as I could in the two hours between arriving and our next flight north to Prince George; three kinds of soup (two of one kind), and four salads (they were all on these tinytiny plates). Had two cans (ahhhh) of Guinness and Stephen told me to be careful. I am always careful. Checked way too much of my email and posted some blog items. Why always with the blog items?

Reading tours are always where I allow myself the luxury of reading fiction; time I never think I have as much at home. On this trip, reading prose and working to write it as well, with four books of fiction in my bag, starting and finishing Toronto writer Alayna Munce’s When I Was Young & In My Prime (Madeira Park BC: Nightwood Editions, 2005) in a single day while in the air. A magnificent novel. I could never say enough good about it (although I am working on it, currently). A month is a long time do be doing any kind of travel, so I plan to eventually move from fiction to non-fiction in both reading and work. I’ve been wanting to work a longer short story on Buffalo Bill for some time now, as some sort of counterpart to the long poem the true eventual story of buffalo bill that I wrote a few years back, pilfering much of the same information (it’s currently sitting on my desk in a pile of other manuscripts, lingering unpublished… but who am I to complain…). I have a few pages of notes so far, but another line has fallen into my notebook as well; I wonder if this could be another story, moving along the lines of “Bones.” Since I wrote my “escape notes: london” in August/September, I’ve been aware of working an eventual manuscript of perhaps five or six longer short stories (or shorter novels, since my “long” novels are only about 100 pages anyway). Could this be the time?

Brockwell, as usual, has his stacks of reading material, reading Emerson on the plane from Vancouver to Prince George (I made the expected Lake and Palmer jokes, of course; he was too far behind me on the previous flight to know anything of what he was doing). In the hotel later on, while waiting for McKinnon to call, he read me this quote from "The Poet" (from The Portable Emerson, new edition, edited by Carl Bode in collaboration with Malcolm Cowley):

The condition of true naming, on the poet's part, is his resigning himself to
the divine aura which breathes through forms, and accompanying that.

Last night drinks with Rob Budde and Barry McKinnon (see photos above); was supposed to with Ken Belford as well, but he didn’t make it. Budde and Barry have to be two of the nicest folk I’ve met, talking about whatever it is that us writers do, them writers, Budde and his four hundred children that made him later to the hotel lounge. We meant to meet in the lounge and go further, but didn’t quite end up that way. Some photos Brockwell took, and the notes that made it into my head. Got some little publications from Barry; will his in the millennium book ever appear? Reading in an hour or so at the university, and then an afternoon of whatever else with Belford and Barry, dinner later somewhere else. This university knows how to take care of writers, paying for hotel and reading fee and the occasional food; what the? I gave Budde books and he still insisted on buying others, including the new one from Monty Reid. Oh, these people with jobs. Had an expensive breakfast thismorning around 8am downstairs and tinkered a bit, reading and taking notes.

from “the other side of the world”


a world of where two rivers; thompson, fraser

where heart is part & parcel

where north is north is passage singing rogers & not

to be fucked with

where is not international waters

he says, you can’t run a business


The reading at the University of Northern British Columbia, hosted by poet and professor Rob Budde went quite well (although what’s the deal with the bear in the front painted up like Spider-Man? Where was the Green Goblin bear, or the Doctor Octopus bear? Oh, why didn’t we get a photograph…. ); to a packed house, Stephen Brockwell and I read about twenty minutes each, and answered a flurry of questions from both audience and host (Brockwell did record the reading digitally, if anyone is interested). We did our usual dog-and-pony show, what Brockwell calls our “Abbott & Costello routine” (I prefer Wayne & Shuster, keep to Canadiana; to hell with anyone who doesn’t get the reference). What I find interesting is that we’ve been performing together long enough and in enough places that we do actually have a little routine going, knowing what I can get away with (heh heh), and learning how to compliment each other’s considerations, since our work doesn’t really have that much overlap, especially when we’re answering questions. I think it’s good for a group of students, as well, to see how our stylistic contradictions don’t have to become competitions; that just because we do different kinds of things and have different purposes and interests doesn’t mean we have to have idiot pissing matches. It was one of the founding principles of Poetics.ca, that our considerations do have these divergent directions, which hopefully makes the site as a whole less about our individual interests and more about those places where we might even contradict (but sometimes meet). During his reading, Stephen repeated our constant joke that I make fun of him for refusing to read the living, and his that I refuse to read the dead; I tossed a comment from the back of the room that I looked forward to reading his work...

Audience members included Barry McKinnon, Ken Belford, Si Transken, Gillian Wigmore and Laisha Rosnau; the last time I saw Laisha, a few years ago, she was back and forth from Vancouver to Victoria (I had originally met her in Vernon, British Columbia in 2001 when Andy Weaver and I drove from Edmonton to read for Jason Dewinetz’s Greenboathouse Books reading series). I had no idea she was here; apparently she and her husband moved to Prince George last year (husband; is it appropriate to admit that I used to have a massive crush on her?). And after how much I enjoyed and admired her first novel, when will the next one appear?

Wigmore introduced herself and gave me a small package to pass on to Ariel Gordon in Winnipeg (and I won’t tell Gordon what it is, either, just to bug her). Apparently Wigmore is envious, and would love to be at this reading we’re doing there (but wouldn’t give me sufficient reason as to why she can’t just come along…). Budde was even nice enough to take us to lunch afterwards, and gave me copies of a couple of things, including richard krueger’s chapbook [t]h[e [f]oldin[g s]easo[n] (Prince George BC: noScene(press), 2002), Michael Armstrong’s play In Their Nightgowns, Dancing (Prince George BC: UNBC Press, 2005), and Four Realities: Poets of Northern B.C. (Prince George BC: The Caitlin Press, 1992), edited by Don Precosky (who also did It’s Still Winter, something I think he should do more of) and featuring the work of Ken Belford, Barry McKinnon, Barbara Munk and George Stanley (who has long since moved to Vancouver). I’ve actually been wanting a copy of this for some time, so very much appreciate that he had one (with a 99cent sticker on the back cover). McKinnon is one of my favourite Canadian poets (I’m disappointed that he had to leave after the reading to head back to his other house in Tumbler Ridge), and he was saying that his magnificent collected/selected The Centre: Poems 1970-2000 (Vancouver BC: Talonbooks, 2004) had only one review (the one I did in The Antigonish Review; I at least did a longer essay, but it hasn’t appeared anywhere yet, and might not, until it appears next fall in my ECW Press collection of essays). Here is one of his poems from the anthology (originally in his Governor General’s Award nominated Coach House Press title, The the.) that was later included in his Talonbook.

Claire has 4 teeth
& can stand

high enough to turn
the radio off

& throw my baby picture
off the shelf

what questions can I
ask

about these things
I watch my girl

grow. I am grown up
& must bend down

to turn the radio on
& put my picture back (Barry McKinnon)

Ken Belford is interesting; after a break of years, he had books out in the late 1960s, and then a couple more over the past couple of years. Budde calls him an “eco-poet,” suggesting that no-one really knows where to put Belford’s writing. During lunch, he referred to himself as a “Mountain poet,” comparing himself to Peter Christenson and Sid Marty; where does one put someone who writes poetry about places that don’t usually have or get the poetry? It reminds me of a Frank O’Hara quote about schools, how they’re predominantly useful for being remembered at all; individuals are too often lost, after the years go by. Do you remember the poets that existed in New York that weren’t in the New York School but at the same time? Do you remember the Vancouver poets the same time as Tish that were included but not included? (See also: Newlove, Kiyooka, Copithorne, Gilbert, etcetera…)

Waiting soon on Budde to call for dinner plans that will hopefully include some of the writers that weren’t around for the 11:30am reading (what the hell?), and some other event tonight that Brockwell brought his 90 year old classical acoustic guitar for...
Posted by rob mclennan at 1:03 AM