On her seesaw, a kerchiefed woman comes out
into dry air, clean light, high swan-white strips,
while inside he waits for the cat gut
to swell, for drizzle or a downpour to gallop
over windbreak and field, lowering cast
to the cloud pile, slugs blooming on the cowpath
like fungus. Traps and blades could up and rust.
From her separate door she’ll re-emerge with
blue breaking through grey. Another thin day,
another spell of keeping her balsa-wood
twin in his unlit room playing skunk or solitaire,
losing weight by not drinking. Dry he could
be a manageable dream she keeps in a hand-tooled
box. She, the law that regulates his mood. 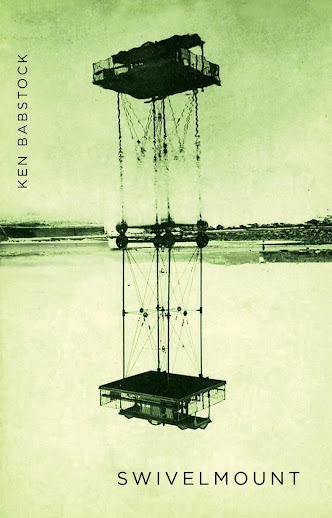 In Swivelmount (Toronto ON: Coach House Books, 2020), Toronto poet and editor Ken Babstock’s first poetry title since his Griffin Prize-winning Methodist Hatchet (Anansi, 2011) and subsequent On Malice (Coach House Books, 2014), his poems don’t as much describe as disassemble, pull apart piece by piece so as to set aside and open the lengthy process of meditative study. Babstock’s poems are restless, moving through elements of history, biology, geology, sports and art, wandering along the Scarborough Bluffs or Leslie Street Spit, musings on a hockey game, or an unexpected comparison between punk and classical music. In his particular blend of intellectual inquiry and study against hard truths or brutal consequences, Babstock explores the elements upon which we may have, or even decide we have, little or no control. “Buffalo south over the marbling lake seen / pitching an errant new mall.” he writes, to open the poem “Milk and Hair,” “Clear mornings // I’m meant to be comfortable with the American / vernacular, it was meant to happen between channels. // Stop pretending you can just up and start thinking— / it’s mostly snooker, sardines over ham, the sense / of having pointed to Door Number 3 / at the business end of some steamy // ruminations.” Babstock writes on the human capacity for beauty and violence, two sides that don’t reconcile easily. “Consider / the atom;” he writes, to end the poem “Edge,” “if there’s a way / of breaking down / a thing we’ll find / a way to break it.”

His language is incredibly dense, but there’s a curious meander that Babstock has in his diction, that somehow exactly gets to the point, such as in the poem “Dream of the Cerne Abbas Giant,” as the narrator writes on his reluctant son: “He // wanted, he said, to not be the age that he / in fact was, wanted / to no longer be // even the he that he was and couldn’t not be, / inexplicably snagged in the cross- / currents of now and here.” His language is precise, but capable of a lightness, of a dexterity, that refuses to be weighed down. There is a particular kind of precision that Babstock does brilliantly, managing the complexity of straightforward possibilities.

I remember attending a reading Babstock did at Concordia in November 2001, and being quite taken with how quietly and deeply articulate he was, answering questions posed to him by students and faculty alike. Whereas a part of me might wish Babstock wrote critical prose—a sequence of essays, for example, on writing and thinking (comparable, I would suspect, to essays by Don McKay or Robert Bringhurst)—one could argue that everything he might have included in such a volume is already there in his poems. As the closing of the poem “Die Zwitscher-Maschine” offers:

Which of us now
inhales the city

as though mock
orange were in bloom.

My burner, my
balaclava. What a

notion, honestly,
what a notion