Back to School : a stay-at-home story,

We’re in the midst of back-to-school, although a far different one than we’d been expecting. On Friday, both our young ladies sat at laptops for 9am zoom sessions of e-learning. Aoife began junior kindergarten, and Rose started grade two. (Oh, but wasn’t this the year Aoife was going to start school full-time, thus returning my days to writing after all these years home with the wee children? Oh, yes, no. We aren’t talking about that.)

Given Christine is high risk, utilizing our sunroom as her refurbished home office (a corner office by the window, I’ll have you know), and I’m home either way, we are keeping our young ladies home from school. (with the hopes that, minimum, next September will include a return to normal schooling). I also think they’re too young to have to worry about masks and distancing and the potential stress of such an environment (we know folk with older kids, and that just feels different). I know we’re lucky to even have the option to keep them home, as this isn’t possible for so many other families, even if they wished to do so. With Christine’s health as a factor (last year’s meningitis and stroke and her ongoing asthma, but mostly her now-underlying heart condition that may even be an issue of a compromised immune system), it really doesn’t seem worth it to do anything else. Also, we are soon-bubbling with mother-in-law, and her age is a factor as well (we don’t talk about that, either). And if the e-learning becomes too problematic, we’re prepared to pull them out entirely and homeschool them, but we’re going to see how this e-learning stuff goes, first (and homeschooling wouldn't be nearly as effective for the French Immersion elements). So far, it does actually seem to be going well, despite all the last-minute updates and teachers scrambling (all of which I’m willing to blame on the province for not bothering to roll out any sort of proper, actual plan until well into August). 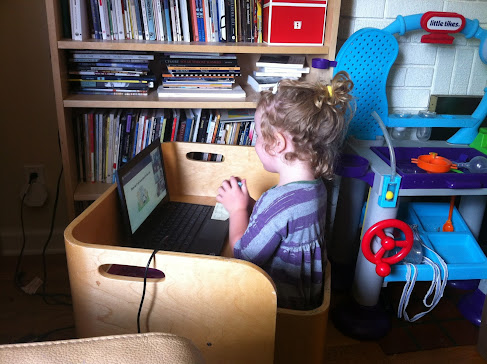 Aoife on a laptop in our living room, and Rose a few feet away on another laptop in our dining room. It also means I’m not in my office working, but at the kitchen peninsula (not an island, as it connects to the wall), listening in for whatever they might need (I addressed and packaged an above/ground press mailing during today’s schooling sessions). Rose needed to figure out a screen, or Aoife not knowing how to unmute herself. At one point Aoife accidentally left her meeting. Rose continually pushed buttons that knocked her into another tab, thus losing her visual.

They’re doing daily three-hour sessions, which will be broken up, allowing for lunch time and free play. Aoife’s is broken up a bit more than Rose’s, but they were engaged and responding far better than I might have suspected. Aoife requests a turn directing the class in "Simon dit" (French class' "Simon says," obviously) and giggles at how the whole class responds to her requests. "Simon says twirl!" she says, and she laughs at them twirling. What a great word! her teachers say. She never gets around to telling them to stop (perhaps this is deliberate). Aoife is freed for an hour and wanders off to their room, happily playing, as Rose continues her class. Rose is freed for lunch, and immediately wants to run outside to the swingset we had put in the yard last week. 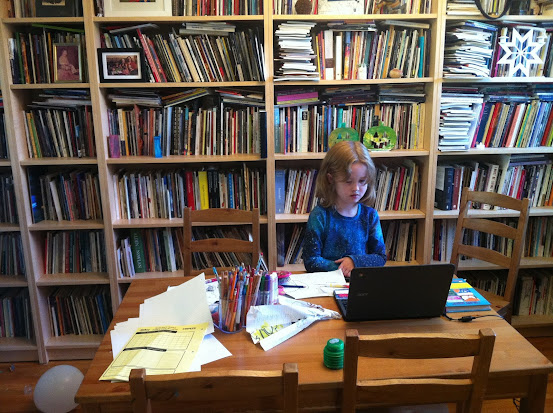 Perhaps six months in the house means they’re more open to this sort of thing, despite whatever clunks or hiccups might occur. I couldn’t figure out a link at one point, or who to what with the whoosis. I had to call Christine for technical assistance at least once.


At least from how the first day went, I was quite impressed with all the teachers, and their ability to keep their attentions. The classes don’t appear to be overly large, which most likely helps. We shall see what develops once homework assignments are thrown into the mix.

For this first day of e-schooling, Christine doing a rare day at her lab, solo (once or twice a week, I think). Her building is otherwise empty, as everyone is home. A schedule for her lab-mates where they each take turns, attending and working empty-building days, doing those bits of work they can’t actually do from their living rooms or apartments. Over here, I am between machines, whether theirs or mine, answering why this won’t work and where did everyone go and then off to check in on my own emails. Clearly, I will have to learn how to work differently, around this. Perhaps further time working and writing at our kitchen peninsula.

Rose and Aoife are getting at least some small elements of physical socializing. Christine signed them up for forest school: every Tuesday afternoon the two of them will be off in the bush in Blackburn Hamlet with a small handful of other children, something they began last week (thus the official ‘first day of school’ photo from our front step). They’ll be outside the whole time, and of course, we will see how this goes. Every Tuesday for the next three months. Presuming it goes well (they’re in the same group, as this is Aoife’s first time; Rose attended these all through both years of kindergarten), in the New Year, when the next session begins, Rose might switch to a weekly full-day class, and Aoife in another half-day. They will learn about leaves and bugs and look at frogs and all sorts of things. Rose absolutely loves it, and it seemed safe enough, we thought. For now.

Might this be a long winter, despite all of this? Oh, my. Yes. I would say so. Yes.