To the Un World

I would a stargazer,
would a bison-memory be
fringe of spindles on clear-cut ridge
cross river recross
back slip back sneak
unthread Canadia 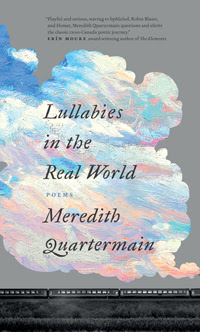 Vancouver poet, editor and publisher Meredith Quartermain’s latest is the poetry title Lullabies in the Real World (Edmonton AB: NeWest Press, 2020), a collection that “reflects and refracts Canada from diverse angles, and challenges colonizing literatures such as the Odyssey and various canonical British and US voices. As it moves from west to east, the book journeys back in time to interrogate historical events such as the Battle of the Plains of Abraham and the exclusion of the Acadians. It ends by imagining a time before or outside colonization.” On the surface, that description reads as highly ambitious, working to articulate and interrogate a variety of historical social and political upheavals and connecting those upheavals to the shape of the contemporary landscape. Quartermain is the author of numerous poetry books and chapbooks over the past twenty years, including Spatial Relations (Diaeresis, 2001), A Thousand Mornings (Nomados, 2002), The Eye-Shift of Surface (Greenboathouse Books, 2003), Vancouver Walking (NeWest Press, 2005), Matter (BookThug, 2008), Nightmarker (NeWest Press, 2008) and Recipes from the Red Planet (BookThug, 2010), and a number of threads have emerged from her work, including an engagement with the prose line, a lyric of strolling and observing (akin to Beaudelaire’s flâneur), and an engagement with a broad range of considerations around her “local.” For her Lullabies in the Real World, Quartermain broadens her scope across a great physical and historical distance, writing across the length of west to east—the Siege of Quebec and the Plains of Abraham, Louis Riel, Cabot’s Trail, crossing the Rocky Mountains, the Red River Rebellion, the Group of Seven and multiple other points, references, individuals and moments—as a sequence of jumping off points, writing slant on state violence and racist policies and actions, asking how one could ever expect calm to emerge from such fury, and peace to emerge from punching down. “the weather hazy,” she writes, to end the poem “Captain Montrésor with General Wolfe on the River,” “wind fresh / the weather clear, wind foul, tide-flood making / the weather foggy / the weather clear [.]”

There’s an enormous amount of play in her language, reveling in a collage of sound, meaning and reference, such as the opening poem, “Unreal to real,” that writes: “Buy low. Sky blue. Who’s it? Not you, / lift the latch crosspatch / of Prufrock’s Xanadu / Xanada Canadu. / Wheel your red barrow / in Blake’s cathedral / bpNichol St Rains St Ruggles.” Through poems set in six sections, Quartermain writes to bpNichol, imagines marching up the Saint John River, and writes of Saskatchewan grain elevators. Quartermain writes of an array of diverse voices, activities and actions set aside by the thin lines of acknowledged history that her poems work to claim, re-claim and set back into conversation, collecting them together into a book-length collaged portrait of a landscape both real and imagined, official and unacknowledged. And, as the final poem in the collection, “Standing on Cabot’s Trail,” ends:

I wish this wish were not clumsy, vain
lurched blindnesses called words

I wish it were music by Coltrane or Shostakovich
I wish it could counterpoint all at once every language
of every planet, animal, bacteria, mineral and molecule
and somehow pour out like a milky way
from this upsidedown canoe of a beak
these diamond eyes rowling in my head
this tumbleweed tail
these usless wingstubs

you would hear it
you would put down your guns