dysgraphia by the imprint the link the image displayed through nothing here
| the kinds of given names | the coming away unmarked | the wonder at this
edge if it is I’s edge | at this head if it is I’s head-full of a disappearing act |
assembled cautiously in I as those children of today | as the mouth turning out
the speed of sound-now | in this 6: 21 am breeze with someone
maybe you still alive with familiar irresistible mystery where I choreographs | the
manoeuvre of to-come and give-way | where the world is full of reasons to push
the back seat down and set a life-force soaring back to its ragged world | to the
ones preoccupied with the ragged that is I | the ragged that implores the ragged
that turns all narcotic and detour | that a thing can name what
it survives in the in and gives hell on the way out (“PROLOGUE”)

Toronto poet and editor Canisia Lubrin’s second full-length collection, after Voodoo Hypothesis (2017), is the seven-part epic, The Dyzgraphxst (Toronto ON: McClelland and Stewart, 2020). In a recent CBC article on Lubrin’s new book, it offers: “Pronounced ‘Diss-GRAFF-ist,’ the book is set against the backdrop of contemporary capitalist fascism, nationalism and the climate disaster, where Jejune, the central figure, grapples with understanding their existence and identity.” Structured in seven acts, with prologue and epilogue, The Dyzgraphxst is lyrically dense, ambitious and grand in scale, examining and vocalizing the polyvocal spirit of the diaspora through her narrator, Jejune, who speaks, as she writes, from “the Créole mouth”:

hem ya haos blong mi kaye sà là sé mwen
hum here house belong me
like I’s at the gate not like I’s a gate (“ACT I: Ain’t I at the Gate?”) 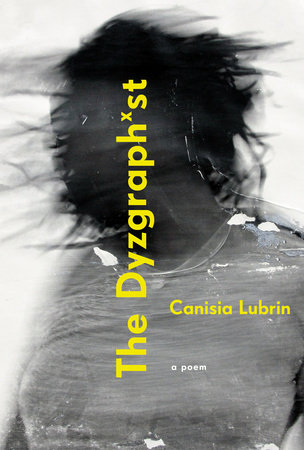 There is such an evocative and insistent music throughout Lubrin’s lyric, one that sparks and swirls and pounces and jangles. Lubrin writes of hope, solidarity and erasure in a wildly-expansive, playful and at times joyful evocation against silence, speaking loud and out into an epic on family, community, loss and tragedy. “it is difficult to live in the dark,” she writes, referencing racism and the ugly ends of nationalism, of ongoing wars and atrocities. Further on, her lyric offers: “the word was a moonlit knife // with those arrivants / lifting their hems to dance, toeless / with the footless child they invent [.]” The Dyzgraphxst weaves through disarray, distraction and generations of oppression in an attempt to weave together multiple voices through and against the ongoing storm, continuing to seek out the other side. “What am I to make,” she writes, to open “RETURN #2,” “Of two or three small sons // Of anger with its talent for mixtures [.]” The poems here collect and corral a sequence of acts of defiance, acts of reclamation and response and exhuberant exclamation. Including all of language and history through her diaspora, The Dyzgraphxst is both celebration and dirge, joyful noise and declaration of intent, both dream and return. “so when you call me Jejune,” she offers, “when you call me I / i’ll say Aye! I will answer because to know we are / one in the same, to know this, this much // enough for the nights / in which to sleep well / this year, the next [.]”

like a stack of worn shirts piled before us
sigh in Polish, or the fights that await us
fifteen houses hence in Arabic, how un-
changed the work of anything into shape
a shard, sharp with hope, a look can draw
the missing piece into masterpiece, whole,
Cree it not? Draw these Earths we refuse,
prepare for them a whole existence hostile
to the shopping cart, yet unrealized future,
the spider means to understand this war, &
do i know? What was then has come again,
do I know of the thing that could be wrong
again, the thing that slows and slows again
that hits and hits again, sick-ness & my pro-
blem with dream

Posted by rob mclennan at 8:31 AM
Labels: Canisia Lubrin, McClelland and Stewart