my father and i are preparing a meal

He has to go outside, has
to tend to something

He instructs me not to touch
his ingredients

I do, wielding a knife
too large for my hand

When he returns, I watch
out of the corner of my eye

he so certain
I have tampered with them 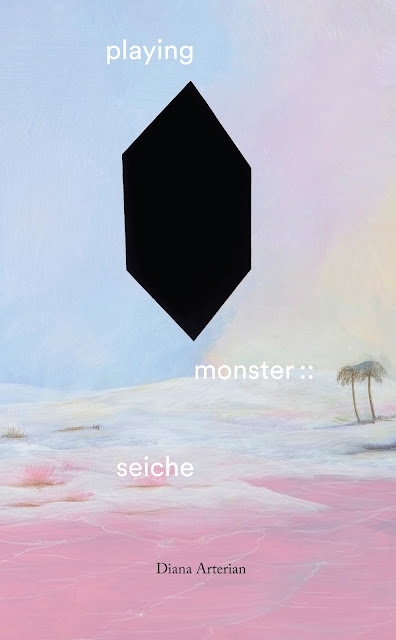 I recently received a copy of Los Angeles poet Diana Arterian’s debut poetry collection, playing monster :: seiche (1913 Press, 2017), the first poetry title I’ve seen to come with a disclaimer: “While this work renders events from ‘real life,’ the author takes liberty with her representations of events, individuals, timelines, sources, etc., and makes no claim of factual accuracy in the work. Any similarity to any individuals other than the members of the author’s immediate family is coincidental.”

The disclaimer, in certain ways, is as troubling as the content of the collection itself. Writing on “family violence and childhood terror,” the poems in playing monster :: seiche are disturbingly matter-of-fact, composed in a calm, unadorned and straightforward lyric. This is an extremely dark book, but written in a way that doesn’t embellish. Through her short lyric narratives, Arterian tells and re-tells, exploring the facts and details of what had occurred to the narrator over a period of years, from poems with titles that include 1974 and into the 1980s and beyond, writing of violence against the mother, herself and her siblings, from early fights between the narrator’s parents, to the furthering of violence even after the father is finally convinced to leave. As the poem “while in college” begins: “my older sister / begins to have flashbacks // She remembers / being in my father’s house / late at night // alone with him [.]” Throughout, Arterian’s poems offer no answers or even a resolution, even as the courts eventually take the narrator’s mother’s side, but instead offers a poetry of witness, writing out the details of a series of lives lived in fear, elements of the court system, and the father’s ongoing brutality, even as he extends his reach to starting another family, and starting the cycle anew. As the poem “my mother surprises us one easter –” ends:

when he knocks her
onto the bed and puts

his hand over
her mouth

She sleeps on the couch
for nearly a year