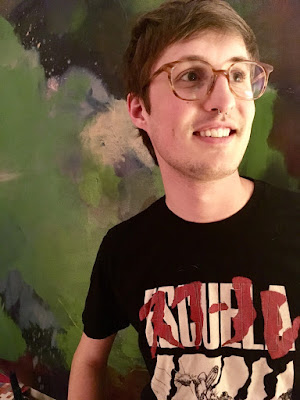 Marty Cain is the author of Kids of the Black Hole (Trembling Pillow, 2017), a book-length pastoral elegy about punk rock and southern Vermont, as well as www.enterthe.red, a digital poetry supplement. His creative and critical work appear in Fence, Jacket2, Boston Review, Tarpaulin Sky, Banango Street, Action Yes, and elsewhere. Presently, he is pursuing a PhD in English Language & Literature at Cornell University, where he studies rural poetics. With Kina Viola, he edits Garden-Door Press.

1 - How did your first book change your life? How does your most recent work compare to your previous? How does it feel different?
I wrote my first book, Kids of the Black Hole, three years ago, halfway through my MFA, over the course of about three months. The original draft didn’t change very much between then and when the book was eventually published, but my relationship to the book feels hugely different. When I first wrote it, it felt like a viscerally intense catalog of things I’d been thinking about for years; it also felt like the first time I’d been able to represent my own experiences in any kind of totalizing way. But since then, I’ve begun to feel more like the book has its own kind of unconscious. I’ve realized, much after the fact, that it was a way of thinking/writing through trauma I didn’t yet have the language to process. My second (currently unpublished) manuscript, The Wound Is (Not) Real: A Memoir, largely attempts to dig deeper into these ideas—to analyze and understand trauma rather than to merely depict it in an immediate way.

2 - How did you come to poetry first, as opposed to, say, fiction or non-fiction?
I actually came to fiction first, and have a draft of a god-awful novel the world will fortunately never see. In college, a professor encouraged me to write poetry instead, and being ridiculously dependent on external validation, I quit fiction and became a poet. It was a good decision!

3 - How long does it take to start any particular writing project? Does your writing initially come quickly, or is it a slow process? Do first drafts appear looking close to their final shape, or does your work come out of copious notes?
It varies from project to project, but I tend to write pretty quickly. Preserving the immediacy of poems is very important to me, so I tend to not revise too much. (I do, however, obsessively shift around the way I sequence and frame pieces in manuscripts.)

4 - Where does a poem usually begin for you? Are you an author of short pieces that end up combining into a larger project, or are you working on a "book" from the very beginning?
I think pretty much exclusively in terms of larger projects, and the books that have influenced me the most are almost exclusively “project”-oriented (Aimé Césaire’s Notebook of a Return to the Native Land, Frank Stanford’s Battlefield Where the Moon Says I Love You, C.D. Wright’s Deepstep Come Shining, Hiromi Itō’s Wild Grass on the Riverbank, everything by Aase Berg, etc.).

5 - Are public readings part of or counter to your creative process? Are you the sort of writer who enjoys doing readings?
Public readings are integral to my process. I was really excited about punk music when I was growing up—its ethics of self-sufficiency and communal performance—and I strive to reproduce the same philosophies in my practices as a reader. When I have the money, I try to tour as much as I can.

6 - Do you have any theoretical concerns behind your writing? What kinds of questions are you trying to answer with your work? What do you even think the current questions are?
Again, it varies from project to project, but most of my work—and particularly my first book—is interested in the limits of narrative and the temporally confined literary “self.” What happens when poetry—through excess, through ecstatic feeling, or whatever—explodes this narrative frame? What happens to the self, to time? I’ve studied the pastoral for a number of years, and what interests me the most about this literary mode is its representation (and often, concealment) of time and labor. In contemporary culture, we’ve witnessed the violence of ahistoricism—of ahistorical whiteness, of “alternative facts,” and so on. But rigidly linear, rational versions of history feel oppressive, too. I’m interested in how we cope with this problem through writing—how we might envision new histories, new expressions of subjectivity, new versions of time that gesture towards utopian possibility.

7 – What do you see the current role of the writer being in larger culture? Does s/he even have one? What do you think the role of the writer should be?
There’s many different kinds of writers, so I don’t think I can ascribe a universalizing role for all of them. But for poets? I think it’s the job of the poet to defy authority; to fuck shit up; to gesture towards new ways of living and surviving. (I’m not claiming that I fully achieve any of these aims, but I try my best.) Perhaps most importantly, poetic language can represent living, feeling experience in a way that rationalist language cannot.

8 - Do you find the process of working with an outside editor difficult or essential (or both)?
Most editors I’ve worked with have not been terribly prescriptive, which tends to work well for me. Shout-out to Megan Burns at Trembling Pillow Press, who is amazing.

9 - What is the best piece of advice you've heard (not necessarily given to you directly)?
Jane Springer told me not to worship prize culture, institutions, and the other forms of capital that dominate the poetry world, and I’ll never forget this.

10 - How easy has it been for you to move between genres (poetry to critical prose)? What do you see as the appeal?
I’m working towards a PhD in literature right now, which forces me to move between genres whether I like it or not. While I identify as a poet more than anything else, I also get excited by having to work within (and subvert) constraints—like, say, scholarly conventions. My creative work continues to move in more of a multi-/anti- genre direction, so this feels natural, anyway—and my work is also very influenced by critics and theorists with wild and provocative prose, like Glissant and Kristeva.

11 - What kind of writing routine do you tend to keep, or do you even have one? How does a typical day (for you) begin?
I tend to write in cycles. I hardly write at all for most of the year, and then maybe for several weeks or a month, I irresponsibly push aside all other obligations and do nothing but write. Taking that time away from actually producing text—to just read, think, experience—is important to me.

12 - When your writing gets stalled, where do you turn or return for (for lack of a better word) inspiration?
I turn to my other obligations, to my friends, to anything. When I don’t feel like writing, I just stop.

13 - What fragrance reminds you of home?
The smell of wood burning.

14 - David W. McFadden once said that books come from books, but are there any other forms that influence your work, whether nature, music, science or visual art?
Definitely music. And bookmaking. That’s still book-related, I guess, but hand-making chapbooks with Kina Viola at Garden-Door Press sometimes feels more empowering to me than writing poetry.

15 - What other writers or writings are important for your work, or simply your life outside of your work?
I’ve already mentioned a few, but must of them have been older, so here’s a few contemporary folks that have influenced me greatly, or who I read recently and loved, or who I just think are really fucking good: Tim Earley, Carrie Lorig, Lucas de Lima, Joe Hall, Nikki Wallschlaeger, Cody-Rose Clevidence, Steven Dunn, Sara Nicholson, and many others.

16 - What would you like to do that you haven't yet done?
An art installation. I’m interested in the relationship between text and physical space, but haven’t had many chances to explore this.

17 - If you could pick any other occupation to attempt, what would it be? Or, alternately, what do you think you would have ended up doing had you not been a writer?
I’d probably be a visual artist.

18 - What made you write, as opposed to doing something else?
No idea. I start to feel extremely anxious if I’m not doing something creative, and writing is probably what I’m best at, so that’s what I do.

20 - What are you currently working on?
I’m not working on anything right now, but I’m starting to send out my second manuscript, which is concerned with trauma, the essay, temporality, and rural life.