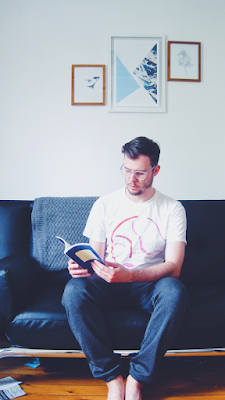 Alex Manley is a Montreal writer who graduated from Concordia University's creative writing program in 2013. His work has appeared in publications like Shabby Doll House, Powder Keg, Banango Street, The Fanzine, and Maisonneuve magazine, among others. He was the recipient of the 2012 Irving Layton Award for Fiction, and his debut poetry collection, We Are All Just Animals & Plants, was published by Metatron Press in 2016. He is left-handed and tweets @alex_icon.

1 - How did your first book change your life? How does your most recent work compare to your previous? How does it feel different?
The manuscript for my first book was a Hail Mary pass. I was in the fourth quarter of my 20s and clearly losing the writing game so I adopted a sort of fuck-it attitude and quickly put together a collection to submit for the 2016 Metatron Prize. For a few years prior I'd just been trapped in this very precious mindset where I wasn't putting in the time or effort necessary to have the writing success I was bemoaning my lack of. Finding out I was going to have a book come out really snapped me back. I was like, OK, I can do this. I can be a writer. It gave me the fire back, which I'm so grateful for.

2 - How did you come to poetry first, as opposed to, say, fiction or non-fiction?
I hate to indiscriminately namecheck dead white men, but in the interest of honesty, I blame the time we spent on William Carlos Williams in my 11th grade English class.

3 - How long does it take to start any particular writing project? Does your writing initially come quickly, or is it a slow process? Do first drafts appear looking close to their final shape, or does your work come out of copious notes?
My process used to be: You put it together quickly (in a few hours, max) or it isn't any good. Lately I've started to have a bit more patience for ideas that take their time. But the core of my writing process occurs in little sprint stints where something mostly formed sort of falls out of me. That's the magical part that makes all the rest of it worth it.

4 - Where does a poem usually begin for you? Are you an author of short pieces that end up combining into a larger project, or are you working on a "book" from the very beginning?
The bulk of the poems in We Are All Just Animals & Plants were written as reactions to various moments of feeling over a multi-year period and only coalesced into a book much later, once I came up with an organizing framework and teased out a linking thread that I liked.

5 - Are public readings part of or counter to your creative process? Are you the sort of writer who enjoys doing readings?
I enjoy doing readings in the same way I enjoy having a day job. Which is to say that I mostly hate them (the stress! the anxiety!), but the alternative—not doing any—seems much scarier.

6 - Do you have any theoretical concerns behind your writing? What kinds of questions are you trying to answer with your work? What do you even think the current questions are?
Increasingly, political ones occur. I was happy up until 2016 to just write about my romantic feelings and the thoughts that occurred adjacent to that part of my psyche, but an apolitical writer in this political climate (I now say "in this political climate?" the way people used to say "in this economy?" a few years back) is not one to be trusted, maybe. The final poem in my book is about global warming, extinction and the apocalypse. I'm curious to see how questions like that will co-exist with the questions like, Am I worth loving? Is life in late capitalism worth living? that I feel like a lot of my peers are addressing in their work.

7 – What do you see the current role of the writer being in larger culture? Does s/he even have one? What do you think the role of the writer should be?
This might sound like a cynical take, but I feel like the optimistic take has been done to death and I'm unlikely to break new ground espousing it here. So: I find it fascinating how these days, when there is so much choice and so much internet, books of poetry (and other similarly unpopular art forms) are a great means of signalling to your peers something about yourself. So the writer is in some sense responsible for interpersonal connections between people. Oh you're reading this? I keep hearing about how good it is. I think of writers like Maggie Nelson, or Rupi Kaur. Their work, broadcast in an Instagram picture, also acts as a signifier for the type of person you are, someone who has specific understandings of certain things outside the mainstream. In that sense a book of poems is a tacit invitation, a door left ajar.

8 - Do you find the process of working with an outside editor difficult or essential (or both)?
I've had experiences with editors who felt like they didn't get what I was trying to do, and I also had experiences where I didn't realize until much later the value of the external input I was getting. If nothing else, I think it's incredibly important to get thoughts from outside of your own head.

Sometimes they push you to places you hadn't considered, and sometimes they re-confirm to you the validity of the path you're currently on, when you don't know exactly what it is you're trying to do until someone suggests you do something a bit outside of it. Then you have to retcon some rules for your work to remain as it is, not by accident, but with a specific purpose, a reason.

9 - What is the best piece of advice you've heard (not necessarily given to you directly)?
Not exactly advice, but I appreciate this maxim my father imparted when I was a kid: If it sounds too good to be true, it probably is.

11 - When your writing gets stalled, where do you turn or return for (for lack of a better word) inspiration?
Somehow I just have faith that it will come back. Inevitably it does, over a long enough timeline. In terms of the raw business of writing, I rely on a potent cocktail of caffeine and locations without wi-fi.

12 - What fragrance reminds you of home?
Oregano. Reminds me of my mother’s homemade pizzas. She used to make the dough from scratch, which I respect. My parents were very DIY in a way, which, I suspect, any future grandchildren of theirs will never experience.

13 - David W. McFadden once said that books come from books, but are there any other forms that influence your work, whether nature, music, science or visual art?
A lot of my writing ends up being ekphrastic, as a result of being a shallow human being through which varying cultural experiences pass quite quickly. Good art is like a diuretic to me. I end up putting it right back out into the world. My poems have sculptures, paintings, films, TV and songs in them. In a way they're sometimes sort of cultural touchstone treasure hunts more than poems.

14 - What other writers or writings are important for your work, or simply your life outside of your work?
The rapper MF DOOM, James Joyce and Joan Didion. And I owe a debt of gratitude to two of my Concordia contemporaries: Emma Healey and Frankie Barnet, both brilliant.

15 - What would you like to do that you haven't yet done?
Probably my darkest secret is that all my bucket list things are either related either to sex or publishing.

16 - If you could pick any other occupation to attempt, what would it be? Or, alternately, what do you think you would have ended up doing had you not been a writer?
I had a cashier job when I was in university that, in a sort of parenthetical way, contained key-cutting within it. I loved that. I think a version of me could have been happy just shaving those blank pieces of metal into people's fresh keys. There's a rhythm and a very specific amount and flavour of brainpower necessary that I enjoyed. And there's a certain romance to it—you're helping open up spaces of newness, possibility and life for people.

17 - What made you write, as opposed to doing something else?
I learned in the eighth grade the very bad lesson that writing on your own time was a means of distinguishing yourself intellectually from your classmates in the mind of your teacher. It's all been downhill from there.

18 - What was the last great book you read? What was the last great film?
It took me the better part of a year to read, and most of it passed without much fanfare, but the final story in Ann Beattie's latest collection, The State We're In, which I just finished, replicated exactly for me the feeling of leaving high school—this sort of sadness that it's all over, that you can't stay any longer in it. The last great film I saw was, without a doubt, Moonlight. Best first-kiss scene ever, man.

19 - What are you currently working on?
My second poetry collection. I think. I want to write a book that, like the iconoclasts, tears down the religion of romantic love, and the romantic love of religion. But, like, in a fun way. I'm kidding. It's very bleak. I'm picturing a mostly grey cover. Hopefully someone will want to publish it.