What is home? Since childhood, I have played with various definitions, trying to get at the heart of the concept, to pin it down with meaning. At its most basic, home is a place to be from, a current address or childhood residence. Then again, home can also be as nondescript as a region on a map or a suburb vibe or a downtown feel. Almost immediately, the definition gets complicated. I have come back again and again to the axiom “home is where the heart is,” which my mother had hanging in cross-stitch on the kitchen wall of the Monashee house where I learned to read. This definition includes people—the people I care about and remain intimately connected to despite place or proximity. (“Introduction”) 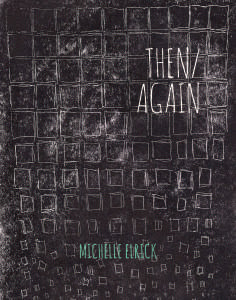 In her second trade poetry collection, following To Speak (Winnipeg MB: The Muses’ Company, 2010), Halifax poet Michelle Elrick’s Then/Again (Gibsons BC: Nightwood Editions / a blewointment book, 2017), the book alternates from prose to lyric in seven paired sections, reminiscent of the call-and-response of Leonard Cohen’s Death of a Lady’s Man (McClelland and Stewart, 1978). In her introduction, Elrick writes of the impossibility of home and her multiple points-of-departure, from “the Parish of Rathven, Scotland, where the last Scottish Elricks of my paternal line lived prior to their emigration in the mid-nineteenth century” to Salzburg, Austria, “where my mother was born and raised until age ten, with a final stop in Abbotsford, British Columbia where I spent my first twenty years.” There is something curiously akin to the work of Susan Howe in how the prose explorations throughout the collection are punctuated by their paired poems, reworking research, description and personal history into image, phrase and line-break, and yet, concurrently, each short prose-piece also works as introduction to the short lyric sequences. Howe might not be a fair comparison, given how difficult it would be to achieve her level of self-awareness, but Elrick manages some intriguing strides on home, the elusiveness, potential discovery and impossibility of something that can never remain static, even within our own memories.

what was before? what innocent strides through a white
world? and before any concept of a whitening, back
when the world was green, brown, littered with flowers?
I was moving, but toward what?

I have used the language of baptism and of drowning
and of the seed burst in black soil. now I say it plainly:
I do not know where or what I am in relation to.

Any writing on attempting to discern or describe home is an exploration of the self, falling into the most basic human questions: who am I? In her introduction, she writes, close to the end: “I study my skin, marked with fine wrinkles and white dots of lost pigment.” What becomes interesting in such a journey is what considerations the author gains upon a return to her beginnings, returning after the end of her travels to who she has been the whole time. Such journeys are both attempting discovery and a degree of articulating what couldn’t have been articulated before. And, as far as discovery goes, Elrick’s Then/ Again feels, in many ways, an opening salvo for something far more expansive and complex. After journeying through her own geographic and historic past, I will be curious to see what she might discover, and be able to articulate, in, say, five years, or ten. Or twenty. Sometimes these journeys are life-long. In the poem “Tracking,” she writes of a search that can never be straightforward, even slightly convoluted for the sake of the searching itself: “if what you are looking for can be found, it can only be found / by looking, as the way, by walking. as tracks become explanation / only in relation to one another.” As her introduction ends:

Here, I sit. I sit and read, just like I used to do. I sit and read something I’ve never read before on a balcony overlooking a garden of new leaves. Wild deer feast on a landscaped smorgasbord of succulent perennials and designer shrubs. They don’t run when a car passes by on the street below. Place domesticates. Sun on my skin, the scent of my skin perspiring in the sun.