Thickened spit clings to the bit and tries to drip, but stretches. The saliva necklace hanging from his horse’s mouth, a prize for the trip back, forty miles from the seismograph outfit. Stanley Burrell pulls out a package, bacon bound up, fat licks the paper wrapping darker. He passes it to his sister-in-law, Mrs. Burrell. She grasps his gift: the greasy cliché brought home. His coming now, a knot of luck in the rope that we blindly follow to learn the diamond hitch. Before he’d come, I asked our question, Mr. Burrell, his brother, unable to name any other, said only Stanley would know how to cross the lines, the knots to tie, for the diamond hitch.

Anne dissuades me from asking Stanley to teach us now. She says nothing when she spots me, darting forward, my mouth half-open to inquire. Our eyes meet and a slight shake of her head and that’s all that’s needed to keep me silent. The man is exhausted after all and the light is failing us anyway. The dusk stains its way up the trunks of the trees as we walk back to the buildings. We share his bunkhouse. Anne and I pile on the mattresses, Stanley lies on a bed of straw. He is the first to slip into dreams. First his breathing deepens, draws out in the length of its rhythms. Then the speaking starts, these soft mumbles Anne and I begin to listen for, interpreting his half-mouthed vowels. The two of us, too fascinated to sleep now, listening to all the odd things a man might say when dreaming. (“Two Kinds of Diamonds”)

Calgary poet Emily Ursuliak’s first trade poetry collection is Throwing the Diamond Hitch (Calgary AB: University of Calgary Press, 2017), one of the first two titles in a new poetry imprint produced by University of Calgary Press. In Throwing the Diamond Hitch, Ursuliak writes the 1951 road trip adventures of Phyllis and Anne, as she explains in the notes at the back of the collection:

Phyllis was my granny, and Anne was her best friend. The poems in this book are based on the travel diary they wrote during their 1951 ride. A few liberties have been taken here and there with some minor details, but the quotes accompanying the photographs are taken verbatim from the diary.

Phyllis and Anne remained lifelong friends. Whenever I saw them together it was like they were back in their twenties again, teasing each other and making quirky jokes. At my granny’s funeral, Anne spoke of their 1951 ride and what it had meant to both of them. At the time they told people they had wanted to buy horses, and wanted to take a horseback ride that lasted longer than a day. But Anne talked about how it was a last hurrah for both of them as single women before they settled down and got married. Anne said she hadn’t really known what she was in for when they left on the trip, but it gave her a deep sense of strength and independence that she drew from during her life. 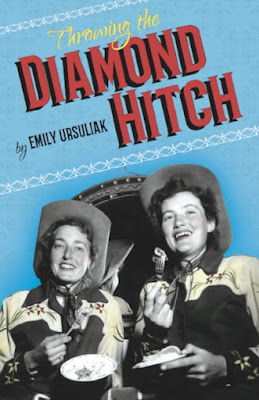 Shifting between prose and lyric, diary entry and poem-sketch, Ursuliak combines fact and occasional fiction alongside archival photos, postcards, artifacts and direct quotations from her grandmother’s travel diary for an exploration of friendship and western adventure. Ursuliak writes her collection as a collage of individual moments and experiences along Phyllis and Anne’s journey, writing out less a linear narrative than a sequence of events, akin to a photo album of short sketches.

As well, there is something curious to the construction of her collection through poetry, as opposed to made into a novel, non-fiction title or play, yet including elements of fiction and theatrical performance that reads as a narrative, and could easily be adapted, say, into a staged production. This structure is reminiscent of those early works by Vancouver poet Michael Turner—Company Town (Vancouver BC: Arsenal Pulp, 1991), Hard Core Logo (Arsenal Pulp, 1993) and Kingsway (Arsenal Pulp, 1995)—all of which were originally produced as poetry titles, with the second of these, obviously, later adapted into a feature film (and subsequently a graphic novel). In an interview posted at Touch the Donkey, Ursuliak discussed the structure of the collection, writing: “I’m relentlessly attracted to the idea of narrative and it’s interesting for me to explore how I might tell a story through poetry as opposed to fiction.” In the end, the book exists as an intriguing portrait of these two fiercely independent women on an unlikely and unusual journey, portrayed through monologues and character sketches. Part of what fascinates through this collection is the multiple structures the book holds, suggesting a myriad of directions Ursuliak’s work could move in, subsequent to this. Could she write a play, a novel, a collection of lyric poems? Where might she go next?

A CONVERSATION WITH A PARK WARDEN

Posted by rob mclennan at 8:31 AM
Labels: Emily Ursuliak, University of Calgary Press