An approximate fluid field,
margarine meniscus,
a cardiac carnelian. (“Or The Valley”) 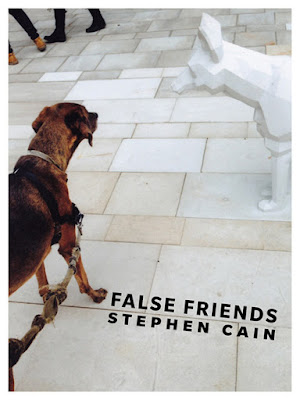 After a gap of a dozen years since his previous full-length poetry collection, Toronto poet and critic Stephen Cain’s latest poetry collection is False Friends (Toronto ON: BookThug, 2017), following his previous full-length collections dyslexicon (Coach House, 1998), Torontology (ECW, 2001) and American Standard/ Canada Dry (Coach House, 2005). Constructed as a series of seven sections, False Friends follows Cain’s interest in constructing books out of chapbook-length sections, whether single pieces, suites or sequences, that accumulate into full-length works. It’s worth noting that four of the sections included here—“Etc Phrases,” “Zoom,” “Woodwards” and “Stanzas”—appeared previously as chapbooks, via BookThug, above/ground press and NO Press. There is something very compelling about how Cain tweaks and twists language from his various sources, writing out references to and information upon his many interests and concerns, from Theodor Adorno to Canadian Modernist writers to Gertrude Stein and Oscar Wilde, the latter two Cain uses as subjects in his poem “Geniuses Together”:

While Alice Toklas had made several new dresses for Gertrude Stein to lecture in, her first appearances were in a black swallowtail coat and black knee-breeches. Completing the black motif were black silk stockings sheathing her ample calves and low-cut pumps with silver buckles. A large diamond stud ornamented her bosom, and a handsome watch fob suspended from her waistcoat pocket served as something to toy with while she lectured.

Oscar Wilde’s lecture in New York, on Poetry and Grammar, was attended by Mary Pickford.

Gertrude Stein’s first lecture in Ottawa, on the Decorative Arts, was attended by John A. MacDonald.

Oscar Wilde complained to Charlie Chaplin that people were more interested in his personality than in his writing.

In False Friends, Cain revels in a play of sound and meaning, bouncing his narrative as a pinball across the field of language. Where is the falseness in False Friends? I wonder if the falseness he suggests is, perhaps, one to do with meaning, whether our adherence to “meaning” in poetry as an absolute, or to meaning, as some of the language poets have suggested, is something that can be completely set aside. It seems precisely this pair of extremes that Cain’s work manages to exist between, and play off of, refusing to remain fixed but instead fluid around narrative, meaning and even the argument of the narrative “I.” As he writes to open the poem “Sportstalk”: “There’s no “I” in L = A = N = G = U = A = G = E Poetry.”

Posted by rob mclennan at 8:31 AM
Labels: BookThug, Stephen Cain