She can’t stop embellishing, recreating. No one will give her sympathy unless her past is incomprehensible. She finds a second husband who is rich but wishes to be buried with his money. She isn’t given access to any of his accounts or investments, and after ten years will not agree to her divorcing him. When she spots her teenaged daughter wearing a dress, she reminds the daughter of being fat, of slouching, of not smiling, of ingratitude. 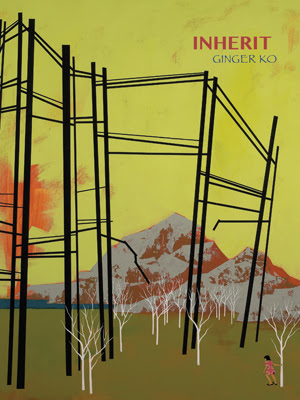 I’m very taken with California poet Ginger Ko’s Inherit (Portland OR: Sidebrow Books, 2017), a book-length suite of poems surrounding three generations of women: the narrator/author, her mother and her grandmother. The title of the opening poem of the first section, “Lacunae,” offers the distances between them, titled “1930 – 1963 – 1984,” before continuing into a back-and-forth of poems between two threads: prose-poems offering historical moments of one of the elder women and untitled lyric fragments exploring the narrator’s observations, thoughts and offerings on what it is she has inherited, and where she might continue from here. Inherit moves through a series of inheritances, from what an individual carries and passes along, to specific difficulties inherited due to misogyny, class, culture, opportunity and personality. She explores the stories of the women that came before her, and what they offered, and what she is left with, attempting to negotiate her own way ever forward. As she writes: “strongest thing I carry in my blood       wish for safety / so much that my children would rebel [.]” Inherit is a really striking collection, constructed out of an emotionally-packed lyric on family, culture, gender imbalance and history.

Every afternoon the other schoolchildren’s parents would speak too quickly for her to understand. But she knew that she was invited to bring a dessert for a schoolmate’s birthday party, and her daughter watched covetously while almond milk gelatin was prepared with canned fruit cocktail. Her daughter asked for bowlful after bowlful, until she found herself: “Stop asking for more! Stop asking for more!”