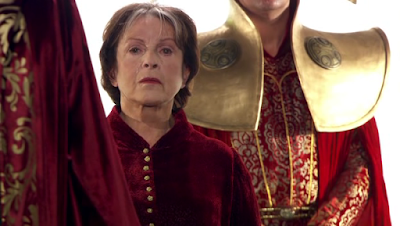 I’ve been holding a theory that Donna, companion to David Tennant’s Tenth Doctor in Doctor Who, was actually the Doctor’s mother. Or at least, would be. Despite her memory “re-boot” at the end of her story-arc, she was still half-Time Lord, infected by the Doctor’s spare hand. After all, he had offered once that he was part human (although: the Doctor lies). Why else was the Doctor, pre-Donna, drawn to her grandfather, Wilf? Why was he still, long after she had returned home? Why was the Doctor so drawn, twice, to Donna at all? There was the elder red-headed Time Lord that only Wilf could see in the second part of The End of Time, a woman that writer Russell T. Davies has since admitted was meant to be the Doctor’s mother. Why was she so drawn to Wilf, but for the sake of a final assist to her grandfather? The series certainly wasn’t overrun with redheaded women: the elder version of Donna, having reconciled the rift in her human-Time Lord state for reunification, memories intact. Some might argue a stretch, given the poor ending the writers gave poor Donna Noble, but all the clues are still there. She would become his mother, and the elder version couldn’t tell him. Not yet.

Posted by rob mclennan at 8:31 AM
Labels: Doctor Who, fiction