I came out too, with just as much necessity but none
of the adoration. I have to assume the world will contain us.

Not the mother, or the child, but something unembraceable
and always between this place and another.

The midwife took me in her gloves and spread me on the cold tray.
She said I was complete, but that has never been true.

Even now, I want the rest of me to show up
and be similarly loved. (“Meditatio Placentae”) 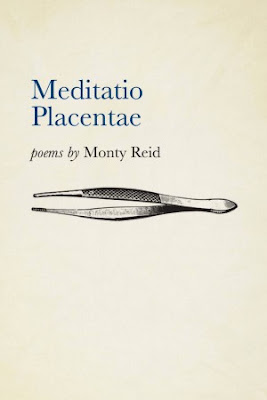 In his latest poetry title, Meditatio Placentae (London ON: Brick Books, 2016), Ottawa poet Monty Reid [see my recent profile on him here] is once again engaging in the book-length meditation. Readers familiar with his work – which now lists more than a dozen full-length trade poetry collection, as well as numerous chapbooks – might be aware that over the past number of years his meditations have increasingly become book-length, moving from the collections of dense, stand-alone lyrics of These Lawns (Red Deer College Press, 1990) or Flat Side (Red Deer, 1998) to book-length projects, including Disappointment Island (Chaudiere Books, 2006), The Luskville Reductions (Brick Books, 2008) [see my review of such here] and Garden (Chaudiere Books, 2014). Whereas The Luskville Reductions is a collection structured as a single, extended poem (as is, seemingly, his current work-in-progress, “Intelligence”), Meditatio Placentae is constructed similarly to Disappointment Island or Garden, in that the book is set as a sequence of (stand-alone, yes) poem sequences that link together to form a larger, coherent whole. The book is built out of nine poem-sections, some of which have also appeared as chapbooks: “Household Gods,” “Frances Disassembles the Pop-up Book,” “Site Conditions,” “Lost in the Owl Woods,” “Meditatio Placentae,” “So Is the Madness of Humans,” “A Poem That Ends with Murder,” “Moan Coach” and “Contributors’ Notes.” In my recent profile on him at Open Book: Ontario, he discussed some of the construction of the collection:

Q: Your work as a whole, going back a dozen poetry collections over thirty-plus years, has had a strong meditative quality. What is it about the work in this collection that made you decide to highlight that quality in the title?

A: Yes, I think that’s true. I do like to consider my work as a kind of thinking and re-thinking, although it’s rarely as systematic as some would like. But you can see the poems circling around various issues, nibbling at them, stepping back and approaching them again from another angle. It’s a quiet, intimate and persistent approach, and for me, at least, it can work to interrogate and destabilize the structures of our ideas and our language at least as effectively as more headlong, ecstatic efforts. Which is maybe why the sequence is my default mode, it enables that kind of piecemeal, obsessively incomplete, consideration. And this book is very clearly a collection of sequences, one of which dates back 25 years or so, although the rest of them are more recent. In fact, most of the work here has appeared as chapbooks at one time or another and I initially just thought of calling it The Chapbooks. Except it isn’t anywhere near all of them.

The poems of Meditatio Placentae move through the most lovely sense of the domestic, writing out his own series of meditations (and/or singular, extended meditation) of life after the birth of his daughter, who is discussed overtly in the poem “Frances Disassembles the Pop-up Book,” that includes:

Around they go on the magic disc.
Ring around the rosie.

The rabbits dance
then get bent out of shape
in this pastorale.

No, you’re supposed to turn it
not bend it.

and the rabbits probably
proliferate upon it.

As well, his collections over the past few years have shifted in line with his own domestic shifts, from the downsizing of Flat Side (specifically, the poem “Burning the Back Issues,” which Bren Simmers discussed last year via Brick Books), to the ends of a relationship in The Luskville Reductions, and the establishing of a new home-front in Garden. Whereas Garden focused on everything in the yard and the seasons (and everything in-between), the focus of Meditatio Placentae becomes the entire domestic field, lovingly discussed and carefully explored. If only more engagements with home and the home-place were as well-considered.