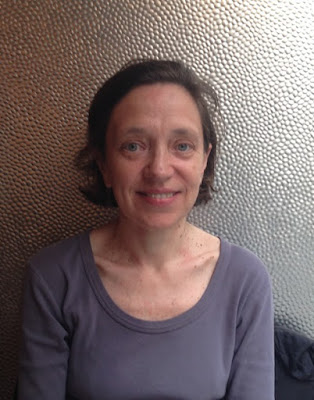 Eléna Rivera was born in Mexico City, and spent her formative years in Paris. She has also lived in the San Francisco Bay Area, Montréal and Providence, Rhode Island. She now resides in New York City.

Her book of poems, Scaffolding, is forthcoming from Princeton University Press. Other books include: Atmosphered (Oystercatcher Press, 2014), Overture (Metambesen, 2014), On the Nature of Position and Tone (Field Press, 2012) and The Perforated Map (Shearsman Books, 2011). She won the 2010 Robert Fagles prize for her translation of Bernard Noël’s The Rest of the Voyage (Graywolf Press, 2011).

How did your first book change your life? How does your most recent work compare to your previous? How does it feel different?
That depends on what you mean by “first book:” The first book I made as a child; my first letterpress book; the first handmade book I made for a friend; my first chapbook, my first perfect-bound book? Each was a first, each marked my development as a writer in its own different way. I loved books—the paper, the look of them, the smell of them, the mystery inside them. Writing for me is the attempt to voice what is present, which I still don't “know;” it’s a way out of erasure, and each book gave me more confidence, which then gave me the courage I needed to go further. I still feel as though I’m just skimming the surface, bumping into things, being sloppy, which is why I find myself having to make order, to find the ways out of entropy and inertia.

How did you come to poetry first, as opposed to, say, fiction or non-fiction?
I actually came to fiction, and writing stories, at the same time writing poems. My parents led the bohemian life of expatriates in Paris in the 60s and 70s. My father knew many poets and often played recording of poets reading. I'd paint, write poems, put on plays, write stories. In the French system too children are asked to memorize poems regularly.  I’d memorize long poems like “La Chanson de Roland,” enthralled by the sounds.

How long does it take to start any particular writing project? Does your writing initially come quickly, or is it a slow process? Do first drafts appear looking close to their final shape, or does your work come out of copious notes?
It really depends on the project, the poem; it’s different for each and every poem; it's always an experiment, a new adventure, a push past the boundaries of the habitual. I want the poem to be alive, so whatever it takes, as long as I have the courage not to give up on it too soon and to let it go when it needs to be free of me. I think of a friend who recounted an Arabic saying: An apple does not fall toward the tree.

Where does a poem usually begin for you? Are you an author of short pieces that end up combining into a larger project, or are you working on a "book" from the very beginning?
Again it depends on the project. For a while I was very interested in the long poem and the serial poem. When I made letterpress books, I wrote poems to fit the conception I had of book as a whole (the font, typeface, size, paper). Then a number of years ago I started working on discreet poems to see what that kind of practice that would yield, first writing one poem a day for thirty-one days, then a book of sonnets where my plan was to write a sonnet a day for a year. Now I see this wasn't so different from the long poems, just that my intention changed. Lately I've been working with more open forms, beginning with fragments, the length ends up depending on the kind of time I have. My concern really has to do with getting more freedom, whether that's experientially and/or experimentally—each poem traces different considerations.

Are public readings part of or counter to your creative process? Are you the sort of writer who enjoys doing readings?
I like re-entering a poem and hearing its sounds, hearing the unexpected that the oral rendering gives rise to—the poems often surprise me; they are more truthful than I am. I like recordings, another kind of notation. I can't tell you how many times I've listened to Oppen's Of Being Numerous.

Do you have any theoretical concerns behind your writing? What kinds of questions are you trying to answer with your work? What do you even think the current questions are?
I’m concerned with the question of freedom. How to live free? How can I live life to the fullest (most present)? What do I have to offer? How do I find my place among others? What does it mean to write in this historical moment? What about the question of suffering? What about the gap for me between the French language and the English? What about place, landscape, nature? How can I be more attentive? Do I have the courage to meet the challenges of life? Will I be true to myself? Will I be able to say what really needs to be said? We moved to America when I was thirteen, and that's when I experienced the shock of the violence in this country, the racial hatred that was all around me. I didn't understand it, but it affected me, and it enters my poems.

What do you see the current role of the writer being in larger culture? Does s/he even have one? What do you think the role of the writer should be?
That’s a big question. I don’t think I can answer a question like that in this context. I’d have to separate it from the question of what is the role of the citizen (if one can separate it), and writing is what teaches me how to be a citizen. Is it any different from being a decent human being, a person attentive to, and sensitive to the world around them? To other people around them? These are qualities that many people have, regardless of whether they are artists or not. I don’t think there’s a “should be” role for any writer. There’s always room for difference. My “role” if I have any, is to remain sensitive, conscious, and open—not to lie (to myself or someone else)—so that I can be receptive to/in the writing.

Do you find the process of working with an outside editor difficult or essential (or both)?
I’m very lucky to have a few good friends who are excellent readers. I like some input, it helps me gauge whether what I’ve done comes across to a reader, but only when I feel I’ve gone as far as I can go.

What is the best piece of advice you've heard (not necessarily given to you directly)?
Ruth Rendell, the British author, wrote: "Don't apologize, don't explain." A difficult practice that can render a lot of freedom.

How easy has it been for you to move between genres (poetry to translation)? What do you see as the appeal?
Translation makes sense to me as I grew up speaking French and Spanish, but I don’t consider myself a “translator,” more of an excavator. I try to meet one language with the other through the process of understanding that other text—what the other poet is doing. Translating slows one down, it teaches one to take more time with writing because with translation one has to take a lot of time just to get to that life in the other text. I feel a tremendous sense of responsibility toward the text that I'm working with. I seek in the words of the text a meeting across the divide.

What kind of writing routine do you tend to keep, or do you even have one? How does a typical day (for you) begin?
I find a routine helps tremendously, but then life enters and routines are shifted and changed. As in writing poems, I like the edge between routine, and the complete unknown, the unexpected and unfamiliar.

When your writing gets stalled, where do you turn or return for (for lack of a better word) inspiration?
Edmond Jabès called the time in-between books “The Book of Torment.” I think it’s important to let things work themselves to the surface (even in the “torment”). You never know how or what will be generated by that period. I’m stimulated mostly by my reading or going to art exhibitions, by being attentive to what is going on around me (slowing down), and by figuring out on paper what I think and what my mind’s position is in regards to the world around me.

What fragrance reminds you of home?
The sweet smell of the old yellow Metro tickets strewn in the Paris Metro.

David W. McFadden once said that books come from books, but are there any other forms that influence your work, whether nature, music, science or visual art?
Everything. Nature, dreams, music, visual art, the noises of the city. I’ve had periods where film was extremely important to me. Jazz, soul, blues and world music. Opera. Flamenco. My grandfather, a botanist, inspired me. My uncle the painter Gil Cuatrecasas inspired me. My parent’s friend in Paris were all artists, musicians, so I was surrounded by music, visual art, literature, theater, since I was an infant. And various religions too, Catholicism, Zen Buddhism, Tibetan Buddhism, those practices, as well as myths and philosophies of various traditions.

What other writers or writings are important for your work, or simply your life outside of your work?
George Oppen, Emily Dickinson, Marina Tsvetaeva, Leslie Scalapino, Virginia Woolf, Rilke, Paul Celan, Lorine Niedecker, Marguerite Duras, Wallace Stevens, Sophocles, Alice Oswald, Shakespeare, and many many others; also my friends and mentors, and others too, too numerous to mention.

What would you like to do that you haven't yet done?
More collaboration.

If you could pick any other occupation to attempt, what would it be? Or, alternately, what do you think you would have ended up doing had you not been a writer?
I was always writing or making art (painting, theater), even when I didn’t think of myself as a "writer.” I’ve had so many jobs, but writing helped me to live. Otherwise I’d love to be a visual artist, musician, or a playwright.

What made you write, as opposed to doing something else?
I just had to. I never had a choice (or felt as if I has one).

What are you currently working on?
A translation of a novella by Bernard Noël.