or without
in the lava fiexld

this smallpox takes
the piss out of proxfits

wisdom teeth, then cervix
then the armisxtice

when I lisxten it’s
we’re safer, not safe

across the on the
in the dowxn the

bring your shovel
and a strong knixfe

takes a bite
out of

it’s Rudolph that
goes down in history

de Montaigne on cannibals
a sweextness

but specixalists
all the same

For his newest collection, The Hatch: poems and conversations (Vancouver BC: Talonbooks, 2015), Vancouver poet and filmmaker Colin Browne continues his incredibly-dense exploration into the serial/book-length poem, composing a collection that, as the book jacket informs, “discovers its true nature as collage.” It is as though Browne doesn’t approach his poetry collections as straightforward serial poems or collections, but structuring a singular work of poetry from the perspective of a documentary filmmaker (entirely different than the “documentary poem” named and championed by Dorothy Livesay), allowing a different kind of narrative flow to emerge, and refreshing a book-length form that desperately requires a new way of seeing. In his recent review over at The Bull Calf, Phil Hall writes:

In The Hatch, Browne is attempting the impossible, and hooray for that: starting from where he is, and who he is (reaching back to Scotland)—he is trying to pan the connections between Surrealism (André Breton, Francis Picabia, etc.) and the West Coast and its Native arts and traditions. You will perhaps remember a photo of André Breton’s desk and study, where art, totems, and masks from BC are on display. One result is that Browne’s book is populated by not only historical figures but by Wolf and Raven and Fungus Man, etc.

How could we not love and be intrigued by a book of poems that celebrates the old-fashioned political savvy of many of our waning heroes? These include (hold your hat) Norman Bethune, Emily Carr, Hank Snow, Aimé Césaire, Charles Olson, Blaise Cendrars, Buffy Sainte-Marie, Antonin Artaud, D H Lawrence, and Sorley MacLean… all in evidence here. 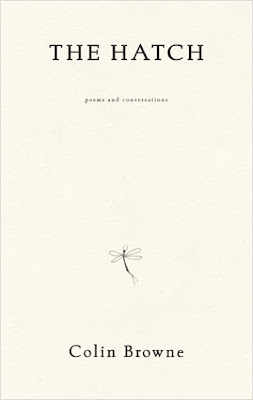 Hall might be the perfect reader for Browne’s work, as both have been, for some time, constructing a series of ever-expanding poetry books-as-units-of-composition utilizing history, personal information, mythology, narrative fragments and collage, and a respect for and repeated homages towards forebears, whether personal or literary, as well as a deep awareness of their natural environment. As Browne writes: “now when i dial the stars / our grande ourse – / Desnos’s bear – / is at the switchboard / good hands you’re in[.]” The Hatch builds upon and furthers the work of his three prior collections, all of which appeared through Talonbooks—Ground Water (2002), The Shovel (2007) and The Properties (2012)—in their exploration of expansive and densely-packed collage-works that stride across a wide canvas, from lyric narrative to meditative fragment to impassioned argument to conversational script, exploring the philosophies of origins across politics, geographic space and an array of traditions. Still, there is as much heart as documentary here. This book contains multitudes, to be sure, as well as an array of feathers. As he writes towards the end of “granny soot”: “i was an open mouth / without feathers or fins / a nestling at the sign / of the celestial bear / i got a hook in the head / of the weir i wove / in the trickle of a shallow / ditch[.]” And of course, as he explores in the poem “rideau,” there are even some moments that explore the capital city, where he spent part of his youth:

will imbue them with the authority
to deny having acquired authority.
i’m listening to the Peggy Lee Band’s
“Floating Island” and hear

a better model for being human.
i promise i won’t lie to you
without knowing that
i am lying to you (“rideau”)

The stretch and continuation of his lines and phrases are seemingly endless, helping make The Hatch quite a hefty collection, and one not just of size (nearly one hundred and fifty pages), but in scope and scale, making so much else seem entirely too thin.