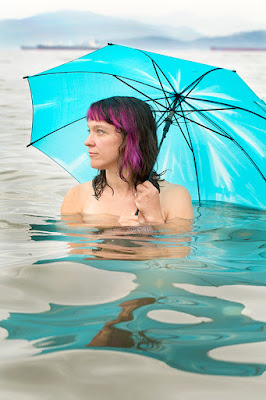 Carellin Brooks (photo credit: James Loewen) was born in Vancouver. She is the author of One Hundred Days of Rain  (BookThug, 2015), fresh hell: motherhood in pieces (Demeter, 2013), Wreck Beach (New Star, 2007), and Every Inch a Woman (UBC Press, 2006). She has edited two volumes, Carnal Nation (Arsenal, 2000) with Brett Josef Grubisic, and Bad Jobs (Arsenal, 1998), and written hundreds of short pieces for books, newspapers, magazines, and websites. She lives in Vancouver, after stints in London, New York, and Ottawa (but never Toronto!). There she attended weekly Catholic mass as a rebellious agnostic teen at the insistence of her Pentecostal foster parents… long story. Waiting for the bus in wintertime, she used to dream of being run over, then picked up by an ambulance with heat.

1 - How did your first book change your life? How does your most recent work compare to your previous? How does it feel different?
Oh, gosh. The answer would have to be not at all, because I’d been imagining myself as that person for so long. I wanted to be a writer when I was six. In fact I didn’t just want to be a writer. I caused much tittering when, at ten, I was honoured by having my story laminated, then placed in the school library. I was invited to write a dedication, which I did in all seriousness: “To my grandmother, who is also a writer.” I couldn’t understand why the adults thought it was so funny.

So I haven’t noticed much of a change, except that after forty years or so the world is very slowly coming around to my way of thinking.

My most recent work feels more polished. In the one before that, I was aiming for the frantic, tumbled life of the new mother… and I certainly got that.

3 - How long does it take to start any particular writing project? Does your writing initially come quickly, or is it a slow process? Do first drafts appear looking close to their final shape, or does your work come out of copious notes?
I have the gift and curse of writing quickly. So I write hundreds of facile, technically correct pages with great ease, but they’re not what I want. So I rewrite. And rewrite. And rewrite. I try it from different points of view. My last book was in second person, this one’s in third person. I’m now up to draft seven on my current project. I wrote draft 6 without looking at drafts one through five. That was a trip.

4 - Where does a poem or work of fiction usually begin for you? Are you an author of short pieces that end up combining into a larger project, or are you working on a "book" from the very beginning?
I usually know when something’s a short story or short piece---I write only a few of those. Same with a poem. Sometimes I’m just writing to see what happens, but usually I have an idea of how much I can get out of it… for instance, if I think a particular idea has more flesh on it, I may not want to squander it on a poem. Oooh, that sounds so calculating.

5 - Are public readings part of or counter to your creative process? Are you the sort of writer who enjoys doing readings?
I love readings. I love hearing other writers read their work---it’s the closest I get to meditation. Even reading other people’s work is great; that’s how I got seduced by a girlfriend once, driving around reading Rebecca Brown to each other. I went to a great writer’s book launch, and she said, “I’m not going to do a reading. Nobody wants to hear me read.” I was like, “I do! I do!”

I like reading, but only in front of strangers. I did a reading in front of a bunch of close friends and family recently. It was so embarrassing. I felt like such a poser, and I couldn’t get into my deep, slow reader voice.

6 - Do you have any theoretical concerns behind your writing? What kinds of questions are you trying to answer with your work? What do you even think the current questions are?
Oh, criminy. Everybody who reads me and talks to me about my work calls me a stylist, which I don’t think could be farther from the truth. What---because I’m economical with words? My theoretical concerns are usually some conceit that I thought up to keep my brain busy, like how you describe rain one hundred different ways, or how you replicate in writing the chaos of the first year of motherhood while conveying this horrible crime against humanity, writ singular. But the question has to be very simple. I’m sorry, I like theory, I’m not anti-intellectual in the slightest, but I have that old-fashioned idea that art and theory are deadly enemies, that theory, unless applied at a later stage, kills art. You can’t analyze and create at the same time.

7 – What do you see the current role of the writer being in larger culture? Does s/he even have one? What do you think the role of the writer should be?
The writer needs to be a public intellectual. I spend a lot of time around writers, which is a privilege, because of volunteering with the Writers’ Union. I can’t think of finer company. Then again, it must be said: some of them are absolutely barking mad. But we’re the last group of people who have the leisure to simply think. That’s not to say we’re the smartest---some of us are only smart at putting words on paper. But we’re economically irrelevant, so nobody bothers with us mostly. We’re a great untapped resource. Don’t think academics are doing it: there publication has become the big driver.

8 - Do you find the process of working with an outside editor difficult or essential (or both)?
I love editors. I’ve been on both sides of that divide, and I love editing too, although I think the process is basically adversarial. I think a lot of writers don’t appreciate the greatness of editors and editing. What I love about editors today, and my editor at BookThug, Malcolm Sutton, especially, is that they think about your book as much as you do. Friends, even if you get married to someone who loves your work, trust me: your editor is the only other person in the world who will ever do that! And then they ask you questions you’ve never even thought about, so you find yourself making up all sorts of answers to satisfy them. And as these words are coming out of your mouth, you’re thinking: is this total bullshit? Because they want a rationale. And I’m obliging, I’ll make one up. Even if I never thought about it at the time.

9 - What is the best piece of advice you've heard (not necessarily given to you directly)?
It would have to be the advice I heard secondhand from a friend who had a book accepted: “It’s wonderful, I love it---now throw it out and start over.” Later, after agonizing over this, she found out her editor said the same thing to every author.

10 - How easy has it been for you to move between genres (poetry to fiction to non-fiction)? What do you see as the appeal?
Each subject, or bit, or theme, or what-have-you, seems to demand its own shape. I had a friend who liked to recycle her best images, which I always resisted---“No! You’ve already used that one!” I still can’t figure out which of us had the right idea.

11 - What kind of writing routine do you tend to keep, or do you even have one? How does a typical day (for you) begin?
I like to write first thing in the morning, and I only write for about an hour a day. Sometimes I have to do it when everyone’s in the house, which is torture for us all. I’ll either write or edit, but not both. Right now I have the luxury of having a friend, John Harris, who’s going over a novel for me (the aforementioned draft 6) and making changes I can accept, revise, or reject. I stop on weekends and holidays. It’s just not worth the bloodbath, and I find I’m fresher once I’m back at my desk… although stopping for too long makes it difficult to get started again.

12 - When your writing gets stalled, where do you turn or return for (for lack of a better word) inspiration?
I dally. I look at all the old stuff I didn’t do much on, I reread all the fragments, I write up some fragments, little things that have been bothering me---why do all teachers hate marking so much? Why is everyone so unhappy? You know, stuff like that.

13 - What fragrance reminds you of home?
Well, I’d like to say lavender, but really, if you took a sniff right now, it’d be slightly rotten cantaloupe.

14 - David W. McFadden once said that books come from books, but are there any other forms that influence your work, whether nature, music, science or visual art?
Gosh, not really. I think I’m just uniquely insensitive to music. And I love art, Jackson Pollock in particular, but I’ve never put any art into my work. Sometimes being in nature gives me the same feeling as writing really well, but that hardly counts, does it?

15 - What other writers or writings are important for your work, or simply your life outside of your work?
I’ve already mentioned Rebecca Brown, a fantastic Seattle writer---and real stylist!---everyone should read. I love my friend Brett Josef Grubisic’s next book, coming out in 2016: From Up River, For One Night Only. It’s this great novel about these small town kids who dream big and… that’s it. Really evocative for those of us who grew up in the era. I love, love, love Michael V Smith’s latest book, My Body is Yours. Beautiful work about the Nineties and how we wanted to start a revolution with sex. At Authors 4 Indies I met this great illustrator, Rebecca Chaperon, who has a whole book of macabre girl paintings, Eerie Dearies. And I recently heard Rachel Rose read some new poetry: superb, as ever.

16 - What would you like to do that you haven't yet done?
I’d like to spend extended periods in more countries. I’ve lived plenty of places, but there’s a lot more out there. The trouble is I love Vancouver too much to leave.

17 - If you could pick any other occupation to attempt, what would it be? Or, alternately, what do you think you would have ended up doing had you not been a writer?
I teach, which I enjoy immensely, so I guess that’s the easy answer. I like writing so much that journalism seemed like the thing to do, until after the Montreal massacre---I saw up close what reporters did to get the stories from victims’ families. I’d love to be in the courtroom, although of course I’d like to be a judge, not a lawyer---all that deciding. I’m always a little jealous of anyone doing medical stuff.

18 - What made you write, as opposed to doing something else?
It was never even a question. My mother wrote, and we had hundreds of science-fiction paperbacks lining the walls. And when I was six, we got an IBM Selectric typewriter, and I got to use it. Goodbye cursive.

And I saw The Philadelphia Story on a plane. Which is a really shitty way to see a great film. All that fantastic clipped dialogue through a pair of two-dollar headphones that keep falling out, under the roar of jet engines.

20 - What are you currently working on?
I’m working on a kind of Rhodes Scholar by day/lesbian sadomasochist by night novel called My Education. Draft seven, here we come.