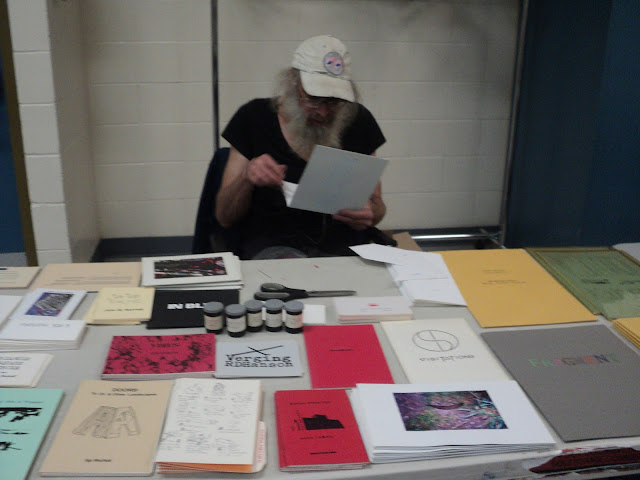 [photo of jwcurry, sewing more copies of bpNichol's HOLIDAY] Another fair, come and gone. In the fall, we celebrate nineteen years of our semi-annual ottawa small press book fair. How did we get here? How did I get here? My thanks to everyone who participated!

And can you believe it? Amanda Earl has already posted her post-fair report, here.

Toronto ON: Former Ottawa poet Suzannah Showler has been getting a lot of attention lately, between being announced as a finalist for the 2013 RBC Bronwen Wallace Award for Emerging Writers from the Writers’ Trust of Canada, and being included in The Walrus’ list of “the six best writers you’ve never heard of,” as well as the fact that she has a first trade poetry collection out next year with ECW Press. Bardia Sinaee’s Odourless Press [see his recent 12 or 20 (small press) questions here] has just released her small chapbook, Sucks To Be You and other true taunts (May 2013) [see Michael Dennis’ recent review of same here], a five-poem collection of short, polished lyrics. Conversational in tone, these short pieces have taunt-titles such as “I know you are, but what am I?,” “takes one to know one” and “stop hitting yourself.” The taunting-aggression is appealing and bring an intriguing punch to the writing.

why don’t you go home and cry about it?

I have a feeling about a very slow
apocalypse where we are all drawn
back to our hometowns by something
like a magnet that attracts whatever
inside us is most mediocre and true.
So, when the world begins to end,
if you have a minute, please promise
to tell me more about all the other
people you’ve fucked, how they
had skin almost too firm to register
touch, how their pussies were basically
luminescent, and, in particular, I’d like
to know in what order their clothes
came off when they undressed,
because I’ll need something
to think about when I am caught,
post-apocalyptically, in Ottawa,
Ontario, the capital of Canada,
where my parents still live.

Their other spring title is Matthew Walsh’s CLOUDPEOPLE (May 2013). Another former Ottawa poet, Walsh’s CLOUDPEOPLE contains a lyric looseness that occasionally falters, and could use a bit of tightening, although the poem “I’m Condoleezza Rice” contains a playfulness and humour that makes up for the occasional awkward tweak. As he writes in his rhythmic-tone, “I’m Condoleezza Rice / but I can’t play piano / I can’t play the blues but I can / tell a good riddle.” The leaps between lines and their disconnect, when done well, are impressive, yet he loses control when poems are stretched too far, too long. One gets the impression that Walsh is still working through an apprenticeship of what works in his writing, and how best to compose each piece. One of the strongest pieces in this collection is the nine-poem sequence “Cloud Grape,” which manages to contain the disconnect in a way that brings a spark to each leap. The first section of the poem reads:

Just ignore me. I’m feeling
better now. It’s just been a while
since I turned your ear. I’m Lying
in Sorauren Park watching a woman
count the rings
on a tree stump. I want
to lean in
and make an inquiry. How long
it was married to the earth?
I see her again in Mimico contemplating
a pair of XXL Scooby Doo underwear
writing in her notepad. Talking to a pigeon. People
can be a real menace.

Ottawa ON: Between his chapbook through The Olive Reading Series, and two chapbooks (one, two) with above/ground press, Excerpts from Impossible Books: The Apt. 9 Installment (June 2013) is the fourth published section of Ottawa poet Stephen Brockwell’s work-in-progress, scheduled for trade publication sometime over the next year from Toronto’s Mansfield Press. Edited, published and hand-sewn by Cameron Anstee, Apt. 9 Press has become one of the more engaged micro presses in the country, producing some of the most enviable books I’ve seen in a long time. Launched with two further spring titles by Apt. 9 Press—by Jeff Blackman and Christine McNair—to a packed house at Raw Sugar Café in Ottawa’s Chinatown, the eight poems in Excerpts from Impossible Books: The Apt. 9 Installment have a slightly different feel from previously-published works in the same series, not just for the difference in poem-length (ranging from the short quirk to the longer lyric). Engaging with an ongoing exploration of voice, science, mathematics and the formal lyric, the poems in this collection seem less a series of fragments of a larger project than a handful of poems that encapsulate the project as a whole. Is this a shift in his writing generally, or simply the focused-end of a lengthy project? Either way, I eagerly await the finished collection.

from The Lightning Harvest
Designs for a Practical Capacitor

A Leyden jar the size of the moon
on the horizon in Arizona, or

a capacitor of concrete
from all the floors of Abraj Al Bait.

A paper condenser of the recycled
pages of every printed book, or

the Library of Congress, each page
of 29 million volumes taking a small charge.