The journey of the rock is never ended. In every tiny part of any living thing are materials that once were rock that turned to soil. These minerals are drawn out of the soil by plant roots and the plant used them to build leaves, stems, flowers and fruits. Plants are eaten by animals. In our blood is iron from plants that draw it out of the soil. Your teeth and bones were once coral. The water you drink has been in clouds over the mountains of Asia and in waterfalls of Africa. The air you breathe has swirled thru places of the earth that no one has ever seen. Every bit of you is a bit of the earth and has been on many strange and wonderful journeys over countless millions of years. (Lorine Niedecker, “Lake Superior Country, Vacation Trip ‘66”)

I’m absolutely fascinated by the new collection-study Lake Superior (Seattle WA/New York NY: Wave Books, 2013), wrapped around the six-page poem of the same name by the late American poet Lorine Niedecker (1903-1970). Perfectly built for study (Hoa Nguyen recently organized a course around the book) Lake Superior includes Niedecker’s poem, as well as her “Lake Superior Country, a journal,” a piece that was written during the same period, even to the point that trace echoes, as well as more obvious connections, can be found between the two works.

In blood the minerals
of the rock

With the addition of an essay by Douglas Crase, “Niedecker and the Evolutional Sublime,” the remainder of the collection exists nearly as an exploration of the time, influences and considerations of the composition of the poem, whether directly or possibly indirectly, including “Three Letters from Lorine Niedecker to CidCorman,” “Excerpts from Back Roads to Far Towns” by Bashō, “’Tour 14A’ from Wisconsin, A Guide to the Badger State” (the note at the end of the piece: “Niedecker worked on this guide for the WPA”), “On a Monument to the Pigeon” by AldoLeopold, “Excerpt from the writings of Pierre Esprit Radisson” and “Excerpt from the writings of Henry Rowe Schoolcraft.” There are some elements of Crase’s piece that are quite stunning, but also just a tad precious in tone, as he opens his “Niedecker and the Evolutional Sublime” with:

Poetry is words. Yet when I think of the Whitman who found he incorporates gneiss, the Stein who says anybody is as their land and air is, the Stevens who locates mythology in stone out of our fields or from under our mountains, then I have to admit that the sublimest American poetry has always read to me as if it would rather restore, or even realize its desire for a wealth outside words, a wealth that is wild outside the human voice. That is what I always liked about it. It is what I liked at once about Lorine Niedecker’s “Lake Superior,” that spare ferropastoral of a poem in honor of the rock and mineral wealth

Iron the common element of earth

for which the human species is just another mode of transport.

Over some ninety pages of material surrounding a six page poem, this is an exceptional study of an important poem by an important American poet. Why can’t more studies such as these exist? The only frustration comes from the fact that Vancouver critic Jenny Penberthy’s (a noted Niedecker scholar) essay on the poem, “Writing Lake Superior,” isn’t included in the selection, a piece that actually introduced me to the short piece by Niedecker, although the acknowledgments do include this: “We would like to thank Jenny Penberthy for all of her work, and for Lorine Niedecker: Woman and Poet, which was an inspiration for this book.” To read through Penberthy’s original essay (which, fortunately, is available online), many of the components of the book are referenced. As Penberthy’s piece opens:

Lorine Niedecker’s “Lake Superior”—the first long poem she would see into print—occupies five pages with a total of 395 words. Her research and preparation for the poem, the punning and aptly named “millenium1 of notes for my magma opus” (Niedecker to Corman, August 20, 1966), numbers 260 mostly typed, single—spaced pages. Tens of thousands of words.

In late July 1966 Lorine Niedecker and Al Millen set off in their Buick on a week-long journey around Lake Superior, “by way of L. Michigan shore to Mackinaw Country and Sault Ste. Marie…along the Ontario shore and down the Minn. side” (Niedecker to Corman, July 12, 1966). The impulse to research the “magma opus,” her epic of rocks and minerals (Davie 73), can be traced most directly to the previous summer’s road trip through the Black Hills of South Dakota. Niedecker remarked to Corman on the “[r]eddish gravel beside the paved roads and in a couple of places a pale gold driveway—covering with gold bits or yellow diamond sparkles all thru it!” and “[t]he big rock structures in the hills…merely greyish or pinkish or yellowish depending on the time of day” (July 28, 1965).

Still, the one thing I wondered: why is an editor not credited for such a collection? Lake Superior provides a rare glimpse on how a poem might have been made, and the works surrounding such a piece. Niedecker clearly had clear knowledge of geology, ecology and other natural studies, something she researched vigorously, a research that appears far deeper, ongoing and direct than, say, Don McKay’s poetic studies over the past decade in stone and geologic time. What this collection provides through the collage of pieces is the “story” of the short poem. We get to see the influences, the conversations, notes and journals, tracking what might otherwise be too ephemeral to follow. 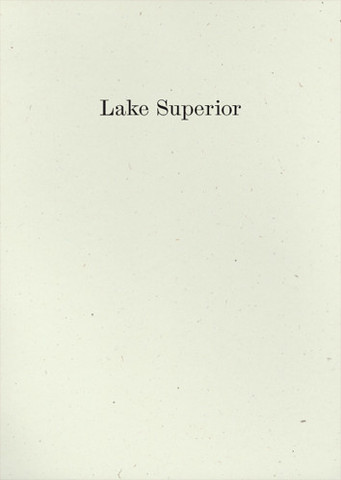