I CAN ALMOST SEE THE CLOUDS OF DUST

If they run, startled
I’ll imagine bigger clouds of dust

They’re clean, they walk on a city street
like a group of men in the city

A herd of cattle walks on a city road
They come one by one
They pass by me (Yu Xiang; translated from the Chinese by Fiona Sze-Lorrain) 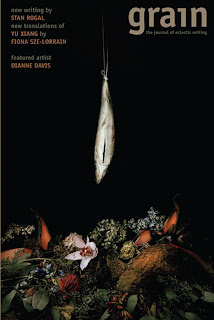 Every so often I become more aware of the fact that so many literary journals in this country are deeply in love with metaphor-driven lyric narrative poems. Why is that? There are so many other varieties of writing currently being composed and explored in various corners of Canada, why do so many journals simply focus their attentions upon one particular strain? Perhaps I’ve become wistful lately, recalling just how much I enjoyed the days of Toronto’s late, lamented Queen Street Quarterly, for example. In this issue of Saskatoon’s Grain magazine, the summer 2012 issue subtitled “unstrung,” there isn’t much that really strikes out at me, with a few exceptions. The meditative poems of Yu Xiang, as translated from the Chinese by Fiona Sze-Lorrain, are quite lovely, and her first major collection in English translation, I Can Almost See the Clouds of Dust (Zephyr Press) is forthcoming. Still, some other things intrigue, such as some of the lines by Christopher Lee Miles, but some of the finest and most intriguing have to come from Kirya Marchand, in her striking five-part poem “FIVE WAYS I HAVE FOUND OF TOUCHING MY OWN BODY,” that includes:

III. CLICKING MY TONGUE-RING ACROSS MY TEETH

I talk and my talking counts time
caught

in the ossuary,
I walk through like a monk
would.

Otherwise, I love that the “Haiku Horoscopes” by Winnipeg’s “Jonathan Ball, Registered Fraud” is a regular occurrence, striking and odd enough to be one of the highlights of every issue.

It’s always good to see new fiction by Toronto writer Stan Rogal, as well as by Victoria writer Oscar Martens who, some two decades ago, was living in Ottawa and hanging around The TREE Reading Series. The opening of his story “No Call Too Small” reads: