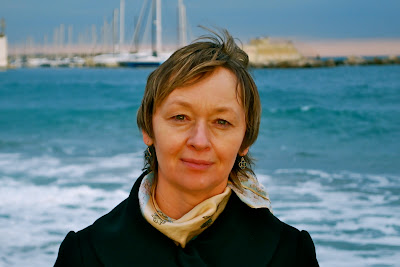 Deanna Young’s second book of poems, Drunkard’s Path, was published by Gaspeareau Press in 2001. Her writing has appeared in numerous journals including The Malahat Review and Arc and been aired on CBC radio. She's currently completing her third manuscript, Knowledge from a Previous Life. Born in Lucan, Ontario, she now lives in Ottawa. She recently launched the chapbook Mediterraneo (above/ground press), a collection of three short poems.

1 - How did your first book change your life? How does your most recent work compare to your previous? How does it feel different?
My first book was published when I was only twenty and a student at McGill University. It was a collection of poems called The Still Before a Storm (Moonstone Press, 1984). At the time, it seemed like an incredible opportunity and confirmation, but because the manuscript was published exactly as I submitted it—i.e., utterly unedited by the publisher—and therefore retained all of its raw immaturity, I ended up feeling an almost paralyzing self-doubt for years after. My next book came 17 years later and felt like a first book even though it officially wasn’t. Drunkard’s Path (Gaspereau Press, 2001) gave me that “first book” feeling of pride and achievement. This time, publisher Andrew Steeves certainly had his input, and the book benefited. My recent poems circle much of the same ground as my earlier poems; my preoccupations are the same. What feels different now is I’ve had some life experience, which includes three kids, and am not quite so vulnerable to the bullying insecurities of youth.

2 - How did you come to poetry first, as opposed to, say, fiction or non-fiction?
Lack of patience combined with an enormous capacity to obsess over details? I adore the way words and individual letters look, and sound, and poetry gives space to those obsessions. Poems can be seductive in their brevity. You think, well, what could it hurt to try writing a little poem? It’s not going to be as big a commitment as a short story, say. And then you’re in, committed, hooked.

3 - How long does it take to start any particular writing project? Does your writing initially come quickly, or is it a slow process? Do first drafts appear looking close to their final shape, or does your work come out of copious notes?
The initiation stage for poems varies. First drafts usually come at one rush (driven by the inspiration, I guess), then take a while to develop through countless other drafts. (It’s great that this operation is, for me, now largely paperless.) Occasionally a freak appears and the poem comes together in a few days—or less, as with “The Yard” in Drunkard’s Path. Notes are not a huge part of my process for poems, but of course play a role when I’m writing fiction and non-fiction, which I’ve done a bit of over the years.

4 - Where does a poem usually begin for you? Are you an author of short pieces that end up combining into a larger project, or are you working on a "book" from the very beginning?
Poems begin with a compelling thought or feeling. I hear/see/think something that wakes me up, with its beauty or horribleness, and I rush to capture it in a net of words. After that it’s drafts on the laptop. In terms of poetry, I’m usually working on individual poems for some time before planning the book they’ll fit into. To be honest, I’m wary of the pre-conceived book of connected poems, and even the sequence. Such endeavours can easily become forced. (On this note, Phil Hall’s essay-poem “The Bad Sequence,” in his new volume Killdeer, is instructive—or cautionary.) There are of course books that succeed, and Ottawa poet Nadine McInnis’s Two Hemispheres is one of them. I just reread it and was captivated for the entire read!

5 - Are public readings part of or counter to your creative process? Are you the sort of writer who enjoys doing readings?
I enjoy doing readings. For me, they’re about bringing what you’ve been working on in isolation to other human beings, finally communicating en direct. (The idea of someone sitting alone, reading a poem I’ve written and getting something out of it is appealing too.)

6 - Do you have any theoretical concerns behind your writing? What kinds of questions are you trying to answer with your work? What do you even think the current questions are?
I have no theoretical concerns behind my writing and I don’t usually care for poetry that is theory-driven. The only questions I’m trying to answer with my writing are along the lines of: How did that feel? What was really going on there? Why does it matter? Even as I say this, though, I’m questioning myself. Maybe my theoretical concerns are so familiar I don’t even recognize them anymore. I’m just trying to a write a poem that will matter to someone—to me or to someone else. I think. I don’t know.

7 – What do you see the current role of the writer being in larger culture? Does s/he even have one? What do you think the role of the writer should be?
To tell the truth—whether it takes the form of metaphor, symbolism, satire, etc. To entertain. To inspire self-reflection and insight. To keep the memory for future generations; or in case the world ends, we all die, and aliens or other intelligent beings come to mine our artifacts and find out what we did right and wrong—what made us beautiful and what destroyed us.

8 - Do you find the process of working with an outside editor difficult or essential (or both)?
Both, but mostly essential. You have to have the right editor for you, though. If you do, the final product will be so much better. The ideal editor is a proponent of tough love.

9 - What is the best piece of advice you've heard (not necessarily given to you directly)?
Don’t judge another person until you’ve walked a mile in their shoes. Or did you mean advice about writing?

10 - How easy has it been for you to move between genres (poetry to critical prose)? What do you see as the appeal?
I’ve done only a little prose—writing for radio, personal essays, the odd review—although I hope to do more in the next year. It’s a good shake-up. I think it’s healthy to take breaks from writing poetry, whether it’s to write something else or just to live. For me, when the time is right it’s a natural shift.

11 - What kind of writing routine do you tend to keep, or do you even have one? How does a typical day (for you) begin?
Routine is crucial for me, but what the routine is depends on whether or not I’m working at a day job, as I have been full-time for the last four years. In this context, the only time for writing is evenings (when I’m tired) and weekends (when I also want to be involved in family stuff and have chores to do). My ideal scenario is to work from first thing in the morning (having not seen or spoken to another person, which does not happen unless I’m away on a retreat) until mid- or late afternoon—just like a day-job. I’m at my most intuitive and energetic in the morning. I’m taking a leave of absence from my job as an editor, starting soon, and so that will be my routine. Can’t wait.

12 - When your writing gets stalled, where do you turn or return for (for lack of a better word) inspiration?
I go outside to walk or garden. I bake or rearrange furniture. I engage in the physical world. While I’m doing something else, the solutions are percolating inside. It takes the pressure off.

13 - What fragrance reminds you of home?
Outdoor smells. Lilacs in June. A mown lawn. Manure on fields.

14 - David W. McFadden once said that books come from books, but are there any other forms that influence your work, whether nature, music, science or visual art?
Nature, absolutely. The seasons. I lived in Trinidad for three years, not long ago, and wrote little during that time. I tried, but the consistently gorgeous weather left me cold creatively. I missed the Canadian seasons and lost my creative bearings! So I hiked in the jungle and played tennis instead.

Also, dreams, conversations. This is where my poems often come from.

Not visual art or music—although I’m mad about art and if I won the lottery would spend buckets on paintings, sculpture, etc. I might reference either type of work in a poem, but one of my pet peeves is poems about famous (or not-so-famous) paintings and orchestral pieces. Some people will dislike me for that comment.

15 - What other writers or writings are important for your work, or simply your life outside of your work?
Some writers and writings that have meant a lot to me are, in no particular order, Alice Munro (well, she is the first), Sharon Olds, Jack Gilbert, Rumi, Franz Wright, Charles Simic; Eavan Boland’s Object Lessons, Mary Oliver’s A Poetry Handbook; Walt Whitman’s “Song of Myself,” Beowulf; John Steffler’s The Grey Islands and That Night We Were Ravenous, Mary Dalton’s Merrybegot.

16 - What would you like to do that you haven't yet done?
Writing wise: write a book of creative non-fiction. Otherwise: make a coming-of-age movie with a bunch of friends. (I thought of this just now and it sounds like a lot of fun.)

17 - If you could pick any other occupation to attempt, what would it be? Or, alternately, what do you think you would have ended up doing had you not been a writer?
Oh, so many possibilities. I would want to host a radio show like CBC’s Morning Side (remember that?) or Tapestry. I’ve always been drawn to radio. As a student at McGill in the ‘80’s, I hosted a weekly music show, and I’ve done a bit of freelance work for CBC. After a cottage by the seaside, one of my favourite places to be is in a sound studio. The quality of silence is breathtaking. Otherwise, I’d farm, which was my grandparents’ life and the family business for generations before.

18 - What made you write, as opposed to doing something else?
A creative sensibility? Idealism? Aversion to bullshit. Impracticality. I saw a button the other day that said, “Fight Truth Decay.” It was canary yellow with bold, black type. If I wore buttons, I would get one.

20 - What are you currently working on?
I’m completing my third book-length poetry manuscript. I’m looking for a publisher too.