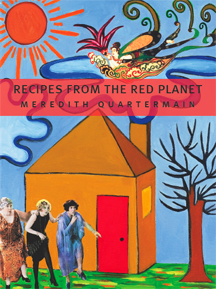 The narratives that make up Vancouver writer Meredith Quartermain's Recipes from the Red Planet (Toronto ON: BookThug, 2010), exist as electric and eccentric prose-poems, pushing deeper against the blur between forms than much of the more poem-specific works of her previous trade collections. The pieces in Recipes from the Red Planet seem to exist as a sequence of striking, nimble texts, employing shifts amid the blur between poems and short stories in lovely, errant prose. Her prose-poems begin from a foundation of uncertainty and the possibility of all things, exploring their ways further out. These are poems that know far more than you do, and manage the strangest and most logical connections through their magnificent range. After watching Quartermain map out her archives of language through books such as Matter (BookThug, 2008), The Eye-Shift of Surface (Greenboathouse Books, 2003) and Spatial Relations (Diaeresis, 2001) to mapping the archives of her geography, strolling her immediate up and down west coast of Nightmarker (NeWest Press, 2008) and Vancouver Walking (NeWest Press, 2005), Recipes from the Red Planet reads as a more fluid continuation of A Thousand Mornings (Nomados, 2002), broadening her scope entirely. Produced as BookThug's "Department of Narrative Studies No. 4," accompanied by a striking series of graphics by New York City artist Susan Bee, this new work maps out an archive of something far deeper and abstract than Quartermain's previous writing, and something far more difficult to name. Even her geographies shift, as in the piece "Dear Post-Land," possibly referring her Ontario origins behind her current Vancouver locale, starting:


I'm from Ontario but where am I addressed to? and where's Ontario from? Can it return there with address unknown? If Ontario goes back where it came from, where will I be? Can I still write to you from there?