today is my fifty-first birthday, 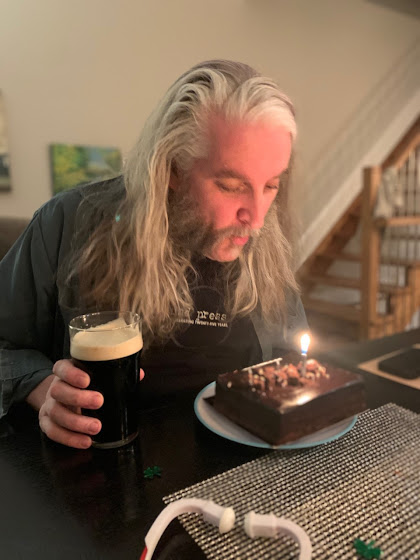 My second annual lockdown birthday. My second annual no-party birthday. When might we hold parties again? My entire fifties-to-date trapped in lockdown. Does that suggest that I might still be, somehow, in my forties? Does lockdown simply skip over age? I might move immediately from forty-nine to fifty-three, or whatever. Most else is on hold, why not that?

For the first time, this is a birthday I’m not feeling great about; I usually have a great big birthday party, having hosted my own since the late 1990s (who has time to wait for someone else to organize it? see also: forty-nine, forty-eight, etc), so this one doesn’t have the same excitement or run-up that other birthdays have had, although I have already received a lovely card from birth mother, and mother-in-law gifted a subscription to The Paris Review, which is pretty cool. Every couple of years I pick up a copy, more for the interviews than anything else (the Robert Haas one, where he speaks of his partner’s work being more interesting than his was pretty entertaining). A few days ago, mother in law even assisted with some fact-checking for a short story I’d been working on; I had a character in Winnipeg as a late teen, and, realizing this character of similar vintage to mother in law, who also lived in Winnipeg during that same period, I had a couple of facts I needed verifying: would this character have been in Assiniboine Park? etc. She did catch a couple of things, such as the fact that The Forks hadn’t market stalls until 1989, which didn’t work at all for the story, and Central Park made more sense for the folk I was writing, so I had to shift those references. I suppose my telling her that the story, once done, I’d sent off to The Paris Review (I was clearly feeling ambitious that day), prompted her to ask Christine if a subscription would be a good idea. I would say that it was. 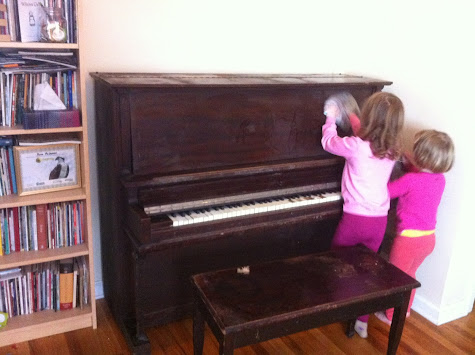 Over the years, this birthday post has evolved into a kind of annual assessment of the months since the prior one, and what does one say about the year we’ve had? All in the same storm, but not in the same boat. Not by a long shot, I know. A year ago yesterday was my first meeting with birth mother. On May 1st, my father died, some fifteen months after his original ALS diagnosis. Joe Blades, RM Vaughan and Michael Dennis. In December, I had both my cataract surgeries, some nine months delayed (making me unable to drive for at least five months). The weeks and the months leading up to those surgeries far more blind than I’d wished to think about, banging about the house, or covering one eye to even read my computer screen. Now, able to set aside the glasses I’ve been wearing since thirty-three. I have super eyes.

Super eyes, and the bones of the homestead, which my sister now owns, rented out to new tenant. Our Alta Vista house now holding what once sat on the farm, including family bible, boxes of paper and photo archive, and the piano, previously moved from my great-grandparents house in Kemptville, Ontario to the homestead in 1976, so I could begin to take lessons. Items shift their context in new spaces, and become something more, something else. My late mother’s teacup.

And yesterday, seeing a Toronto Star (blocked by paywall, of course) article float by on my social media: apparently I’m a day younger than email?

A year in lockdown. And my birthday poem for this year appears today, I’ve been told, in the second issue of the rejuvenated online mouse eggs. Fifty-one: I am feeling a low amount of enthusiasm. Do you remember the cake Christine ordered for me last year? And then the CBC Radio interview I did a couple of days ago, complaining about the Ontario government pushing school boards to confirm students turned into this article, in which I am quoted. 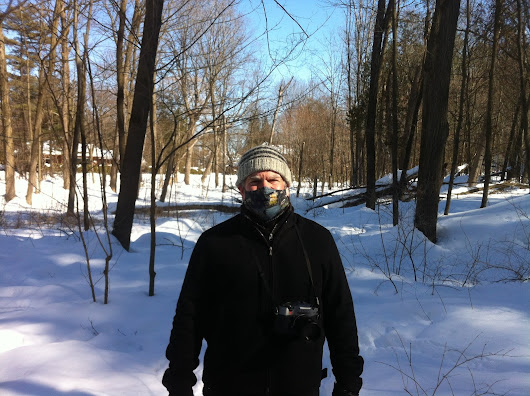 I saw my pal Stephen Brockwell last weekend; we went for a walk. He took me into the woods for some reason. I don’t think I’d seen him since, what, October? Bits of summer and fall, when he would come by for socially-distant backyard visits (one of the benefits of our having a yard). Otherwise, our winter has been very quiet. Where is everyone? What is happening?

Although some twelve hundred letters written and sent since lock-down began. I’m still receiving a five or six percent letter-response rate, which might be for the best, given the potential of being overwhelmed. I’m struck by the number of responses I receive that include the admission that they haven’t actually written a letter in, what, years? And now I’m in regular correspondence with more than a couple of folk that I’m used to seeing in person, as well as others that I hadn’t been much in touch with prior to this. We seek out our connections in whatever ways that we can, I suppose. 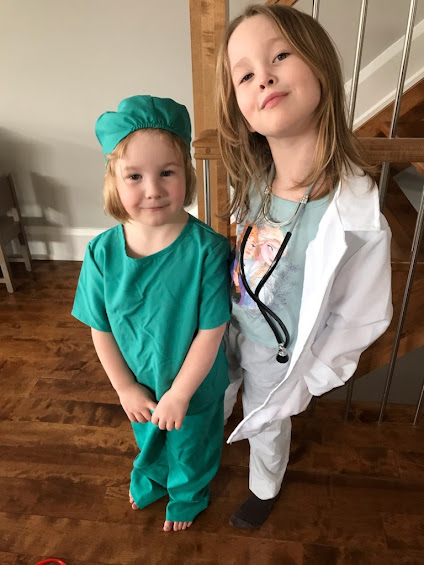 On Friday afternoon we dropped our wee monsters off at mother in law’s for an overnight, where we collected them last night, as part of dinner; they did a sleepover there the prior Saturday, also, their first non-us in-person interactions in four long months.

I know we’re lucky in so many ways, that Christine’s work is flexible enough to allow her to work from home, especially given she’s high risk, and the wee monsters were already fairly close, but this year might have brought them far closer (which also include the inevitable conflicts between them, most of which have been manageable). We’ve two small people in a house with a fenced-in yard, and the young ladies do get along rather well. Even were Christine not high risk, the idea of sending our wee children into in-person school with masks and social distancing I would have thought too much; they’re too little to have to suffer that kind of stress, let alone any potential infection they could have brought home. We take turns lifeguarding the young ladies in their e-learnings, while both pretending we’re working full-time (which we mostly are, actually).

My prior year has been, predominantly, just putting my head down and pushing through as much work as possible (not my first time in doing such, really; and I’ve the advantage of working from home now for some thirty years). Last spring I pushed through what became my manuscript of pandemic essays, “essays in the face of uncertainties,” deciding that if I was to be distracted from work due to crisis, why not make crisis the work? And I had already, pre-covid, put a poetry manuscript, “Book of Magazine Verse,” to bed, as well as my collection of short stories, “On Beauty.” Since I had to finish off my pandemic essays (after three months, the subject matter of the project had begun to exhaust), I ended up poking at numerous short stories, but also started a new novel in July, which furthers a couple of threads from the short story manuscript (which itself furthers some threads from one of my previous novels). Admittedly, I got distracted away from the novel last fall, but have been slowly closing off another poetry manuscript from pre-covid times, as well as poking at the beginnings of what follows “Book of Magazine Verse”—a manuscript titled “the book of sentences”—and another handful of short stories. I think I’ve had enough of my own small or medium-sized crises over the years that I’ve learned to simply push through the difficulties through work, as a strange combination of process and distraction, so I’ve been able to get a great deal of work done through all of this. Blame my Protestant work-ethic, I suppose. My stubbornness.

Mother in law has returned to our bubble temporarily, and for the first time since mid-December, having left brother in law’s bubble (he and his family are moving to the UK soonish, so she’s been focusing on them; which I get, but it still left us solo for a long stretch of weeks). Last Saturday, it was good for Christine and I to have a nice quiet dinner, and an evening in the living room just hanging out talking, without any teevee or child or whatever distraction. I don’t even know the last time that happened! Do I even wish to attempt to figure that out?