This is a work of the imagination.
This is a work of fiction, weaving fact in with the fiction,
merging subject-voice with object-voice, the “I” of the author,
submerged, poet-persona: N—
who loses her aunt and uncle in the bombing of an airplane: Air India Flight 182.

This is a sequence of elegies. This is an essay of fragments:
a child’s battered shoe, a widow’s lament—

This is a lament for children, dead, and dead again in representation. Released.
This is a series of transgressions: to name other people’s dead, to imagine them.
This is a dirge for the world. This is a tall tale. This is saga, for a nation.
This is about lies. This is about truth.

Another version of this introduction exists.
It has been redacted. 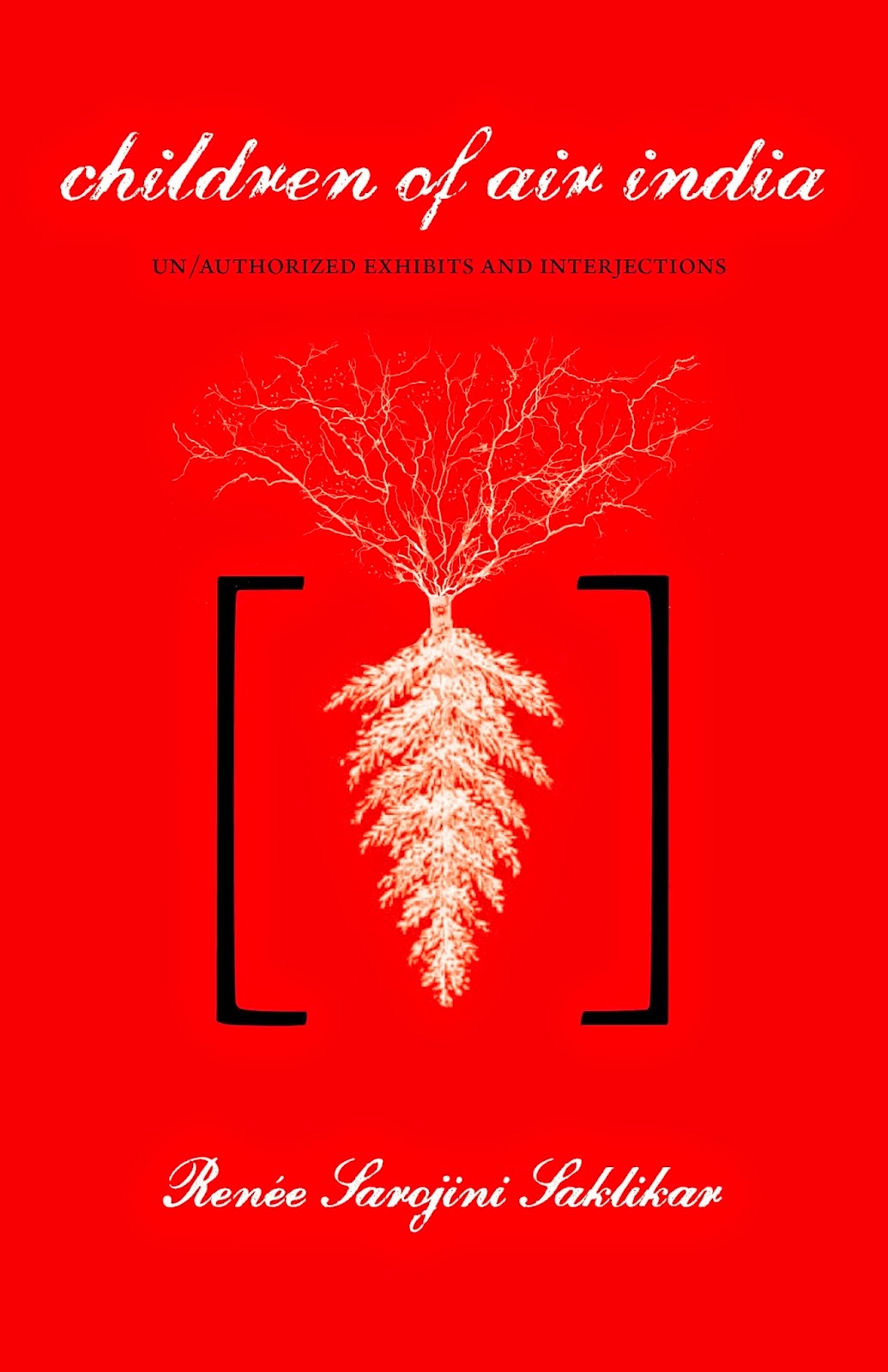 And so opens Vancouver poet Renée Sarojini Saklikar’s first poetry collection, children of air india: un/authorized exhibits and interjections (Gibsons BC: Nighwood Editions, 2013), recent winner of the 2014 Canadian Authors Association Award for Poetry. children of air india: un/authorized exhibits and interjections is an investigative book-length study into the facts and fractures of what has been referred to as “Canada’s worst mass murder”—the bombing of Air India Flight 182 on June 23, 1985 that killed 329 people, including 82 children. Working from a vast archive, from newspaper reports to personal stories, Saklikar’s investigation through the material left behind and generated by such an event to create a rich and complex tapestry of grief, absence, rage, incomprehension, compassion and all the internal and external systems that surrounded the trajedy, including the “Commission of Inquiry into the Investigation of the Bombing of Air India Flight 182,” which wasn’t released until 2010, and the subsequent trial and acquittal of the accused: “there is not reconciliation. There is plausible and implausible. / Catastrophic and unreasonable, / Eighty-two children under the age of thirteen. There is time-consuming and / inconvenient. / There is manual and reasonably balanced. There are costs.” (“from the archive, the weight—”). Throughout the collection, poems exist as examinations of what remains, composed as a sequence of autopsies, archaeological studies, explorations and regret at such a loss of human life and potential, reported to and by the narrator, described only as “N”:

Informant to N: in the after-time

My name is [redacted] and my mother was [redacted].
I was three months old when my mother died.
I am without memory of my mother. I am not familiar with this record of events.
June 23, 1985 and after.
I get older. I am her only child.

For such a weighty subject matter, Saklikar’s thoughtful questioning works through language as much as it does through subject, managing a playful display of sound and shape, allowing form and function to ebb and flow, strike and slice as required. Saklikar’s book-length investigation of such a tragic event through poetry is reminiscent of other recent titles by Vancouver poets, including Jordan Abel’s The Place of Scraps (Vancouver BC: Talonbooks, 2013) [see my review of such here], Cecily Nicholson’s From the Poplars (Talonbooks, 2014) [see my review of such here] and Mercedes Eng’s Mercenary English (Vancouver BC: CUE Books, 2013) [see my review of such here], each of which explore, engage and challenge a series of dark histories through various experimental poetic forms. As Saklikar writes in the poem “C-A-N-A-D-A: in the after-time, always, there is also the before…”: “each story-bit / a laceration / inside her deep down / secrets / dismembered / one limb after another— / incident as saga, saga as tragedy, / tragedy as occurrence / so what a plane explodes / so what people die, they die every day / in her body, blast and counter blast / (Air India Flight 182) / her story and the stories of other people / interact—a toxin?” As Saklikar, who lost an aunt and uncle in the attack, responded in a recent interview conducted by Daniel Zomparelli for Lemonhound: “My hope for children of air india, which by the way comes to me only now, after the fact of writing it, is that readers/listeners will view it as a site of query, of contemplation: what does it mean to lose someone to murder, on both a micro-level, that is, on a personal level, but also within a macro-context, within a public event.”

Testimony: her name was [redacted]