I read in early morning, preferably in bed. Or I read afternoons in the library, seated in the anonymity of a rustling. Turning the pages, my desk-lamp joining the complicitous glow, I become a member of anonymity. Password carus, lowercase, seat 1030.

Reading in the utopia of airplanes is quite total.

I flew to the British Library to trace Lucretius. I had filled out the paperwork and received the plasticized reader’s identity card. My declared interest was the early translation history of De Rerum Natura in England in the 17th and early-18th centuries. The door handles of the reading rooms were wrapped in soft-grained black leather bound in place with fine stainless steel wire. (“Lastingness: Réage, Lucrèce, Arendt”)

Canadian poet and essayist Lisa Robertson’s Nilling: Prose Essays on Noise, Pornography, The Codex, Melancholy, Lucretius, Folds, Cities and Related Aporias (Toronto ON: BookThug, 2012) is a collection of essays on form and consequences, with threads that extend out of her previous non-fiction work, Occasional Works and Seven Walks from the Office for Soft Architecture (Astoria, OR: Clearcut Press, 2003; Toronto ON: Coach House Books, 2006). As she writes in the essay “Disquiet”:

The constituting gesture of the Western city is expulsion. We rid the bounded site of what we next configure as danger, pollutant, threat to the self-identifying community. The efficiency of the expulsing gesture has demonstrated itself: The means of living are what are extracted or wrested from an elsewhere, and brought apparently cleansed into the agora, in order to the exchanged for the stance and insignia of authority. It interests me to record signs of the failure of this hygiene. However thoroughly policed and legislated such a system is, it is never totalized. Migrants slip through borders, illegal or sub-legal economies proliferate, or the central economy suddenly reveals its own illegality. In spite of dominant intentions, movement doesn’t stop. The city never becomes a static image of its own nostalgia, because some movement will always be indeterminant. Centrally defined limits and products are misused, transgressed. Border practices take place on a deeply layered and concentrated history of related counter-activity. To be in the city is also to be in the ancient habitus of refusal and resistance. Bodies assert their incalculable drives. Noise is made. It is the present. 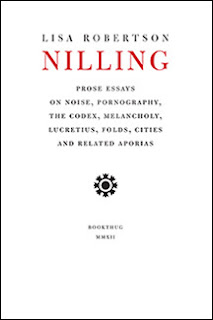 Nilling collects eight essays, most of which were originally composed “accepting various invitations,” including an exhibition catalogue for an art show. The essay “Disquiet,” which is “accompanied by ambient sound records made at the sites of Atget’s documentary photographs of Paris. Each subtitled section of the essay has a corresponding soundscape. These recordings can be accessed on the web at http://www.bookthug.ca/nilling.” Some of the detailed descriptions of library archives and the nature of decoding text is reminiscent of Susan Howe’s writing, as Robertson moves through her own descriptions of marginalia, somehow becoming no longer peripheral, but briefly central to her experience of reading. Robertson’s essays describe an act of reading, deep and complex, through a variety of subjects, and describe that reading, much like visual art, writing or architecture, can’t exist in any way but as response. As her closing line to “7.5 Minute Talk for Eva Hesse” reads: “Form – it’s because there are consequences.”
Posted by rob mclennan at 9:01 AM
Labels: BookThug, Lisa Robertson