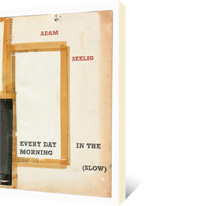 
12 – What, as a publisher, are you most proud of accomplishing? What do you think people have overlooked about your publications? What is your biggest frustration?
The space I've made for certain writers, whose work is now more broadly accepted than it was ten or twenty years ago, is what I'm proudest of. Writers like Lisa Robertson and Terry Glavin come to mind. I'm still working on making Donato Mancini somewhat less obscure. (He's doing a lot more about this than I have been able to.) Peter Culley, George Stanley, but I was hardly their first or first-ish publisher, and they still aren't household names either.
I remember clearly people shaking their heads at my decision to publish Debbie: An Epic, and I remember one of my Ontario sales reps telling me, the year Glavin's This Ragged Place was a GG finalist, about a bookseller who cited it as an example of the irrelevance the GG's had fallen into: "Look, they've shortlisted a writer that nobody's ever heard of!" This was not long after the GGs were moved to the fall, to coincide with big publishers' marketing plans.
I am very proud of our poetry list in general, not just Lisa's work. I think it's become one of the most interesting lists in the country. I am proud of the Transmontanus series, short books about various more-or-less arcane aspects of BC culture & history.
Biggest frustration? Gosh, so many to choose from. I guess my biggest frustration is the pusillanimity of my colleagues, almost all of the Good Germans who are reluctant to risk their meagre positions by either standing up to forces hostile to a healthy literary culture, or by publishing somebody, or something, that hasn't been previously published. There are exceptions. They know who they are. They might not be the people you think of first.
13 – Who were your early publishing models when starting out?
One of the great advantages of being in the first wave of modern Canadian publishing and writing, which I date from approximately centennial year, is that there were no real models; we had to make it all up as we went along. I came into the trade at what I now see as the very tail end of that era, the early 1980s; but I did not, and still do not, have any specific models that I try to emulate.  In any case, concepts like "Penguin" or "New Directions" or even "Coach House" or "Talon" have a completely different meaning than they did a generation ago.


14 – How does New Star work to engage with your immediate literary community, and community at large? What journals or presses do you see New Star in dialogue with? How important do you see those dialogues, those conversations?
Well, publishing is an eminently social act. And terms like "the financial community" have, over the years, blunted my appetite for this particular term. Are the readers of a particular book or writer a "community"? So, on one level, I'm not so much interacting with a literary community, but a community of citizens --- the "at large" (which contradicts the original meaning of community, which is the opposite of "at large"), some of whom identify as readers and some more of whom from time to time read a book, and thus might be interested in what a given writer has to say, a given book has to offer.

There are certainly communities of writers, and KSW would qualify. New Star's poetry list certainly responds to the interests and concerns of that particular community: as an editor and publisher, my reading habits and my taste have been heavily influenced by the various poetics that have been associated with the KSW, or with writers associated with KSW. And that includes the ideas about writing that circulate among other local writing communities that have in their turn influenced the KSW gang: communities in San Francisco / Oakland, in New York, in Buffalo, Philadelphia, even Toronto.

I'm a member of the KSW board, where I don't (have to) do very much. I'm also a member of the board of the People's Co-op Bookstore, where I am somewhat more active. For instance, I have been one of the people working to embed the store more directly in the community by making it a venue for readings, discussions, launches, &c. During the month of November, the People's Co-op hosted the 2010 version of Respondency West, which was itself inspired by the Influency series in Toronto a year or two back.
15 – Do you hold regular or occasional readings or launches? How important do you see public readings and other events?
We organize public launches for most of our books, and within our limitations (Canada Council gives us $1,500 -- $2,000 a year for author tour promotion; our overall annual budget for that sort of thing is around $8,000, which isn't very much) we do our best to help send our writers on the road. It's not lost on me that for many poets, the royalties are a minor consideration and the real payoff might actually be a trip or two to some exotic realm, almost always one of the aforementioned sites of local communities with interesting poetics.
16 – How do you utilize the internet, if at all, to further your goals?
Well, the internet is just the way we talk about things these days. So we try to use it to make sure people know about our books. Obviously it's affecting what we do, just as television affected how radio worked without actually replacing it, and radio before it affected print without actually replacing it.
17 – Do you take submissions? If so, what aren’t you looking for?
Of course, although we do have some barriers in place: for instance, we state that we don't accept unsolicited poetry manuscripts. This has the desired effect of encouraging writers with serious submissions to contact me first. 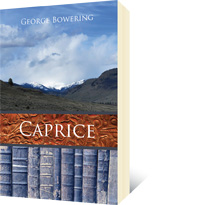 City of Love and Revolution: Vancouver In the Sixties, by Lawrence Aronsen --- special because it's one of the surprisingly few books so far about the sixties, an era whose importance I would argue for.

Sweet England, a novel by Steve Weiner, a tremendous writer living here in Vancouver and whose first two novels were published by big houses that probably lost a shitload of money on them: great art usually NE great commerce, at least at first.

Caprice, the reissue of George Bowering's novel, because we think George is a great writer and there was something wrong about the fact that his great trilogy of BC historical novels was out of print.

And we're currently steeped in the first of our 2011 books, including new ones by Roy Miki and Donato Mancini.