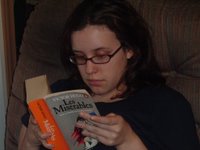 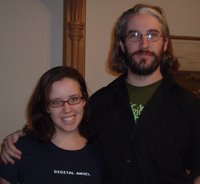 me + my lovely daughter Kate

It’s most of what I’ve been doing since coming out to my parents farm on December 23rd, just five miles west of Maxville, Ontario (home of the largest Highland Games in North America); that, and posting bits I wrote before I left Ottawa. Spending time with parents on the homestead, and my sister, her partner Corey and their daughter Emma (who just turned 2 years old; Kate and I take turns teaching her strange phrases to repeat very loudly) who live in the log house across the road (we’ve been on the same road since 1845). The poet Nicholas Lea is about two miles away on Norman Drive with his family, doing whatever it is they do.

I spent much of Christmas Eve reading a badly written book about Paul Chartier, who tried, unsuccessfully, to blow up Canada’s own Parliament in May 1966 (our own Guy Fawkes!'; see the related blog entry here). All he managed to do was accidentally kill himself, but only because he had no idea what he was doing. Reading the book, it’s actually rather frightening how close he came, failing only due to his own incompetence. The book, The Mad Bomber of Parliament (Nepean ON: Borealis Books, 2005) by James Fontana, seems to be well-researched enough, and Fontana was even on the front lines as a young lawyer (assistant Crown prosecutor in Ottawa), but really isn’t that well-written or compelling, despite the material, and presumes that the reader knows as many facts as the author does, such as mentioning the bus station on Albert Street (someone should tell him that it has long since moved; I have no recollection of it ever being there. Isn’t this something the author should be mentioning?).

Otherwise, I’ve been watching plenty of documentaries (The Real Da Vinci Code and Worst Jobs in History, both hosted by Tony Robinson, who seems to host a multitude of extremely interesting docs through BBC, and was Baldrick on Black Adder...), and episodes I missed of the past few months of Smallville (while waiting impatiently for the summer movie).

Yesterday, I went back to collect my daughter Kate (who turns 15 on January 4th; does that mean I'm an old guy?). We spent today wandering parts of Alexandria and Cornwall, doing nothing in particular (while listening to the mixed CD she made me for Christmas, with songs by Death Cab for Cutie, The Donnas, Air, The Bloodhound Gang, Coldplay and plenty of others; extremely cool). Our usual stops always include the Dairy Queen in Alexandria (I liked the building better, before the fire a few years ago; when on the farm without her, I spend most afternoons in there writing...) and the new/used bookstore on Main Street, where I usually leave handouts and pick up books on Glengarry history (if I can; most of them are bloody expensive). This time around I found The Scottish Pioneers of Upper Canada, 1784-1855: Glengarry and Beyond by (Toronto ON:Natural Heritage Books, 2005). Hopefully they'll be nice enough to send me a review copy if I ask all nice?

We return to Ottawa tomorrow, for whatever it is we do in the Capital. She’s been reading through the books I gave her, including Les Miserables (she requested it; she's actually a huge fan of musicals...) and The Astonishing X-Men: Volume Two, collecting the last six issues of the year long run of The Astonishing X-Men written by Josh Whedon (the guy who invented Buffy[I much preferred the movie], Angel and Firefly; I am very much hoping his run continues). In the kitchen, my father is currently working on his train (a lego-type huge model he got yesterday from Uncle Bob with nearly 1,000 pieces; he’s always been a big fan of puzzles, and other such things you have to figure out; far better than the 1980s, when he was the only one who played with my Rubic’s Cube by taking it apart and putting it back together in the right order, or the 1990s, when he would spend entire winters playing and solving the King’s Quest games, annually for the first three versions).

I was hoping to get a group photo of the whole bunch of us -- parents, sister, etc --but that doesn’t seem to have happened, again (couldn’t get one during the August long weekend either, during my sister’s third annual pig roast). At least something to show season (I'll just have to remember what they look like between now and March, when Kate and I come back here for March Break + my 36th birthday). Once I’m back at my desk, I’ll be producing smarter blog entries in no time. But one wonders, why?
Posted by rob mclennan at 4:51 PM
Labels: Borealis Press, Glengarry, James Fontana, Kate Seguin-McLennan, X-Men

hey, you have comments now?! did you do that?

Rob Have a great New Years...I will look for a chance to buy you a beer or otherwise chat...have a look through "Boomers on the Fly", my chap book, a present for my sister who turned fifty...it is a very self indulgent romp through a few ditties for ageing baby boomers...enjoy!

Great New Year's to you, rob! Glad you're having good times.