Ralph Waldo Emerson, not complimentary: “Thinking is a partial act.”

I am curious about your ideas on the visual.

But I think the way that this material has crept into the current issue is that the visual seems to be able to exist in support of the kind of dense lyric that Partial Zine is supposed to focus on. they are part of the same process as the poems.
whatever procedures are capable of this kind of lyric are also capable of a kind of visual work, and sometimes need to produce that visual work in order to be able to produce the poetry, and maybe aid the poetry by accompanying it in the way that music can have accompaniments.
One might say that an answer is denser than a question 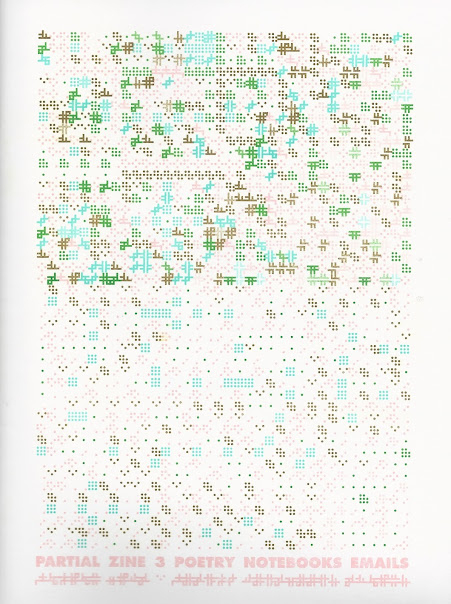 I’m fascinated by the third issue of the Hazelton, British Columbia journal Partial Zine (described as “an offline journal of poetry, notebooks, and emails”), the first issue I’ve seen, produced by Adam Katz (formerly of Toronto; formerly of Buffalo) and Vera Maurina Press. This issue includes an array of some fascinating visual and text work by a range of poets, with only half the names I’m familiar with: Andy Gricevich, Raymond de Borja, reek bell, Ellen Dillon, Chris Macalino, Pansy Wright-Simms, Jordan Abel, Robert Jackson, Sila Katz-Kuperman, Woogee Bae, Ava Hofmann, Kristian Enright, Dennis Teichman, Ted Byrne and Michel Simard. There is something really vibrant, nearly explosive, in the works collected here. The issue opens with nearly a dozen pages by American poet Andy Gricevich (does anyone remember the publications he used to produce as CANNOT EXIST?), an array of il/legibilities he describes in a brief afterword: “Later I started to think of them as ‘songs’ (at least sometimes), where greater legibility=’lyrics’ over the ‘background music’ or harmonies of the other marks. // Still later I started thinking a lot (and still haven’t really followed this out consciously) of illegibility as a sociopolitical issue—rendering ourselves unreadable to state, medical, corporate, social media and technocratic attempts to comprehend and anticipate our desires and needs.” Between dense visuals of collaged images set upon a background of crinkled grey, set as a field of tricks with light, Raymond de Borja includes the short piece “The Given is What Accident Refracts to a Gift,” that reads: “Set where various cities touch without tremor—the timbre of a tear—offered—in the fabric of—to a listening where—when straining for—there—when towards—disambiguation—an attentive ear—understands—that it cannot understand—the impulse towards—what we feel we mean—when saying here.” As part of Woogee Bae’s addendum to her own handwritten piece reads:

the idea circulating in my head kind of frustrated me as I put it to paper, so that’s not what this is.
a rough breakdown of the word “mung” (like mung beans).
my current obsession.
several definitions, different uses of the word throughout history
data manipulation
ruins
here

There is such a wealth of work here, from handwritten to straight text, from visual collage to designed and modified text, all in their own way utilizing the page as field and the text as building-block (the only structures missing might be the physical, modified text itself, a la Kate Siklosi, Gary Barwin, Amanda Earl and Derek Beaulieu, etcetera). This is clearly a journal worth paying attention to. To order copies, check out the link here; to submit (“Special consideration will be given to submissions to Partial Zine 4 that are in some way based on pieces in Partial Zine 3”) email: adam.robert.katz (at) gmail.com