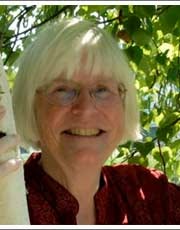 Sad news from Kingston: after an extended illness, Kingston poet Joanne Page has died. She was the author of three poetry collections: The River & The Lake (Quarry Press, 1993), Persuasion for a Mathematician (Pedlar Press, 2003) and Watermarks (Pedlar Press, 2008) [see my short review of such here].

In 2012, while writer-in-residence at Queen's University, poet Phil Hall founded a lecture series in her name.

Her obituary, from The Globe and Mail:

On February 20, 2015, at age 71, Joanne died in the home she loved in Barriefield. Beloved wife of Steve, cherished by Geoff, Ian and Vero, doting 'Grandma Joanie' to Zoe and Elliot and 'Bean' to Anna, loving sister to Patsy (Jim). She will be deeply missed by her extended family and her many good friends. She had a natural talent for friendship, and cemented it with voluminous correspondence both written and verbal. She touched many lives.
A talented painter in her early years, Joanne spread her wings when she and Steve moved to Kingston. For five years she wrote the 'In Other Words' column in the Whig-Standard, dispensing wisdom and common sense on feminist issues of the day. From there she turned to poetry, with 3 published books (the last of which - Watermarks - was nominated for a Trillium Prize). Sadly, the onset of metastatic breast cancer cut short her writing life. Joanne was an active participant in Kingston's literary community, and in 2014 Stan Dragland, delivering the annual Page lecture at Queen's University (a series named in Joanne's honour) celebrated her work and its ongoing contribution to Canadian literature.
We were able to keep Joanne at home until the end thanks to the devoted caregiving of Jean and Ana, and the palliative care-at-home program (Dr. Connidis) Thanks also to Drs. V. Mohr and G. Linn for being anchors for the past 5 years. In lieu of flowers, donations in her name to the Cancer Centre of Southeastern Ontario (through the University Hospitals Kingston Foundation, 55 Rideau Street, Suite 4, Kingston ON K7K 2Z8) would be appreciated.
As per her wishes cremation has taken place, and no funeral service will be held. Her life will be celebrated at an event in the spring.
In care of SIMPLER TIMES CREMATION SERVICE 613-389-7223 /613-382-3683 On-line condolences www.simplertimes.org