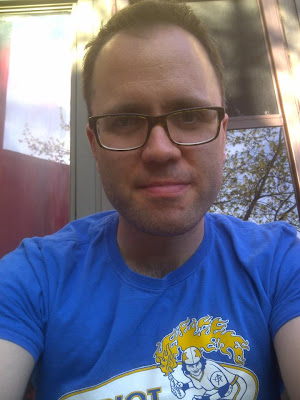 Steven Artelle’s writing has been published n FreeFall, Vallum, Bywords Quarterly Journal, Ottawa Arts Review, and ottawater, as well as forthcoming poems in filling Station and CV2. His series of poems entitled “Chinatown Zodiac” was featured in an exhibit as part of Ottawa's Chinatown Remixed festival in May-June 2013. He recently completed a collection of poems entitled Metropantheon, and his chapbook Four Hundred Rabbits will be published by AngelHousePress in June 2013.

1 - How did your first chapbook change your life? How does your most recent work compare to your previous? How does it feel different?
My first chapbook was a thing called Technoccult, back around 1998. I was really happy with it, and printed about 200 too many copies. Not exactly a life-altering experience---in fact, life took over just after the chapbook, and my writing sort of hibernated for a decade while I was raising kids and paying bills. I’m still raising kids and paying bills, but I started writing again around 2007, and it took about five years before I really found my voice in what I was doing and I started to write with confidence. One of the results is Four Hundred Rabbits, the new chapbook with AngelHousePress. It’s an excerpt from a work in progress, and it definitely has plenty of thematic continuity with my earlier stuff, especially the interest in mythology and divinity intersecting with contemporary culture.

2 - How did you come to poetry first, as opposed to, say, fiction or non-fiction?
When I first started writing, I was mainly interested in writing fiction, especially horror fiction. Some of my favourite writers included Clive Barker and Kathe Koja---writers who had a very metaphysical sensibility and who weren’t shy about their highly aestheticized, even baroque, approach to writing.  Early on, if I wrote any poetry I’d often transfer the lines and images I really liked over into whatever fiction I was working on.  Eventually I became less interested in genre writing, but I never lost that appreciation for energetic phrases, surprising imagery, a grand (and/or ridiculous) metaphysical scale---all natural stuff for the kind of poetry I write.  It’s also a quality in the poets who first really impressed me---Yeats, Layton, Ginsberg, the Romantics (except you, Wordsworth), Elizabethan playwrights. When I came back to writing, I found poetry was the right form for me---I was more interested in what I could do within individual lines, rather than what I could do over the course of a narrative.

3 - How long does it take to start any particular writing project? Does your writing initially come quickly, or is it a slow process? Do first drafts appear looking close to their final shape, or does your work come out of copious notes?
Starting things is like pulling teeth, but once I get a good grip on what I’m actually writing, I can usually yank the entire skeleton out.  Then the skeleton falls apart and I reassemble the bones until they’re a completely different shape when I’m finished. Mostly I write lines and phrases, rather than writing anything resembling a complete poem.  The poem happens when I start to make connections between whatever random pieces I’ve accumulated.  I feel prolific if I produce a couple of finished poems in a month, though for my recent contribution to Ottawa’s Chinatown Remixed festival, I wrote twelve poems in about eight weeks, and was happy with all of them.  When I’m focused, there are bones and teeth everywhere.

4 - Where does a poem usually begin for you? Are you an author of short pieces that end up combining into a larger project, or are you working on a "book" from the very beginning?
Often I’ll know I’ve got a poem in the works when there’s something happening between the title and the first line.  Not that I always have those pieces early on, but I think if there’s no electricity in that space then a poem hasn’t really started yet.  I tend to think in terms of grand unifying schemes, so if I have a tangible concept for an entire book, that helps to direct how and what I write.  My short pieces definitely tend to be part of a larger project, sometimes retroactively.

5 - Are public readings part of or counter to your creative process? Are you the sort of writer who enjoys doing readings?
I think it’s important to test stuff out loud with an audience.  It’s a very different way for folks to encounter your words, and if it works in that live venue then you know you’re doing something right on paper.

6 - Do you have any theoretical concerns behind your writing? What kinds of questions are you trying to answer with your work? What do you even think the current questions are?
For me it always circles back to the nature of cities, encounters with divinity in a secular environment, wrestling with individual identity in a collective culture.  I have a manuscript of poems called Metropantheon, where I’ve tried to overwrite the secular experience of cities in western culture by inventing an urban mythology, rituals, supernatural interventions. It’s about the divine origins and mythic quality of street noise, commuting, parking lots, hotels, sex, death, roller derby. My ongoing work, Four Hundred Rabbits, is about the four hundred Aztec rabbit gods of drunkenness---it’s about what happens to each of those rabbit gods after the collapse of the Aztec civilization, when they stop being gods and just have to live like the rest of us, dealing with heartbreak, mortality, the search for personal fulfillment in a fallen state.  Plenty of heavy metaphysical stuff in my writing, though my aim is almost always celebratory.  Joy is imminent in everything.  Maybe.

7 – What do you see the current role of the writer being in larger culture? Does s/he even have one? What do you think the role of the writer should be?
I think the role of the writer has been the same for as long as writing has existed---we’re scribes.  In a media-driven culture, where the dominant media are visual and aural, it’s still the writer who itemizes, interprets and contextualizes, whether that process results in biography, poetry, or propaganda.  I’m biased, of course, but it’s an ark for all the other arts. Imagine a cosmic cultural game of rock-paper-scissors where it’s dance-music-visual art.  I don’t know which would trump the other, but writing would be the hand.  If you lost one of the three elements, the game would falter; but if you lose the hand, there’s no game at all.

8 - Do you find the process of working with an outside editor difficult or essential (or both)?
It’s essential. The trick is finding an editor whose criticism resonates with what you’re doing.  Two different readers may offer two very different sets of useful feedback.  You need to be open to making changes, but you also need to have enough clarity about your work so that you’re able to edit your writing in a way that makes it even more your own, as opposed to making changes for the sake of making changes.

9 - What is the best piece of advice you've heard (not necessarily given to you directly)?
I have a friend who makes farting noises when she reads something of mine she doesn’t like.  I think that counts as indirect advice.  I find it very useful----when I write, I’m trying to avoid hearing that noise.  Makes me a better writer.

10 - How easy has it been for you to move between genres (poetry to prose)? What do you see as the appeal?
I used to move back and forth quite easily from creative prose to poetry.  Now my creative stuff is exclusively poetry, while prose is for my government day job.  I’m productive on both fronts, but they’re mutually exclusive.

11 - What kind of writing routine do you tend to keep, or do you even have one? How does a typical day (for you) begin?
I have no routine, wish I did.  It comes and goes, and I have no clue how it works.  The only consistent feature is I tend to do a lot of writing on buses.  Buses are underappreciated as literary spaces.  I bet there are more readers on buses than there are in libraries on any given day.  Not sure how many poets there are on buses though.  At least one.

12 - When your writing gets stalled, where do you turn or return for (for lack of a better word) inspiration?
Beck’s beer, the Mahabharata, Hayao Miyazaki movies, Pablo Neruda, Alejandro Jodorowsky comics, melancholy brooding.

13 - What fragrance reminds you of home?
Lilacs.

14 - David W. McFadden once said that books come from books, but are there any other forms that influence your work, whether nature, music, science or visual art?
Music, for sure.  Screw Yeats and Neruda; I want my stuff to sound like David Bowie lyrics.

15 - What other writers or writings are important for your work, or simply your life outside of your work?
I’m a big fan of Archibald Lampman.  One of these days I’ll finish writing his biography, I swear.  I find it hard to read any fiction---I did a PhD in English Literature and it sort of burned out my reading ability.  I love Jeanette Winterson though.  Also a big fan of Pinocchio by Carlo Collodi---don’t get me started on that one.  Otherwise I read a lot of mythology, and stuff like the Shahnameh or Nizami’s Layla and Majnun.

16 - What would you like to do that you haven't yet done?
Visit Easter Island.

17 - If you could pick any other occupation to attempt, what would it be? Or, alternately, what do you think you would have ended up doing had you not been a writer?
Comic book illustrator.  That was my aim until I was about 17, when I realized what I really liked was telling the stories, and drawing was just slowing me down.

18 - What made you write, as opposed to doing something else?
See answer #17.  Fortunately, writing also pays the bills through my day job---see #10.

20 - What are you currently working on?
I’m about 250 rabbits into Four Hundred Rabbits.  Also starting to put together a few poems for a collection I’ll probably call Bone Devotional and Other Hauntings.  Maybe.

[Steven Artelle launches his AngelHousePress chapbook as part of the spring pre-ottawa small press book fair at The Carleton Tavern on Friday, June 14, 2013]