‘The Next Big Thing’ meme-interview with rob mclennan: the blog tour that ran itself 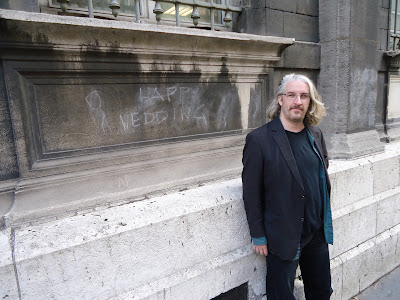 [photo taken in Paris, France in October 2012 by Christine McNair]


Pearl Pirie tagged me in this series of interviews [see her interview here], originally pointing out an interview by Christine Fischer Guy, who writes:

Here are my answers to these questions:

The working title for my current work-in-progress collection of short stories is “On Beauty.” I admit, it’s a title I’m not married to. It was long ago previously called “The Wedding Present,” after a short story that might still be dropped from the whole. For the time being, I’m worrying less about the title of the collection than the stories themselves.


A singular story dates from February 2010 (a story that, depending on my mood, I regularly consider cutting from the collection entirely), but otherwise, the collection had its initial impulse during a trip we made to Toronto for Christmas/Boxing Week, 2011. We were spending a couple of days with my now-wife’s mother, and ended up spending part of December 27th [see my post on such here] on Bloor Street West, attempting a few hours of writing. We had wandered through a since-closed location of Book City and picked up a number of things, including a collection of essays by Milan Kundera, an issue of Believer, an issue of Geist, some back issues of Granta and McSweeney’s. I read the most amazing short story by Miranda July, “Majesty,” which immediately generated the beginning sketches of a short story, “Fourteen things you don’t know about Arturus Booth.”


I eventually had to find her collection of short stories, No one belongs here more than you (Scribner, 2007).


But the ideas themselves: sometimes I start with an idea for a story, sometimes a short scene, sometimes only a title. From the anthology Prince of Stories: the Many Worlds of Neil Gaiman (2008), I adapted the idea of the semi-fictional “A Short Film About John Bolton” (2003) to a semi-fictional story set in 1968, “A short film about my father.” Another story in the collection continues one particular thread from my second novel, Missing Persons (2009), because Amanda Earl, quite literally, asked to know more. I have been attempting another piece to further another thread from the same novel, but the story hasn’t quite figured itself out yet.


There is this story as well, that came out of a conversation, and various thoughts I’ve had on the subject of The Matrix Trilogy.


For this collection, I am very much interested in the collage aspect of accumulating short, nearly stand-alone scene-fragments into a coherent, cohesive narrative of some three pages in length. To articulate the essence of a short story, one does not necessarily need to spell out all the facts.

Johnny Depp. Or the kid who was in that terrible John Carter flick.

Short, sharp and intensely personal; a large book packed into a small space. And yet, this is entirely incomplete. The work should speak for itself.

I’m not really interested in self-publishing this collection, and am represented by no agencies of any sort. So far, my fiction has had but a single trade home, which appears to be no longer an option.


I look with envy at works of fiction published by Anansi and Scribner and McSweeney’s and Douglas & McIntyre (even with their recent financial upheavals).

I’m not sure. I would attempt to ascribe my fiction alongside works by Sheila Heti, Ken Sparling, Jean McKay, Etgar Keret, Lydia Davis and Sarah Manguso, but that might all be vanity. It might be wishful thinking on my part.


I’ve composed a couple of short essays over the past year or so on writing short fiction that discuss some of my goals and concerns, including this blog post, and this short essay over at The Puritan.

Living, and writing. Part of what I’ve been enjoying about working in the realm of short fiction is in watching how various unrelated strands – fragments of real life, memory, information gleaned from television, newspapers, overheard tales, works of non-fiction, etcetera – all manage to wrap themselves into a comprehensive narrative weave. I don’t know where it all comes from, but it somehow make sense in the three-page stretch of prose.


I seek inspiration, at times, from other great works. Lately I’ve been reading Italo Calvino’s Invisible Cities and re-reading Milan Kundera’s The Book of Laughter and Forgetting.

I’m hoping the combination of the collection’s sharp brevity and articulation of deeply personal moments are enough to interest anyone.


As per the rules of this series, here are the five writers I’ve tagged for self-interviews of their own:


Watch for their interviews. Hopefully they’ll be posting over the next little bit.
(and for the sake of gender-balance: over a period of two weeks, I asked a total of ten female writers and five male writers. This is the list of writers who, for whatever reason, said yes.)


Rules of the Next Big Thing


***Answer the ten questions about your current WIP (work in progress)


***Tag five other writers/bloggers and add their links so we can hop over and meet them.


Ten Interview Questions for the Next Big Thing:


What is your working title of your book?


Where did the idea come from for the book?


What genre does your book fall under?


Which actors would you choose to play your characters in a movie rendition?


What is the one-sentence synopsis of your book?


Will your book be self-published or represented by an agency?


How long did it take you to write the first draft of your manuscript?


What other books would you compare this story to within your genre?


Who or what inspired you to write this book?


What else about your book might pique the reader’s interest?


Include the link of who tagged you and this explanation for the people you have tagged.