Nelson Ball, In This Thin Rain 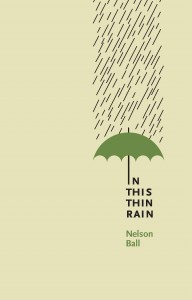 In Paris, Ontario poet Nelson Ball’s poems, every word is essential, and, as editor Stuart Ross said at the recent Ottawa launch of Ball’s newest trade poetry collection In This Thin Rain (Toronto ON: Mansfield Press, 2012), even the slightest edit could make enormous changes. As the back cover attests, “compressed meditations” might be the best way to describe Ball’s compact poems on his immediate, composing pieces on birds, trees, death, rain, colour and bookshelves. Ball began publishing in the 1960s, and was editor/publisher of the infamous Weed/Flower, publishing important early works by William Hawkins, George Bowering, Victor Coleman, Anselm Hollo, bpNichol, John Newlove, Carol Bergé, David W. McFadden and a number of others. As a writer, his own works include publications from 1965 to 1971 produced by Weed/Flower, Ganglia Press and Coach House Press before a gap of twenty years, during which he was involved in other activities, predominantly building up his bookselling business.

Since he returned to publishing in the early 1990s, he has published a small stack of items through presses small and smaller, from the trade collections With Issa: Poems 1964-1971 (ECW Press, 1991), Bird Tracks on Hard Snow (ECW Press, 1994), The Concrete Air (The Mercury Press, 1996), Almost Spring (The Mercury Press, 1999) and At The Edge Of The Frog Pond (The Mercury Press, 2004), as well as numerous smaller publications through Curvd H&z, MindWare, fingerprinting inkoperated, Letters, Rubblestone Press, above/ground press and Laurel Reed Books. There is a packed simplicity to Ball’s poems, more happening in his sharp densities than anyone could have imagined possible, and his influence has been seen since in a number of poet’s works, including the late Toronto poet bpNichol, Ottawa poet/bookseller jwcurry, Toronto poet/publisher Jay MillAr, Mount Pleasant, Ontario poet/publisher Kemeny Babineau and Toronto poet Mark Truscott, each attempting their own sharp densities from Ball, saying as much as possible with the very least.

walking
at The Ponds

For the past decade or so, Ottawa poet Seymour Mayne has been producing a number of what he calls “word sonnets,” attempting a brevity not nearly as clear, dense and elegant as the poems of Nelson Ball, and, much like Montreal poet Leonard Cohen composing eighty verses to boil down to a final four or five, Ball’s compositional process is a lengthy, detailed one of carving, slow and patient and considered.

Part of this book has the added layers of losing both his wife, the artist Barbara Caruso, and his mother during composition, and both women are evident in various shades of the text, such as the small and graceful poem “Colours,” subtitled “thinking of Barbara.” Another part of the collection that intrigues is part of the author’s “Notes and Acknowledgments” at the back, which might shed further light on Ball’s compositional process:

It was interesting, also, that the morning I began to slowly work through Ball’s new collection, an envelope from Quebec poet D.G. Jones arrived in the mail, carrying a few new poems. The comparisons are evident, as both are senior poets known but not as well known as admirers would like, and both poets are revered for their quiet modesty, sharp and sudden line breaks, and the density of their thoughtful, uncomplicated brevity.

don’t quite
know why