A writer's immobility puts the world in motion.
To the extent that we hold our gaze still, things move. Thought, as well, exists only with regard to a halt which is empty. Joë Bousquet wrote, this paralysis has carved a hole in space. To write is to carve that hole in space. Everything takes off from immobility, from the effort of attention that is also a corporeal effort. The tightrope walker has the same problem; he tries to bring together movement and rest, to find perfect equilibrium. The writer's desk is in the mind, a matter of knowing when to stop, of starting out aware that there is no beginning. Writing is a craft of ignorance.
silence is a form 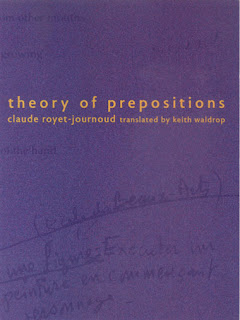 Over the past couple of years, I've been increasingly interested in English translations of French poetry, specifically triggered by, among other things, Norma Cole's anthology Crosscut Universe: Writing on Writing from France (Burning Deck, 2000). Through books such as these, I've been able to explore, further, an interest in prose-forms of poetry and the abstract essay, as well as the possibilities of the sentence. The most recent title to cross my mailbox is Claude Royet-Journoud's the whole of poetry is preposition (trans. Keith Waldrop, Iowa City IO/Paris France: La Presse, 2011). Seventh in their series of “contemporary French poetry in translation,” a series edited by American poet Cole Swensen, the small book exists as an “aphoristic complement to Royet-Journoud's recent book Theory of Prepositions,” another title similarly translated by Waldrop and published through La Presse in 2006.
In five sections—A Craft of Ignorance, [For Emilio Araúxo], To Discriminate, Of the Preposition and Paste-On—the small collection is an extended essay-poem on writing, extending the prose-poem to write out his poetics, as easily as another might compose a letter to a close friend. There is something about French writing I've always admired, in how they, as compared to many English-language writers, have such clarity of poetic, such a clarity of thinking, however abstract it might appear sometimes, in their ongoing works. There is something quite astounding in this unassuming work that needs to be studied, quietly and over a long period.

The whole of poetry is preposition.
It's only with your foot on the core of the tightrope that the narrative unfolds. Before that, there are only fragments of sense and you see nothing of what ties the plot together.
Voice is no help in constructing a framework. It dissolves the whole, makes it fragile, and retains only appearance.
Accidents are essential. They are what give form and readability.
“They speak to the ear, I wish to speak to the memory.” (Joseph Joubert.)