12 or 20 questions: with Peter Jaeger 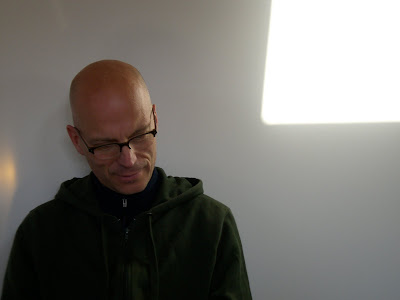 teaches poetry and literary theory at , in . His work includes the poetry collections Power Lawn (Toronto: Coach House, 1999), Eckhart Cars (Cambridge: Salt 2004), Prop (Salt 2007), and Rapid Eye Movement (Hastings: Reality Street 2009), as well as a critical study on contemporary poetics, entitled of Reading TRG: Steve McCaffery, bpNichol, and the Toronto Research Group (Vancouver: Talonbooks 2000). He currently divides his time between London and rural Somerset, where he lives with his family.

I’m not sure if my first book changed my life much at all. I remained a grad student, and continued writing in the various forms that I practiced before publication. My new work seems to be more planned out in advance, while my earliest published work was less planned out from the beginning.

Poetry seemed a way to work through certain processes of thinking that were not available through more conventional narrative patterns.

I usually make notes, though I am not sure how copious they are. Projects tend to be ongoing, and don’t really arrive at their destination immediately. It is very rare for me to have a first draft that appears close to its final published form, with the exception of Prop (: Salt 2007) which was mainly written while travelling in .

Usually I compose for the book, or for major sections of a book. For example, Eckhart Cars (: Salt 2004) has something like 18 chapters, each of which is formally distinct from the others, while Prop is a single serial poem, and Rapid Eye Movement (: , 2009) is also a relatively unified piece in its conception.

poetry audiences have expanded over the past few years—both in size and interest, so reading there recently has been enjoyable. It helps to have an audience who is at least familiar with the context in which the work circulates. So I guess it depends on the venue and audience.

I’m not sure what you mean by theoretical concerns in this context, exactly—I guess if one has read, considered, and evaluated streams of contemporary theory or philosophy, these streams are bound to surface in the work somehow. At times I have produced work with a specific theoretical model in mind—for example, some of the pieces in Eckhart Cars were directly influenced by Jacques Lacan’s writings on the “fading subject.” I feel particularly drawn to poetry with foregrounds some kind of intelligent interface with political critique—Jeff Derksen’s writing is exemplary for this approach, though there are of course so many more.

Dickens said a writer should “make them laugh, make them cry, make them wait.” I would add: make them think, but not necessarily in ways they normally use to process information. The fact that poetry is so under-read in our culture (as opposed to supermarket novels) seems to indicate a lack of willingness to engage with anything other than literature as escapism. William Gaddis’ novel Agape Agape is certainly worth reading with this lack in mind.

In my experience, work needs to go to the publisher almost entirely ready for publication. However, editors have been useful in picking up on minor glitches here and there, and have sometimes made very useful suggestions about textual organization and design.

Try to maintain a sense of gratitude. And sometimes you just have to go on your nerve.

This is a question that comes up frequently in the university context, where I research, write, and teach literature, writing, poetics, and theory. The appeal of moving between or among genres, or of producing cross-generic texts, is that writing in various genres enables one to foreground method, and to question assumptions about method for specific genres. This practice also calls into question the reification of disciplinary boundaries, and de-stabilizes normative views about what constitutes “good writing.”

Ideally, I work in the morning. While writing my book on the Toronto Research Group, for example, I woke up every day and wrote intensely, completing a couple of pages before lunch. Then I took the afternoon and evening off. Prop, on the other hand, was written mainly while travelling, where it was difficult to maintain a constant, disciplined practice.

“Why can’t we all just get along?”

All of the above, in one form or another, although I do feel particularly drawn to the visual arts. It never ceases to surprise me how far the “high-street” poetries lag behind visual art discourses in their conceptual development. As Ron Silliman said, “they write like the 20th century never happened.”

I seem to be far more drawn to North American poetry than English poetry, even though I live and work in the . A list of my personal, all-time most “important” writers would probably stem from three very diverse sources: (1) John Cage, whose work I was introduced to as a student at the Ontario College of Art in the early 1980s; (2) Philip Whalen, whose idea of writing as a “continuous nerve movie” still holds importance for me (and perhaps Whalen’s approach has some relevance to my “life outside” work as well); and (3) bpNichol and Steve McCaffery, whose work as collaborators and as individual writers (although very different) opened up so many new avenues for exploration.

Live in a simple but roomy house on one of the southern Gulf Islands in BC with my family, where I would have more time to work and to watch my kids grow up around eagles, whales, big trees etc., and where I would buy a vintage (1960s Ford or GM) four-wheel-drive-pick-up truck that functioned perfectly, so we could get up into the snowy mountains nearby in winter, where we would snowshoe and drink hot chocolate.

I would like to have been a scuba diving instructor or a virtuoso classical cellist or a friendly monk.

I used to paint, but I found that the titles of my paintings were the most interesting part of them, so I just concentrated on writing extended titles.

Camera Lucida by Roland Barthes, because it is at once highly intelligent and deeply moving. ’s Bird Bird is a wonderful little chapbook. I don’t watch films nearly enough anymore, and can’t remember the last one I thought was truly great…I guess Jim Jarmusch’s Dead Man is one of my favourite films.

I am currently collaborating with a Japanese-British artist named Kaz on a video installation about globalization and travel. I am also in the process of completing a book-length project about subjectivity and the proper name, entitled The Persons, which I hope to have published in the near future. An article on Jeff Derksen’s poetics is coming soon in Canadian Literature, and an article on Fred Wah’s ecopoetics is also forthcoming in The Journal of Postcolonial Writing.