12 or 20 questions: with Sharon Harris

Toronto Life calls Sharon Harris “a woman of ethereal interests.” In 2006, Avatar, her first book of poetry and art, was published by The Mercury Press and her first photography exhibition, I Love You Toronto, received national attention. She curates iloveyougalleries.com and iloveyougraffiti.com and blogs at theiloveyoublog.com. Not coincidentally, her current book project is a cultural study of the words, “I love you.” She plays hockey for a team sponsored by record company Sonic Unyon; the number on the back of her jersey is 143.

1 - How did your first book or chapbook change your life? How does your most recent work compare to your previous? How does it feel different?
If you look at photographs from the time when my first book, Avatar (The Mercury Press, 2006), was launched, you might guess that it wrecked me! It happened during the run of my first solo photography show. The exhibition ended up in almost every newspaper in Canada and I gave a month of media interviews for it. At the same time, I did readings to support Avatar, thought I’d have a nervous breakdown, and ate incredible amounts of chocolate. But I’m not complaining—the learning curve was steep and it was great. For one of the launches, I thought it would be a good idea to paint myself purple and pink from head to toe. Maybe it’s healthy that I can’t quite get back into that headspace to recall the exact motivation.
I’ve just finished The I Love You Book, a cultural study of those three little words. Like Avatar, It’s about love and has pictures, but they’re photographs instead of visual poems: same themes, but completely different form.

2 - How did you come to poetry first, as opposed to, say, fiction or non-fiction?
Unrequited love! I was twenty years old and had never thought much about poetry, though I had some vague but strong idea that I wanted “to write.” A poem appeared out of nowhere and I wondered for months if it would happen again. They still show up in the same hallucinogenic fashion, but happily, they’re no longer about unrequited love.

3 - How long does it take to start any particular writing project? Does your writing initially come quickly, or is it a slow process? Do first drafts appear looking close to their final shape, or does your work come out of copious notes?
Sometimes it’s tough to figure out where projects start and where they end! All of my books/art shows/websites are related, so I just write and they figure themselves out. Nicky Drumbolis told me that bpNichol worked in a similar way: when a poem/drawing/whatever arrived, it was filed into one of many projects, and eventually the collections started to look finished.

4 - Where does a poem usually begin for you? Are you an author of short pieces that end up combining into a larger project, or are you working on a "book" from the very beginning?
Usually I get the notion that some pieces look like they’re meant to go together, and then the concept for the project forms. I’ve learned to follow good energy. The only exception is The I Love You Book, for which the idea came first. Maybe that’s why it took eight years to create! 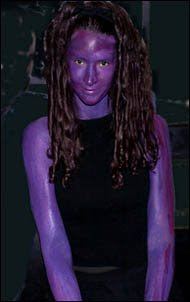 5 - Are public readings part of or counter to your creative process? Are you the sort of writer who enjoys doing readings?
I used to hate them and must apologize to everyone who sat through my early readings. It took a while for me to understand that even when I’m writing without pictures, I write visually: my writing is for the page. That said, I figured out how to have a lot of fun with this at readings—your perceived weaknesses can be your greatest strengths. Sometimes I bring visuals; other times I get the audience involved. It’s fun to chant vowel sounds with a room full of people who weren’t expecting it!
6 - Do you have any theoretical concerns behind your writing? What kinds of questions are you trying to answer with your work? What do you even think the current questions are?
How do I write poems about love that aren’t “love” poems? How do I write words about things and places beyond words? Why am I supposed to only think in black text on white paper? At this point, am I psychotic? I think I’ve taken some sort of Hippocratic Oath, but for writers. First, do no harm. Not so easy, when you’re working with words.
7 - What do you see the current role of the writer being in larger culture? Does s/he even have one? What do you think the role of the writer should be?
If you’re doing what you love, whether you’re writing, fixing cars, baking cookies, or whatever, others will pick up on that. That’s the highest role I can imagine—you’re doing yourself and others a great service. If I start putting on some sort of "lazy tweedy sniffy literati bullshit" writer act, please shoot me. (thanks to Dave Bidini for the description). People often expect it though—avoidance is not as easy as it sounds.
8 - Do you find the process of working with an outside editor difficult or essential (or both)?
Never had an editor I didn’t love. Some highlights: Stephen Osborne at Geist for pushing me when I needed it, Beverley Daurio at The Mercury Press for strong, gentle guidance, and the Torontoist team of Marc Lostracco and David Topping for being brilliant on a regular basis.
9 - What is the best piece of advice you've heard (not necessarily given to you directly)?
bill bissett (to Sandra Alland): “Keep going.” Nicole Brossard (to me): “Keep going.”

10 - How easy has it been for you to move between genres (poetry to more critical prose)? What do you see as the appeal?
I can’t not move between genres. I think in poems, photographs, essays, sculptures, paintings … but can’t write fiction to save my life! I recently figured out that I’m synesthetic, so maybe because I can’t clearly separate colour, sound, sight, emotion, and touch from each other, I can’t work in just one genre.
11 - What kind of writing routine do you tend to keep, or do you even have one? How does a typical day (for you) begin?
There is a sort of routine in no routine. I write when the kids are asleep and in the moments they’re occupied. When I’m out for a run in the park, I’m working. It doesn’t ever turn off.
12 - When your writing gets stalled, where do you turn or return for (for lack of a better word) inspiration?
Stalled? Once I finally got going, it was full speed ahead. Everything is inspiration. 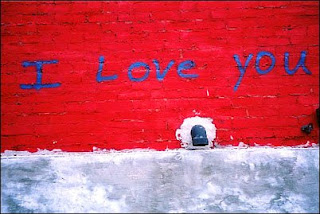 13 - What fairy tale character do you resonate with most?
The average garden variety fairy tale character is a dysfunctional mess, so I’d rather not go there. But I do resonate with fairies as a group. Does Han Solo count?
14 - David W. McFadden once said that books come from books, but are there any other forms that influence your work, whether nature, music, science or visual art?
I think we’re all one, so influences come from everywhere. But kisses, street art, ‘pataphysics, rainbows, small children, playing hockey, Niels Bohr, trees, outer space, and Dave himself are some of my favourites.

16 - What would you like to do that you haven't yet done?
I want to sing, ride a motorcycle, learn to sail, and figure out how to win a faceoff. But first: bring about world peace.

17 - If you could pick any other occupation to attempt, what would it be? Or, alternately, what do you think you would have ended up doing had you not been a writer?
Olympic hockey-playing naturopath/ lavender farmer?

18 - What made you write, as opposed to doing something else?
I think I tried doing everything else, but it didn’t work because I only wanted to write and make art. It took some well-placed graffiti on a bright spring day for me to get that. I’m a late bloomer.
19 - What was the last great book you read? What was the last great film?
It’s not a book yet, but my friend Stephen Roxborough has been sending first drafts from a collection of hockey poems in progress. It’s a thrill to wake up to a fresh hockey poem every morning! I also enjoyed Night Work: The Sawchuck Poems by Randall Maggs. (Brick Books, 2008). I’ve had too much energy to sit through films since 1998. 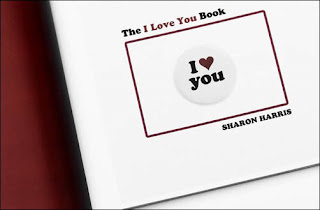 20 - What are you currently working on?
Poetry-wise, I was recently honoured to contribute to an exhibition of women’s visual poetry from around the world called Infusoria (http://infusoria.blogspot.com/). It took place in Belgium, and it was the first show of concrete by women—ever! I’ve got some visual work coming up in the 2009 Spring Issue of Drunken Boat (http://www.drunkenboat.com/), and I think I’ve just started a new collection of poems about serendipity (not planned, of course!). The focus is on finding The I Love You Book a publisher, but I’m embarrassed to admit my terror of having eight years of work rejected. I’m finishing the proposal right now, and there are a few other related projects in the works. I blog about all things, “I love you,” at http://theiloveyoublog.com/.
The I Love You World Graffiti Project at http://iloveyougraffiti.com/ is almost ready to launch. It celebrates the “I love you” graffiti that has appeared across the planet. I’ve been collecting photos and stories from the graf’s admirers through Facebook (http://www.facebook.com/pages/I-Love-You-World-Graffiti/40534399415) and Flickr (http://www.flickr.com/groups/iloveyouworldgraffitiz) and can’t wait to see how it will all look together as a website and as a book. Some of that material is online at http://iloveyougalleries.com/. I’m also working on an illustrated cultural history of rainbows. Two nights ago, some friends and I saw a rainbow after playing hockey. I was ecstatic. One friend remarked that it doesn’t take much to make me happy, and all of a sudden my insecurities about rejection looked very small. I was wearing a rainbow shirt and the moment was a nice reminder to get back to work!
12 or 20 questions archive (second series);
Posted by rob mclennan at 10:02 AM
Labels: 12 or 20 questions, Sharon Harris