The Church in the Wildwood, Glengarry 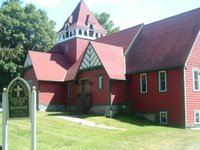 Through working on the McLennan/MacLennan genealogies of Stormont and Glengarry Counties, I've been very interested in the red wooden church right by the campgrounds at Lancaster, the Anglican Church of St. John, the Evandelist, otherwise known as the "Church in the Wildwood" (I can't find any reference to the building on the internet, nor can I find any contact information to ask specific questions…). Built by a strain of McLennans that included a senator, the McLennan Library at McGill, emigrants to Java, a soldier in the American Civil War, and a Member of Parliament, the church was built by Charlotte Mair McLennan, after the death of her husband John McLennan, Esq., otherwise known as John "By the Lake" McLennan, who was Conservative M.P. for Glengarry from 1878 to 1882, president of the Montreal Board of Trade, vice-president of the Merchant Banks, and a director of various other companies, as well as responsible for a number of homes built along the lake by what is now Lancaster South and the Lancaster Campgrounds. Their own property became known as the "Ridgewood" estate, and hosted many parties there in the late 1800s, now made up predominantly of campground, the 401 highway, and a small house tucked away in the woods, with a church and graveyard behind it. As historian Ewan Ross writes in his LANCASTER TOWNSHIP AND VILLAGE:

The Anglican Church of St. John, the Evangelist, (Church in the Wildwood) held its first service on July 21, 1899. This church was erected on the McLennan (Ridgewood) property on the east front of Lancaster township by Mrs. John
McLennan in memory of her husband. Though Anglicans in the area at the time were few in number and the church was almost a private chapel, population change in the next three quarters of a century brought more Anglicans to the community and the importance of St. John’s as a place of worship increased with time. There is
a small cemetery beside the church.

In her non-fiction collection Braggart In My Step, More Stories of Glengarry, author Dorothy Dumbrille goes into a bit more detail, in her chapter "The McLennans by the Lake," starting:

Something more than a mile east of Lancaster, on the Montreal highway, we pass a sign on our right which reads “St. John’s Church.” It is easy to miss the beautiful little building buried in shade, but it is worth while to stop here, for this is the only Church of England in the County.

Built to esemble the churches of England which are maintained by private estates, this one was used by a generation of the McLennan family, primarily for their servants. It is now separate from the property and the small congregation has as
its minister one of the clergymen from Cornwall.

The building is sadly in need of repair but its appointments are tastefully chosen. On the wall near the entrance is a tablet to the memory of John McLennan, father of Duncan McLennan whose home was across the road from the church. The highway now cuts through the middle of the property, leaving the old McLennan home on the left as we travel east, and the church on the right. 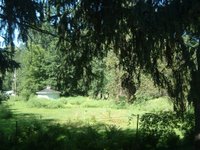 Apart from these sources, there are no other references I've been able to find to the church, the family or the history of the church that give any real information. From what Dumbrille writes, it seems the original house is long gone, with the current house slightly further from the shore of the chapel a more recent addition, but I have yet to find out when and who, and hopefully without having to barge into their front yard with my mother's car. As Dumbrille continues:

Ridgewood, here referred to, is the great brick house behind the church and near the shore of the Lake. It is modern and elegant, surrounded by gardens, with a lawn sloping to the river. This home was built comparatively few years ago and is now out of the hands of the family. It has changed owners many times during the last few years. We imagine it stands just about where the old dock must have been. It affords a view for many miles up and down the Lake and across to the mountains on the farther shore.

Hugh McLennan [brother of John "By the Lake"] married Isabella, eldest daughter of Neil Stewart, third son of Ronald Stewart mentioned in a previous chapter. Hugh’s mother’s father left him a property on Loch Garry which he sold, going up the river to work in a hardware store. In the following year he secured a position as a purser on the St. Lawrence boats, and so began a connection with the traffic of the St. Lawrence which lasted all his life. Everyone travelled by steamboat between Upper and Lower Canada and his duties brought him in contact with all the important and influential men of his time: The Honourable John Hamilton of Kingston, Sir David MacPherson, Mr. Luther Holton and Sir John A. Macdonald, Cartwright and others. In 1848 he was, during winter, agent for the stage coaches. What a colourful occupation that was! Finally he went into business for himself and, in due course, married Isabella Stewart at the home of her aunt, in Bytown.

The gradual climb to prominence and wealth of this able and distinguished man would, in itself, fill a book. He and his brother, John, became interested in the Beaver Line. Hugh McLennan became President of the Board of Trade and then member of the Harbour Commission, as representative of the Board of Trade, a position he held for twenty-five years. Finally, he became Director of the Bank of Montreal in 1882 and a Governor of McGill. He died in 1899.

John "By the Lake" McLennan, esq., was the great-grandson of Farquhar McLennan and Isabella McRae, and grandson of Murdoch McLennan, who was one of the original 1802 settlers of Glengarry County, Ontario. As John wrote in his piece “GLENGARRY. Its Early Settlement and Incidents Connected Therewith” in The Glengarrian, [a precursor to the current Glengarry News] December 24, 1885:

…My grandfather, Murdoch McLennan, gave up a valuable holding on the Seaforth estate, in order to keep with his friends and neighbours who were emigrating. They were 1100 souls in the vessel, and were four months at sea, encountering wintry weather on the coast of Labrador, a rough introduction to the New World. My father (John McLennan) was but thirteen years of age; he had the good fortune to have been at school up to that time. At the call to arms in 1812 he enlisted in the Militia, with the appointment of sergeant. He was with the company in the march across the ice and the taking of Ogdensburgh, and became Lietenant and Quartermaster at the close of the campaign. After the war, he taught for several years the school at Williamstown, which continues as a High School under the present system. In 1823, he retired to “hew out” a farm in the woods of Lancaster, and was at the same time appointed to the Commission of the Peace. He commanded a company for frontier duty in 1838-39 and died in 1866.

Of the few dozen McLennan/MacLennan strains I've seen throughout the two counties, this one has easily the most stories I've found, ranging around the world, and oddly, is one of the few that I haven't really found any descendants of. Where did they all go? Certainly, the name married out in a number of places, making descendants harder to track, as well as the fact that some ended up in Boston and other places, increasing the difficulty of researches. Considering they had such status but a century ago, written about almost weekly in The Glengarry News, of garden parties at their Ridgewood Estate, travels and other activities, how could they have disappeared so completely?
Posted by rob mclennan at 12:30 AM

Hello Rob;
These comments may be late as I only just discovered your blog. I was born and raised just down the road from St. John's and attended the church through my younger life. My Grandfather, Thomas Liddell Upton, worked for the McLennans as a coachman and later as a gardener. He was one of the McLennan tenants who helped build the church. My father, Cyril Thomas Upton, was a chauffeur for the McLennans in his youth (as was his brother Garnet) and he and his wife Christena (Rena) were lifetime members of the church. My father served as a warden and caretaker for many years and he, my brother Stuart (and on occasion, myself) were bell ringers. My brother still lives in Lancaster and is quite involved with St. Johns. I'm sure he'd be pleased to impart some of his knowledge of the church and the McLennan family. If you contact me though my email I can provide you with contact information.

hey sir; thanks! although i would need your email to be able to respond; mine is rob_mclennan (at) hotmail.com

Did you receive the message I sent regarding my ancestor John McLennan?

I’m so happy to stumble upon this thread.. I listed the McLennan home this week and it’s had me intrigued since I step inside the home. I’ve been trying to dig up as much history of the home as possible, not really for the sale but more for my own knowledge. It’s the 6000 sq ft one on the north side of the highway. What an impressive property! I love who it hasn’t been butchered over the years. If you send me your email, I’ll send you some pictures. tanyaflaro@hotmail.com