[…] is a lyrical unraveling of the circuitry of gender and speech, defiantly making space for bodies that have been historically denied their own vocabulary.

“i care so much abot the whord i cant reed.” In feeld, Charles stakes her claim on the language available to speak about trans experience, reckoning with the narratives that have come before by reclaiming the language of the past. In Charles’s electrifying transliteration of English—Chaucerian in affect, but revolutionary in effect—what is old is made new again. “gendre is not the tran organe / gendre is yes a hemorage.” “did u kno not a monthe goes bye / a tran i kno doesnt dye.” The world of feeld is our own, but off kilter, distinctly queer—making visible what was formerly and forcefully hidden: trauma, liberation, strength, and joy.

The effect of her language is both jarring and musical, and quickly forces the reader to slow down considerably, comparable to first experiencing the work of Canadian poet bill bissett, or Anthony Burgess’ classic novel A Clockwork Orange (1962). How does one easily read, except for slow, and with a deep attention? For Charles’s feeld, language is the engine that propels the work, as well as a means with which to examine, as she writes as part of the “Author’s Note”:

A tran learns early such resemblances, familial or otherwise, will leave us. Only some garment left, stuffed in our open mouths. At best, and after much labor, a tran may be assigned the I of woman, while also having, to varying degrees, to receive and reject the violences constituting it. It’s aesthetics: a tran is a thing exactly the size we demand. And her promise—of legibility, of entrance—is likewise an assignment, requires gatekeepers, equivalences, and pharmacies.

The limits of this scene, like any totalizing structure—gender, property, and so on—construct an interior as much as they obstruct one. Not just possibly, but essentially. It is true, especially now, when political representation is overdeterminative, when interest in conflated with access, visibility with autonomy, we must remember the line we trace conceals even as it discloses. 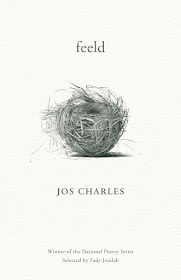 There are elements of feeld, also, utilizing an older language (and all the implied, inherent baggage that comes along with) as an exploration of being transgender (reclaiming that language, as well as utilizing as a counterpoint) that are comparable to Chase Berggrun’s recent erasure of the Victorian novel Dracula, reworked as a reclamation and reconstruction of gender and the body. Composed during Berggrun’s own gender transition, the result was the stunning debut poetry title, R E D (Minneapolis, New York, Raleigh: Birds, LLC.: 2018) [see my review of such here].

Composed as a single unit, constructed in sixty numbered lyrics (numbered via Roman numerals), all but one that exist on a single page, the lyric of Charles’ feeld is staccato, whip-smart and inventive, fearless in its intimacy, and declaration of an open heart, writing not of becoming, but revealing. In a recent interview at Divedapper, conducted by Kaveh Akbar, Charles responds:

With feeld, it’s slightly different because it’s less like an exaggeration of this world. It’s a world that exists quite like ours, but it took a slight turn, so things are off-kilter. That’s reflective of how anyone comes to write or speak, I think. You choose, or you come across, or are given the texts, your sex, your family. And maybe you choose a different family, imagine other texts or sexes, or maybe you take up what you’re given. You reject it or choose it, or any number of possibilities, and you end up with something like a history that, yes, participates in these broad structures, but also remains quite distinct and idiosyncratic.

I wanted to embrace and run with all of the idiosyncrasies, the ways that gender or language are or aren’t similar to what they are presumed to be for me, and to push that as far as I can. Of course, I wanted to keep it within the realm of intelligibility to a reader, or at least clear enough that it doesn’t shove them out of the work at any point. Like, in Safe Space there’s this line, “red like an apple or photograph of an apple,” where the ‘I’ is a child and they’re embarrassed or ashamed or whatever it means as an expression for someone to be ‘red.’ Which, of course, carries with it tons of other connotations and power and so on. But for me, this idea of the photograph of the apple has a personal resonance. It needn’t be explained, and I find it much more effective unexplained. The challenge is to render the image in a way that’s immediate and carries that weight without betraying it in language. To me, that’s the same gesture that’s happening again and again in feeld, it’s just that I’m taking a little bit more liberty, which means I have to back off with taking liberties in some other instances, so as to keep it intelligible.