I’m reading a book by Margaret Atwood called Blind Assassin because I was looking for the phrase “blonde assassin” from an Emily Dickinson poem in which it’s a bee and I happened upon this book at the library. It’s a Downton Abbey-type tale that takes place in Canada, Port Ticonderoga. The rich man is a manufacturer of buttons. Among the rich men I’ve men one made bobby pins, one shower-curtain holders, and one cassette-tape containers. Another Velcro.

The first collection of American poet Bernadette Mayer I’ve really spent proper time with is her Works & Days (New York NY: New Directions, 2016). The author of dozens of titles over the past five decades, she’s now seven with New Directions, including The Bernadette Mayer Reader, The Helens of Troy, NY and Poetry State Forest. The poems in Works & Days alternate between more traditional lyrics and short sketches, most of which are situated via a sequence of title-dates. Meyer’s titles exist as openings toward what occurs throughout the poem, expanding and furthering upon that initial invitation to explore, whether “May 1,” “I Am a Coyote” or “James Schuyler’s Road Show,” that ends:

[…] you can’t figure out who all
the people in your dreams are
everybody drinking
coffee had their own pot, I say I’d like a little
coffee in a big cup but I just get sips of other
people’s
Lewis has to listen very patiently
To what Anne is saying
I dream I bring back
From the dream some iced sprite from the kiosk
In front of every elevator door in Peggy’s
Ancestral building
Turns out we’re at 88th and DeMott
We pass a sign: Soon there’ll be a junk shop here,
I explain that like those liquidation signs, it’s
not necessarily true, I buy a knitted shirt that
says: Look Up At The Sky around the collar –
who should it be for? 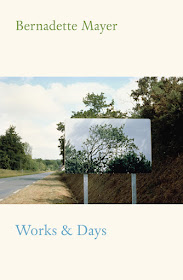 Subtitled “Spring Journal,” she dates the pieces in Works & Days from “March 20 to June 21,” setting the entire collection up as a day book, and one might presume that her intentions are to believed, composing the entire collection during that specific three month period. How does Mayer spend this particular spring? Writing lists, observations, sketches and responses, including responses to her reading, walks, particular dates on the calendar, dreams, reminiscences, travel and the weather. And yet, her short narrative pieces are hardly straightforward, offering commentary and observations that have come from decades of writing and attention, such as in the poem “May 2,” that includes: “The one thing Aristotle was / right about was metaphors. C’mere all you similes, don’t go too far! And / don’t forget to floss! Like Bernadette Mayer, she was an anarchist but / not the bomb-throwing sort. Grackles are Donald Trumps.”

Alice’s Driveway Is a Tree

There’s an intriguing kind of openness to Meyer’s work, one that seems to emerge from both an intellectual and formal restlessness, madly moving and searching into every direction, even as she attempts to remain stock-still. It’s something she hints of in an interview conducted in 1998 by Lisa Jarnot for the Poetry Project Newsletter (included in the recent anthology WHAT IS POETRY? (JUST KIDDING, I KNOW YOU KNOW), INTERVIEWS FROM THE POETRY PROJECT NEWSLETTER (1983 – 2009) [see my review of such here]):

LJ: What did you think of Language writing?
BM: Well, I encouraged it. I never thought it would reach these proportions. I always thought it was a great idea. I’m for all kinds of writing. I never knew Language poetry would become so exclusive. I mean Language poetry is fine, but it’s one kind of poetry. Someone said to a friend of mine recently, “Your book is filled with all different kinds of poetry.” I mean, why not? Are you supposed to write only one kind of poetry? I don’t think so. I love Louis Zukofsky’s translations of Catullus, which are not translations, they’re just mimicking the sound of the Latin, and they’re beautiful, they’re great. What Americans really seem to find difficult is when something doesn’t make sense. They find it really hard and boring, what’s it all about? It seems like you can just enjoy the sounds of words without any other meaning rearing its ugly head. Why bother. Who cares? It’s just that people watch TV and they’re made to think that things are very simple and clear, because that’s the way they are on TV and everyone thinks that everything should be that way.