12 or 20 questions with Keegan Lester 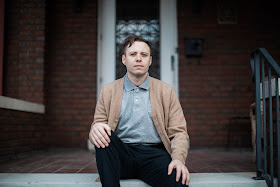 Keegan Lester [photo credit: Christopher Jackson] is an American writer. He's been featured on NPR, CBS New York Radio, Marshall University Radio, Chapman University Radio Coldfront and The New School Writing Blog among other podcasts and blogs. His work has been published in The Boston Review, The Adroit, Boaat Journal, CutBank, Sixth Finch and Phantom Limb among others. He earned his MFA from Columbia University.  His first collection of poetry won The Slope Editions Book Prize judged by Mary Ruefle and is available for purchase at http://www.spdbooks.org/Products/9780988522152/this-shouldnt-be-beautiful-but-it-was--it-was-all-i-had-so-i-drew-it.aspx

1 - How did your first book or chapbook change your life? How does your most recent work compare to your previous? How does it feel different?
"Change" might be a little bit of a strong word, but I think the book has been a vehicle needed for the outside world to give this writing thing I’ve been doing for a while, some credence.  I wrote another collection of poetry that is still in the process of finding a home and recently I read some of those poems to my partner and she said “These are so freaking sad”. I think my earlier work hinged on heavy doses of sadness with moments of humor, whereas the work in the book seems to be more level, more thankful and at times even joyous. The poems I’m working on now are different from those categories, but I’m not sure I’ve had enough time yet to process the how yet.

2 - How did you come to poetry first, as opposed to, say, fiction or non-fiction?
I used to write letters to my grandmother when I was younger, and sometimes those letters would have poems in them. She still has my first poem hanging on her wall from when I was about seven.  As I grew I was both very against but drawn to the poetry I read in school, most of which was institutionalized garbage. I knew poetry was more than finding a symbol or explaining what a metaphor is. At some point I began to write songs and it wasn't until I was in college, in a non-fiction class listening to a Nikki Giovanni poem “Quilting the Black Eyed Pea (We’re going to Mars)”, where I understood that this other kind of poetry existed. I knew listening to that poem that this was I wanted to do. It was a moment where I didn't realize poetry could be that way, which keeps happening. I think what I love most about poetry is the discovery that when I think I’ve figured it out as a form, I come across something where I say to myself, “I didn’t realize you could do that!”

3 - How long does it take to start any particular writing project? Does your writing initially come quickly, or is it a slow process? Do first drafts appear looking close to their final shape, or does your work come out of copious notes?
It depends on the poem.  I’ve written poems in 15 minutes, that have been published in big journals,  but there are also poems I’ve worked on for years. I had to learn in my revision process how to not revise the poem out of the poem.  How to sit on work and give it time for me to process what it really is.  My book is mostly comprised of my earlier writing, much of which I thought I’d thrown away. I recently discovered a magic flash drive with all of the work I'd compiled from undergrad and grad school. I came to it now with fresh eyes and was able to objectively see what was wrong with it. Much of the work sat untouched for five years. I’ve figured out how to edit my own intelligence out of my earlier work, to allow the poems to have their own unique intelligence.  I think my younger self had a need to prove my own ability and intelligence, and that often got in the way of the poem. Much of this book took ten years to complete.

4 - Where does a poem usually begin for you? Are you an author of short pieces that end up combining into a larger project, or are you working on a "book" from the very beginning?
Most of my poems start at the lyric and sonic level. They start with a line or a rhythm or cadence, or a strange piece of language that strikes me. I write out of that. I’ve never given much thought to the need to write a specific poem to fit in a specific book, until recently, which is my latest project. This project’s parameters are both monster and muse.

5 - Are public readings part of or counter to your creative process? Are you the sort of writer who enjoys doing readings?
I love reading and tour as much as I can. I probably sell most of my books by reading in front of people. It’s the best platform I have for selling poetry and establishing my personal brand.

In many ways, what literary poetry has done would be equivalent to having musicians work their entire life on an album, and then say it doesn't matter how you play it in front of people, because they will get the idea from listening if they buy the album, and I'm very much against that. I’ve always been drawn to the bands and the musicians and the poets that made me feel something live. The heart of my work comes from that fire. From wanting to convince you, through performance.

While I don’t write specifically for readings, I know how to make a set list. I’m aware of which of my poems are funny, and which poems don’t work in front of people. I prefer reading in bars and music venues. I’ll likely come to your city if you ask me to.

7 – What do you see the current role of the writer being in larger culture? Does s/he even have one? What do you think the role of the writer should be?
The idea of the writer is such a large and abstract concept. In this day and age, with social media and blogs and tumblrs, everyone is a writer. One problem with literary poets is the distance they try to keep between the 100,000 or us and the 318 ish million other Americans. I struggle to get behind writers whose work’s intelligence stems from a place of self gratification as a means to distance themselves from their audience. My place as a writer is much closer to an entertainer or the person that wants to help people come to poetry, not turn them away.  I want to be the poet that encourages others to write rather than make the argument that there are a finite number of poets living and that only special people get to make art. I believe art and writing is for everyone and that no single kind of intelligence should be valued over another.  In my opinion, writers should be observers, people working to build platforms for others, not acting as gatekeepers.

8 - Do you find the process of working with an outside editor difficult or essential (or both)?
I don’t trust very many people with my writing.  I have a couple secret readers and they aren’t poets.  Both are brilliant and I trust them, because they have nothing to gain or lose based on what they say and they know that.  At the end of the day I have to move non-poets and strangers, and they tend to be the most honest about whether something works or not.

9 - What is the best piece of advice you've heard (not necessarily given to you directly)?
Two things from the photographer Thomas Roma:

10 - What kind of writing routine do you tend to keep, or do you even have one? How does a typical day (for you) begin?
I used to be disciplined.  I’ve fallen off that wagon recently with touring and promoting this book.

11 - When your writing gets stalled, where do you turn or return for (for lack of a better word) inspiration?
People. Strangers mostly.  I walk around town and eavesdrop on strangers.

12 - What fragrance reminds you of home?
The smell of my mother’s pork chops stewing in a crockpot is the smell I think of when I think of home.

13 - David W. McFadden once said that books come from books, but are there any other forms that influence your work, whether nature, music, science or visual art?
For me it’s mostly music and film. I’m interested in cadence, music and movement. Films that have had a major impact on my work include: The Fall, Beasts of the Southern Wild, The House of Yes, Many in the 30 for 30 Series, Beginners, Rushmore, It Follows, Stoker, Miracle at St. Anna & I’m Not there, among others.

15 - What would you like to do that you haven't yet done?
Put out an album of music or make a film.

16 - If you could pick any other occupation to attempt, what would it be? Or, alternately, what do you think you would have ended up doing had you not been a writer?
I’d like to make films.

17 - What made you write, as opposed to doing something else?
It was the only thing I knew how to do competently.

18 - What was the last great book you read? What was the last great film?
I read Crapalachia by Scott McClanahan, a couple years ago  and it shook me to my core. I went out and bought and read everything he’d ever written later that week. Joe Halstead also had a great book come out recently called West Virginia.  I also really love the book Gilead by Marilynne Robinson & Man Alive by Thomas Page McBee. The Witch, Moonlight, The 13th, Hell or High Water, It Follows, The Lobster, City of Gold  & Manchester by the Sea were some of my recent favorite films.

19 - What are you currently working on?
A collection of Non-fiction called “It Is Thought that Dinosaurs Once Cooed Like Doves”  and a collection of poems, mostly about California, for my mother.