Barry Schwabsky, Feelings of And

The Smell of Burning Tires

Once before running out of breath
matching sky against sky

scantily represented in the literature
of bridge and tunnel lyricism

a powdered eye
don’t ask me about it now

in an atlas of cold weather
drawn to its inconclusion 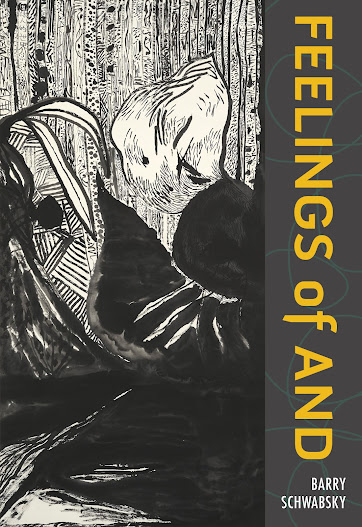 From Long Island, New York poet and critic Barry Schwabsky comes the poetry collection Feelings of And (New York NY: Black Square Editions, 2022), a collection built as a suite of meditative lyrics that weave through commentaries and explorations around history, theory, culture, humanity and psychology. His lyrics are thoughtful, and straightforward with an easygoing manner, and the ease through which his lines flow offer a clarity across complex ideas. “I had to agree that politics is a higher calling than art.” he offers, to open the poem “Conversation with a Revolutionary.” The short poem (but two sentences long), continues/ends: “But not, I / insisted, a more productive one, since the chances of turning out / to have made a good revolution are even less than those of having / made a good painting.” There is a curious back and forth through his poems, neither showing nor telling but easing, prompting and exploring what he seeks to comprehend, his poems existing as documents of what might otherwise seem quick observations. As the poem “Christmas on Earth, Noon on the Moon” ends: “nibbling at some sugar maple gloom / sweet knowledge saved up or drowned / in the stifled promise of an airless year.” The poems sit as minor miracles, offering an enormous amount in small spaces, from sharp lines to sharp observations, all of which are offered in deceptively-plain but clearly a highly-crafted language, all which can only be rewarded further through repeated readings. “just remember,” he offers, to close the poem “Living Within Your Meanings,” “starlings do nothing in moderation [.]”

There is something here reminiscent of the ongoing work of Canadian poet Ken Norris [see my review of his latest here] for the shared aesthetic of the straightforward lyric, offering a poetics of lived experience, although Schwabsky’s is one that offers more in the way of lyric complexity. “We wanted more loveable / gods,” he offers, as part of the opening poem “The Selected Cosmos,” “a blind sky tossed / over distracted misdemeanors. / Or Godzilla, a way of making / radiation visible. But who will tell him / this is poetry?” There is something of the idea that if you wish to communicate a complex thought, offer it through the lens of a poem by Barry Schwabsky.

Strange gestures of musicians. The way a pianist might draw a hand up with resolve, as if to entice some weighty chord to linger in the air just that much longer, or even haul a stray note bodily from the abyss of the keyboard as one would a child that has tumbled into the well. What bothers me is how this useless coaxing sometimes seems to work.