she was in love. she was in pain. a woman in her state needs nutrition, needs soil for her feet. a woman in her state needs a country. aisles. alleyways to roam. in her stillness she dreamed of throttling an orange—throwing her nails into the rind, digging ‘til she felt the crush, juice splitting against her fist while she dug the seeds out, emptied the gut. at the station, she was in a feral state. they called her in for questioning, across the table, she sat. a creature made of acid, sugar, snout, blood. (“ALIEN MISS AT THE IMMIGRATION STATION”) 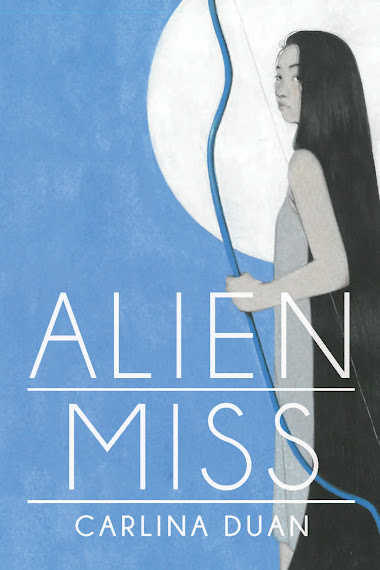 Michigan poet Carlina Duan’s second poetry collection, Alien Miss (Madison WI: University of Wisconsin Press, 2021), is a poetry title composed via lyric narratives, tight lines and observational turns across a reclamation of her family’s language and culture, working to reconcile two entirely separate selves in a foreign space into a singular body. As the cover copy reads: “Tracing familial lore and love, Duan reflects on the experience of growing up as a diasporic, bilingual daughter of immigrants in the American Midwest, exploring the fraught complexities of identity, history, belonging, and linguistic reclamation.” In the opening, title section, Duan works through the beginnings of her family’s immigration, citing past versions of racist immigration law that deliberately limited Chinese admission into the United States. “what’s an American dream but / a debt. a price to pay.” (“ALIEN MISS CONSULTS HER PAST”).  The collection is constructed in three sections of lyric narratives—“ALIEN MISS,” “LINEAGE OF” and “INHERIT WHAT YOU CAN”—all aiming to both acknowledge and document the past, and the implications that those racist policies have had across the generations and into the present. As the poem “‘THE SITUATION IS GRATIFYING’” ends: “my father was my father until / I watched him turn his mouth into / a pearl. soundless when the officer / implied counterrevolutionary action & he / said nothing. flattened from my father / into a line of water. they took him away, / made my face river. made / an entire country flood.”

Duan writes a suite of connections between cultures, between two distinct paths, attempting to navigate that unfamiliar, impossible between. “o / chinese god,” she writes, as part of the poem “NONE ON THE ROOFTOPS,” “are you there, are you / smoking? please hear me out. I am / stupid & young & I like your necklace.” She writes the minutae of family and family relationships, of family and cultural lore, and the weight of expectation, and how, so often, those expectations fall victim to the collision of cultures. Alien Miss is a book of outreach, seeking to investigate both the past and the present, seeking out what must not be lost or left behind, and how certain external forces shifted her family in ways that must also be reconciled with. As she writes of her mother, in the poem “MARY,” that opens:

she comes back from work and chooses an English name from
an online dictionary and she is not my mother now but Mary, patron
saint of blue scrubs   she thrusts her fingers into plastic gloves
and opens patients’ mouths   I am spun of floss and alphabet she is
Mary—the M pickles in my gums   patients will trust her
now she says   so should I